Word Study For Today: The Book of I Peter Chapter 4

Devotion: A CALL TO DUTY, ARISE!

This is a charge, a call to duty, a call to arise from the place of complacency, from carelessness and undue ease. The Bible says in Isaiah 32:9(AMP)==>“Rise up, you women who are carefree, And hear my voice, You confident and unsuspecting daughters! Listen to what I am saying.

Complacency is a feeling of contented self-satisfaction, especially when unaware of upcoming trouble.

It’s not a good place to live.

Carelessness will cause you to be unsuspecting that all isn’t well, the way it is supposed to be. It’s a terrible state of being slovenly, sloppy and slack handed. The end of course is very predictable; failure and lack of productivity.

Failure to rise up and take your place, will bring about a total breakdown of law and order in your life. Life becomes chaotic and the original intent of God is seemingly thwarted. >Isaiah 32:13&14(AMP)==> 12)Beat your breasts [in mourning] for the beautiful fields, for the fruitful vine, 13)For the land of my people growing over with thorns and briars– Yes, [mourn] for all the houses of joy in the joyous city. 14)For the palace has been abandoned, the populated city deserted; The hill [of the city] and the watchtower have become caves [for wild animals] forever, A delight for wild donkeys, a pasture for flocks.

Complacency can be terribly costly, and the magnitude can range from mild to colossal. It will cause thorns and briers to spring up in the plantation. Where there once was fruitfulness and fruits, all manner of inedible crops begin to spring up, for there has been no farmer to cultivate the land and tend the plantation.

There will be invasion when the watchmen refuse to take their place at the watchtower. Nothing good happens and the enemy is able to hatch it’s evil plots when the intercessors fail to pray.

Where there used to be joy, pain and all manner of groaning takes over when the homemakers refuse to arise. Jackals and wild animals run riot in the streets when no one is there to ensure they are kept in the bush where they originally  belong.

Imagine the state of anarchy that would play out in the hospitals when nurses and doctors desert their duty posts and they choose to stroll in whenever they like, if at all they come. When the waterworks fail to supply water, life becomes miserable. When the wasteman abandons his post, refusing to pick dirts and waste from dustbins, the community breaks out in epidemics. When the mother neglects the nurturing of the child she gave birth to, hoodlums populate the neighbourhoods. When fathers don’t take their seat, recluse are bred, except someone doubles up on the role. No plane will fly when Pilots (Captains) refuse to fly the aircraft. In all, riotous life is inevitable when each one refuses to ARISE and TAKE THEIR PLACE.

>“Judges 5:6-7 (AMP)==>6)“In the days of Shamgar the son of Anath, In the days of Jael, the highways were deserted, And travelers went by roundabout ways. 7)“The villagers ceased to be; they ceased in Israel Until I, Deborah, arose, Until I arose, a mother in Israel.”

Until Deborah arose, villagers ceased to be in Israel. Highways were deserted. But when she arose, order came back to life. >Judges 4:4-5(AMP)==>4)“And Deborah, a prophetess, the wife of Lapidoth, she judged Israel at that time. 5)And she dwelt under the palm tree of Deborah between Ramah and Beth–el in mount Ephraim: and the children of Israel came up to her for judgment.”

Before she took her place, nothing worked. The oppression of the enemy, no one could quell. Everyone was weak and careless, even the king was complacent. >Judges 4:2-3(NKJV)==>2)“So the LORD sold them into the hand of Jabin king of Canaan, who reigned in Hazor. The commander of his army was Sisera, who dwelt in Harosheth Hagoyim. 3)And the children of Israel cried out to the LORD; for Jabin had nine hundred chariots of iron, and for twenty years he had harshly oppressed the children of Israel.”

Beloved, we need to rise up and take our place. Carelessness is dangerous. We must allow the Holy Spirit to take us back, fill us and set us on our feet. When the Spirit is poured out, fruitfulness and productivity is restored in the field. >Isaiah 32:15-16(AMP)==>15)Until the Spirit is poured out upon us from on high, And the wilderness becomes a fertile field, And the fertile field is valued as a forest. 16)Then justice will dwell in the wilderness, And righteousness will live in the fertile field. 17)And the effect of righteousness will be peace, And the result of righteousness will be quietness and confident trust forever. 18)Then my people will live in a peaceful surrounding, And in secure dwellings and in undisturbed resting places.

of course peace will be the order of the day. Arise! Be alert! Be awake!

>Matthew 13:25-26 (KJV)==>25)“But while men slept, his enemy came and sowed tares among the wheat, and went his way. 26)But when the blade was sprung up, and brought forth fruit, then appeared the tares also.”

Don’t allow tares among your wheat, ARISE, TAKE YOUR PLACE!.

-Worship the King Who never sleeps nor slumbers.

-Pray for 15 minutes in the Spirit of God.

-Pray out to God for mercy in areas of your carelessness and complacency.

-Ask for a fresh baptism of fire from on high, that you may be refilled and refueled to take your place [no more carelessness, make this resolve in prayer]. 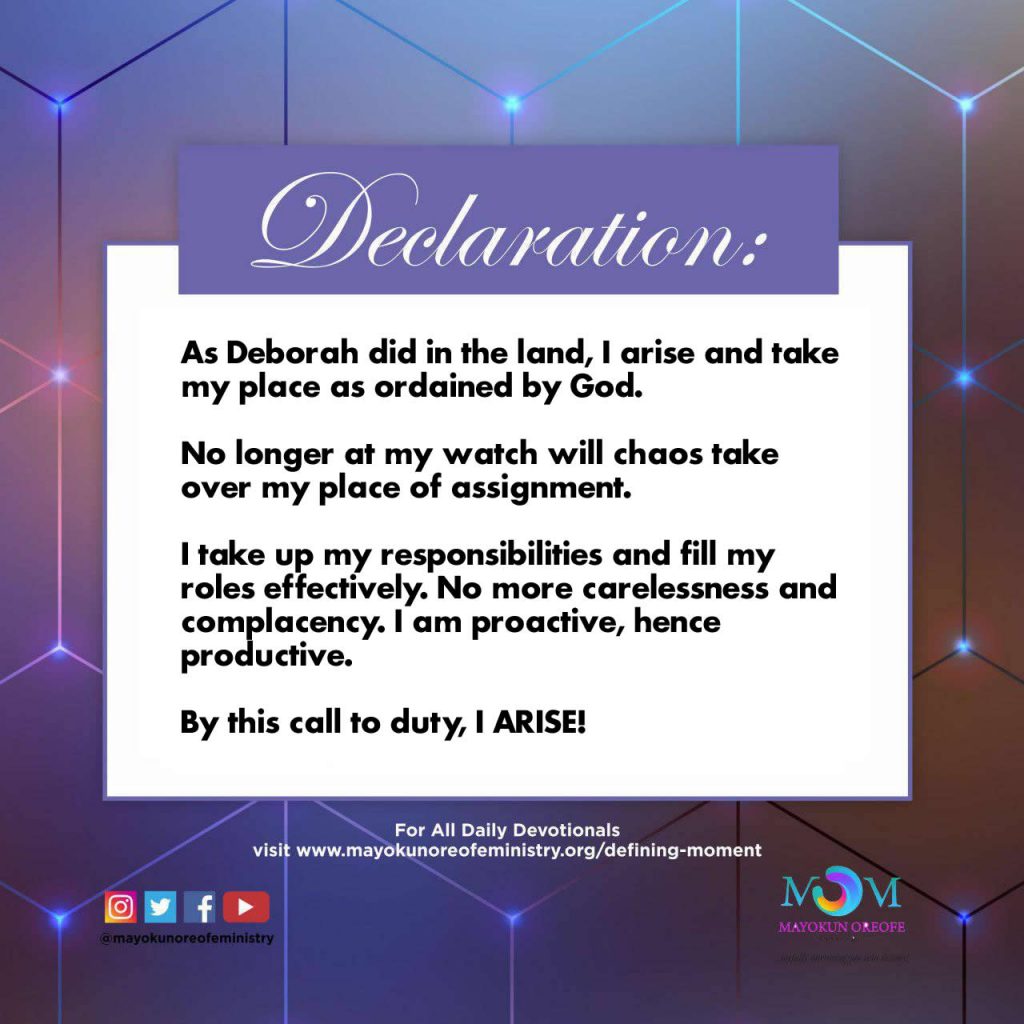