Word Study For Today: The Gospel According to Luke Chapter 21.

Devotion: ACTIVATED WITH THE POWER TO WORK MIRACLES.

Miracle is an awesome and exceptional example of something. An event that appears inexplicable by the laws of nature and so is held to be supernatural in origin.

It is the exclusive act of God’s power. It is clearly a divine intervention; the stepping of God into this side of eternity, causing things to happen. God is the sole power behind miracles [not any mystical/occultic powers]. >John 9:4(NKJV)==>“I must work the works of Him who sent Me while it is day; the night is coming when no one can work.”

Miracles are the work of God; and God in this day is still in the business of doing His work (miracles).

>1 Corinthians 12:28(AMP)==>“So God has appointed and placed in the church [for His own use]: first apostles [chosen by Christ], second prophets [those who foretell the future, those who speak a new message from God to the people], third teachers, then those who work miracles, then those with the gifts of healings, the helpers, the administrators, and speakers in various kinds of [unknown] tongues.”

God empowers His own to do this task on His behalf. >Acts 4:16-17 (NKJV)==>“saying, “What shall we do to these men? For, indeed, that a notable miracle has been done through them is evident to all who dwell in Jerusalem, and we cannot deny it. But so that it spreads no further among the people, let us severely threaten them, that from now on they speak to no man in this name.””

>Acts 3:6-7(NKJV)==>6)“Then Peter said, “Silver and gold I do not have, but what I do have I give you: In the name of Jesus Christ of Nazareth, rise up and walk.” 7)And he took him by the right hand and lifted him up, and immediately his feet and ankle bones received strength.”

The miracle working power of God is bestowed on men, that the wonders of God may continue; and so the name of the Lord may remain propagated.

Miracles will always prevail despite overwhelming odds that come against it.

It always causes an amazement, for it is grace for an uncommon occurrence. > John 7:21 (NIV)==>“Jesus said to them, “I did one miracle, and you are all amazed.”

>John 12:17-18 (AMP)==>17)“So the people, who were with Him when He called Lazarus out of the tomb and raised him from the dead, continued to tell others about Him.18)For this reason the crowd went to meet Him, because they heard that He had performed this [miraculous] sign.”

Miracles are the “go tell it on the mountain” tools. It preaches the gospel with ease.>Acts 28:6, 9NKJV)==>6)“However, they were expecting that he would swell up or suddenly fall down dead. But after they had looked for a long time and saw no harm come to him, they changed their minds and said that he was a god. 9)So when this was done, the rest of those on the island who had diseases also came and were healed.”

>“And all the people saw him walking and praising God. Then they knew that it was he who sat begging alms at the Beautiful Gate of the temple; and they were filled with wonder and amazement at what had happened to him.”

Jesus had rightly said, >…“Unless you [people] see [miraculous] signs and wonders, you [simply] will not believe.””[John 4:48AMP].

There’s a great tendency for people not to believe God is real [and especially that He has authentic servants He has sent to do the work of the Father even as He came to do]. To this end, the gift of the workings of miracle is to be coveted for ease of evangelism and of propagating the gospel. Some will never believe except they see. >John 20:24-25; 27-28)==> 24)“Now Thomas, called the Twin, one of the twelve, was not with them when Jesus came. 25)The other disciples therefore said to him, “We have seen the Lord.” So he said to them, “Unless I see in His hands the print of the nails, and put my finger into the print of the nails, and put my hand into His side, I will not believe.” 27)Then He said to Thomas, “Reach your finger here, and look at My hands; and reach your hand here, and put it into My side. Do not be unbelieving, but believing.” 28)And Thomas answered and said to Him, “My Lord and my God!”

Miracles must be done, for hell to be depopulated even as heaven gains back His creation to Him.

>John 20:30-31(NKJV)==>30)“And truly Jesus did many other signs in the presence of His disciples, which are not written in this book; 31)but these are written that you may believe that Jesus is the Christ, the Son of God, and that believing you may have life in His name.”

-Sing Praises to God most high.

-Pray in the Holy Ghost for 15 minutes.

-Pray that the Lord will bestow on you GIFTS [that of the workings of miracles], that you may do His work.

-Pray that by your doing of His work [miracles], hell shall be dented, whilst heaven is overflowingly populated. 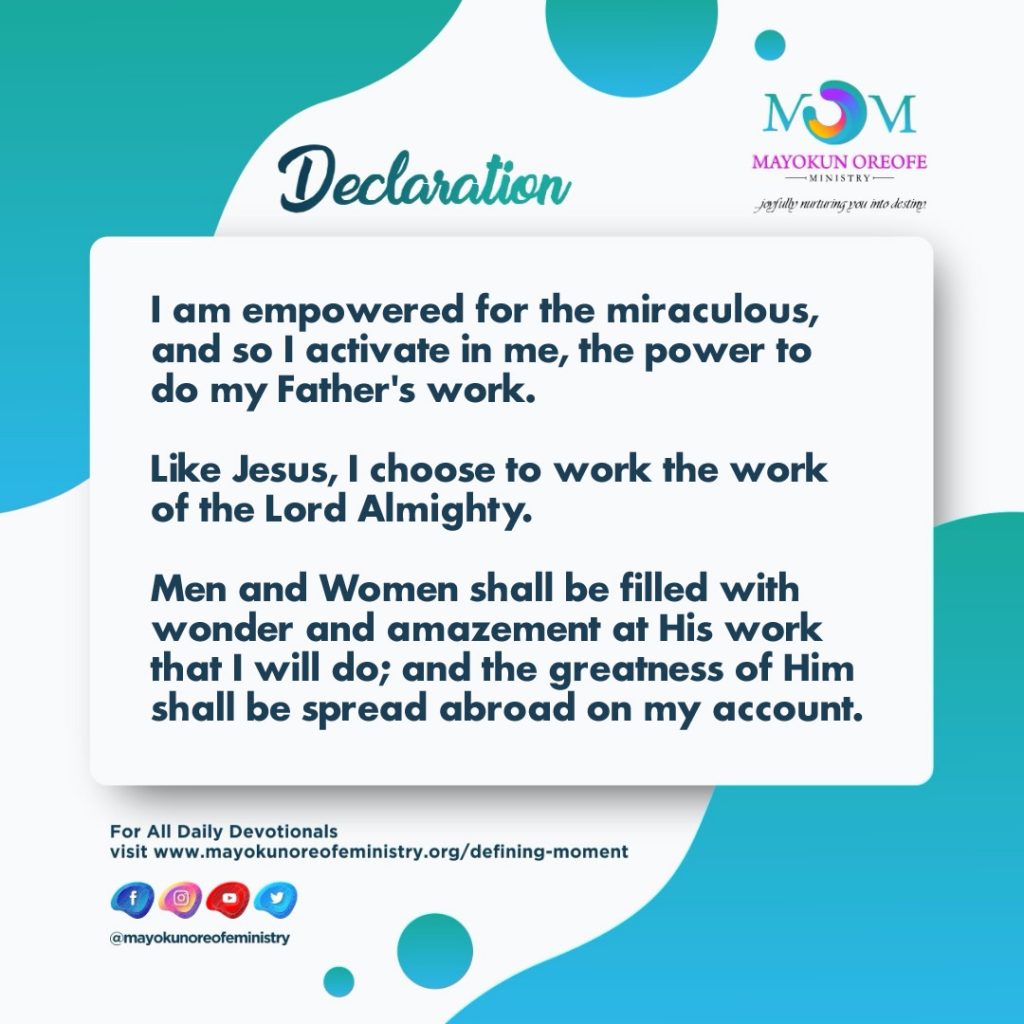