Word Study For Today: The Book of Psalm Chapter 30

For every counsel[purpose,plan, thought] of God there is an appointed time. >Ecclesiastes 3:1 (WEB)==>“For everything there is a season, and a time for every purpose under heaven:” And until that appointed time nothing is made beautiful in that counsel or plan of His. >Ecclesiastes 3:11a (NLT)==>“Yet God has made everything beautiful for its own time…

His plan never materializes except as of course in the time He alone had planned and ordained for its manifestation. Before “time”, it never makes sense. Beloved there is always “a course of time”.

>1 Chronicles 20:4 (NIV)==>“In the course of time, war broke out with the Philistines, at Gezer. At that time Sibbekai the Hushathite killed Sippai, one of the descendants of the Rephaites, and the Philistines were subjugated.”

Ahhhh, I tell you, no other predetermines “time” like the God of heaven and earth. No one foretells what He has not foretold. >Isaiah 43:9 (NLT)==>“Gather the nations together! Assemble the p of the world! Which of their idols has ever foretold such things? Which can predict what will happen tomorrow? Where are the witnesses of such predictions? Who can verify that they spoke the truth?”

>Acts 1:7 (NLT)==>… “The Father alone has the authority to set those dates and times, and they are not for you to know.”

Clearly expressed that time and manifestations in time belongs to Him… yet He has executioners for every plan, thought and intent of His. God will always find a vessel to use in bringing about His desire[plan,purpose, intent].

>Isaiah 46:11 (NKJV)==>“Calling a bird of prey from the east, The man who executes My counsel, from a far country. Indeed I have spoken it; I will also bring it to pass. I have purposed it; I will also do it.”

>Isaiah 46:11 (AMP)==>“Calling a bird of prey from the east, From a far country, the man (Cyrus) of My purpose. Truly I have spoken; truly I will bring it to pass. I have planned it, be assured I will do it.”

Cyrus, God’s executioner. Raised for a course in time.

>Isaiah 45:13; 44:28(AMP)==> ““I have stirred up Cyrus and put him into action in righteousness [to accomplish My purpose] And I will make all his ways smooth; He will build My city and let My exiles go, Without any payment or reward,” says the LORD of hosts.”; ““ It is I who says of Cyrus, ‘He is My shepherd (ruler), And he will carry out all that I desire–’ Saying of Jerusalem, ‘She shall [again] be built,’ And of the temple, ‘Your foundation shall [again] be laid.’””

Cyrus was raised for such a course in time to ensure the accomplishment of God’s purpose for Israel; to rebuild the ruined city of Jerusalem, doing this with all sense of purpose and responsibility, yet making no demand for reward from them(Israelites).

God makes the plan, sets the course in motion, and raises a man to perform and execute His counsel[even if it means calling the executioner from a far country, God will go to any extent to have His desire accomplished].

>Jeremiah 29:10-11(GNB)==>10)““The LORD says, ‘When Babylonia’s seventy years are over, I will show my concern for you and keep my promise to bring you back home. 11)I alone know the plans I have for you, plans to bring you prosperity and not disaster, plans to bring about the future you hope for.”

THE FUTURE YOU HOPE FOR SHALL BE ACCOMPLISHED IN TIME.

Prayer Action:
**Praise God in songs.
**Speak in the language of the Spirit for 15minutes.
-Pray that what is due you in this “course of time” shall spring forth(manifest) without fail…[making it beautiful].
**Pray in the Holy Ghost calling forth by the Spirit of God, the ordained executioner for your manifestations in this season.
**Ask the Lord to bring about in this season that which you have hoped. 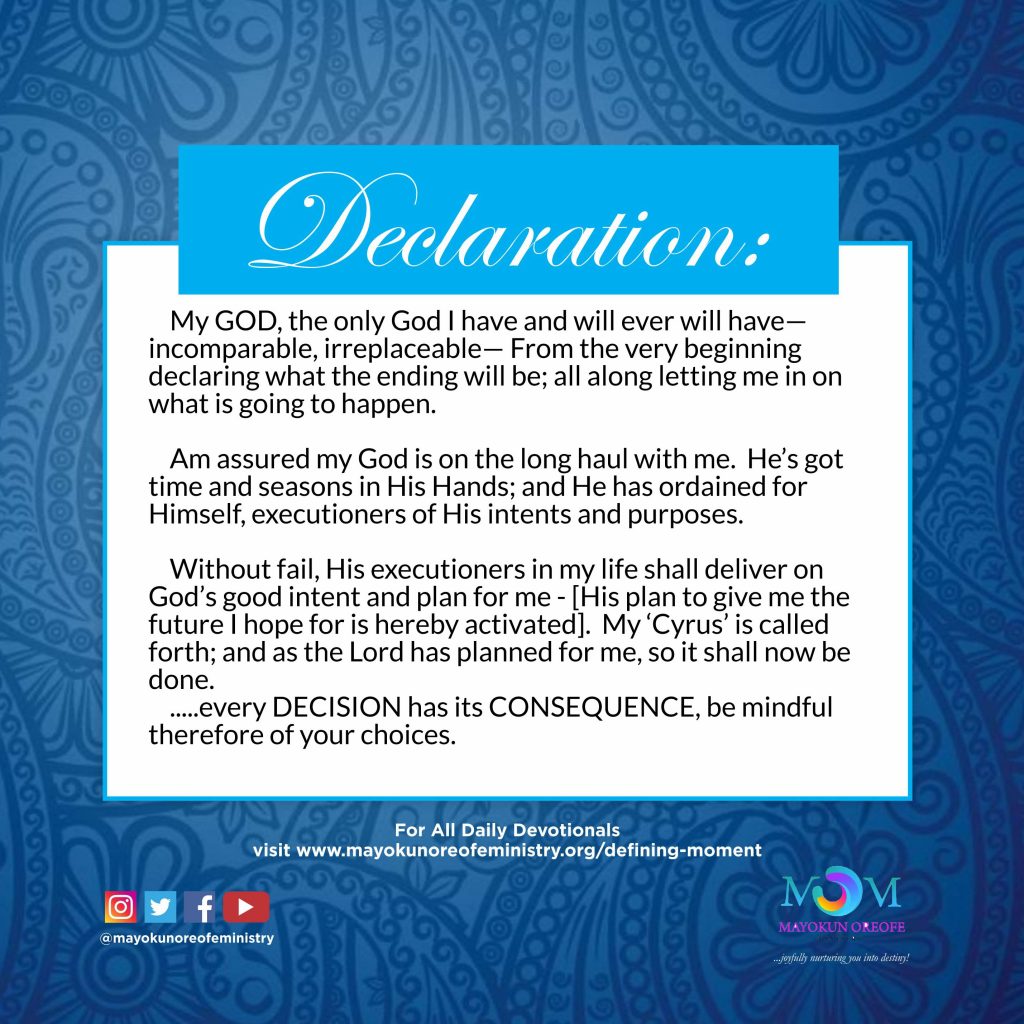