Word Study for Today: The Book of Psalm Chapter 18
Devotion. BE LED BY THE LEADER!

On the journey of life, going it all alone is lonely, stressful and frustrating. Once you are on this side of eternity, you are a traveller, sometimes with clearly defined destination and sometimes destination yet abstract. Whether clear or blurry, your journey is not to be embarked upon alone. You need the Leader[and sometimes He adds on a ‘leader’] to go with you, but He takes the lead of course.

Those days as recalled in the above scripture, God Almighty was the Leader, having Moses as a leader for the children of Israel. The Leader deployed many strategies in leading them; and no matter what the strategies were; yet He was the Leader that divided the sea before His people and led them through the bottom of the sea. It was He Who displayed His power when Moses raised his physical hands(Moses of himself could do nothing), He was the One Who sent His Holy Spirit to be amongst His people. God led His people.

You need that same God on your journey. He is the One Who knows how to get you to destination hitch-free. Besides Him no one else can. Following the voice of another is having yourself set up to be misled. Deuteronomy 32:12 (NLT)==>“The Lord alone guided them; they followed no foreign gods.”

You need to recognize the Leaders voice and follow Him as He leads. If the led does not follow the Leader, he ends up in a mess, wandering around looking for way where there is none.

Little wonder smart Moses, had to drag God at all cost. Moses was so adamant on God taking the lead. Moses realized the fact that not only does He lead, but His strategy of leading is unique hence bringing a mark of distinction on him and his people; distinguishing them from every other existing person. God leads in a unique way. >Deuteronomy 32:10b,11,13-14(MSG)==>10b)“…He threw his arms around him, lavished attention on him, guarding him as the apple of his eye. 11)He was like an eagle hovering over its nest, overshadowing its young, Then spreading its wings, lifting them into the air, teaching them to fly. 13)… GOD lifted him onto the hilltops, so he could feast on the crops in the fields. He fed him honey from the rock, oil from granite crags, 14)Curds of cattle and the milk of sheep, the choice cuts of lambs and goats, Fine Bashan rams, high-quality wheat, and the blood of grapes: you drank good wine!”

He will never let you go hungry on the journey. In leading, He feeds you with choice meal and satisfies you with tasty wine; He guards you as the apple of His eyes. He gets you carried on His pinions as an eagle does. What a LEADER!

Prayer Action:
**Sing joyfully to the Leader of leaders.
**Pray in the language of His Spirit for 15minutes.
**Invite Him as Moses did, ask Him to lead you on your life’s journey.
**Commit specific issues of your life to Him where you want His immediate intervention and leading. 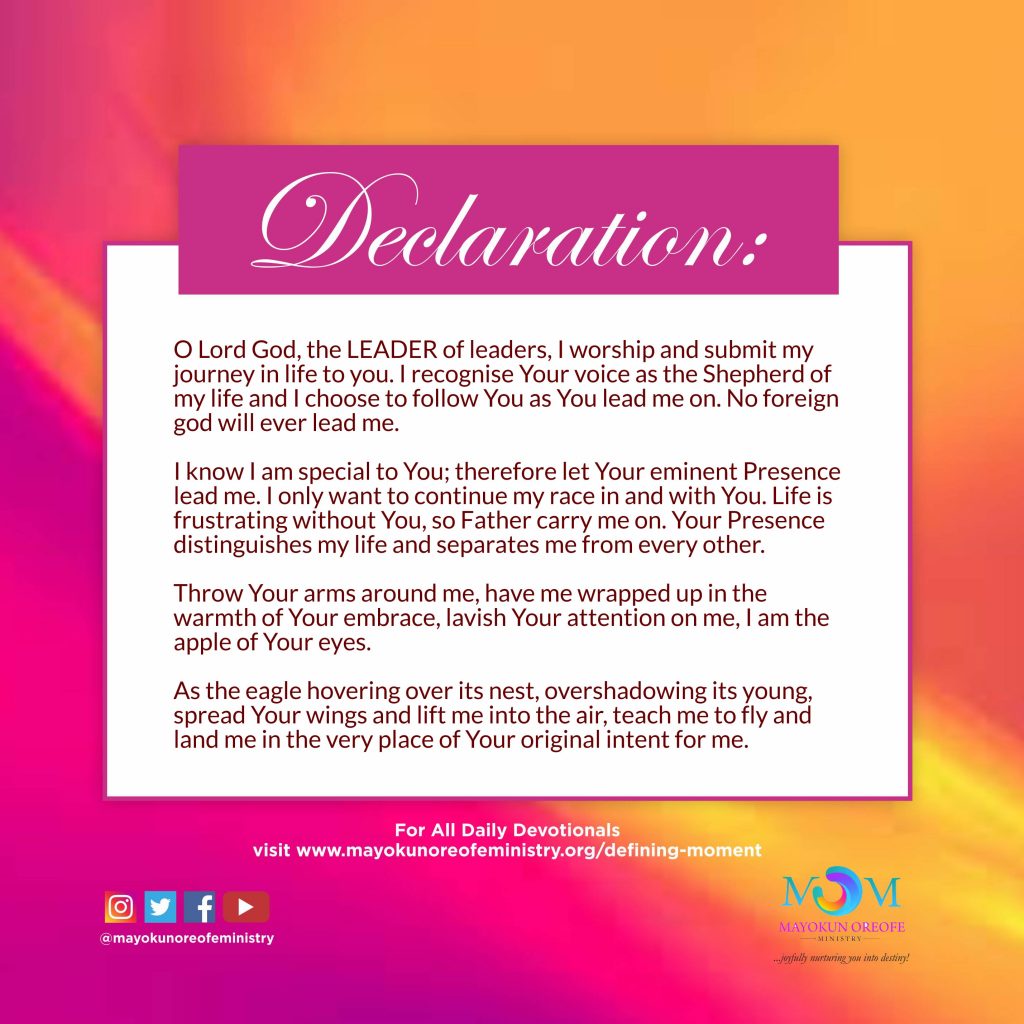