Word Study for Today: The Book of Psalms Chapter 110

Devotion: BE NOT SLOTHFUL.

The slothful is an indolent person, who loafs around [doing nothing particularly useful]. A slothful man is a lazy man, [a sluggish man].

The biblical example of a slothful man is the man with the one talent given to him by his master. Throughout his master’s trip, this lazy brat just tucked his gift away and folded his arms. He did absolutely nothing with the talent given. He was bold enough to say to the master on his return, “I know you are a user, who drives people as your slave. I have kept your talent as you gave it to me. I won’t allow you use me for your gains”(paraphrase) of >Matthew 25:24-25 (AMP)==>““The one who had received one talent also came forward, saying, ‘Master, I knew you to be a harsh and demanding man, reaping [the harvest] where you did not sow and gathering where you did not scatter seed. ~‘So I was afraid [to lose the talent], and I went and hid your talent in the ground. See, you have what is your own.’”

Lazybones, take a cue even from an ant who has no leader nor guide yet never goes hungry. >Proverbs 6:6 (NLT)==>“Take a lesson from the ants, you lazybones. Learn from their ways and become wise!”

If ants can sort themselves out, the slothful has no tenable excuse. The ant works hard in the right season conducive for the nature of his being and ensures he has food stored up to eat even in the rainy season. The slothful will never think of today not to mention preparing ahead for what will happen in future. One major characteristics of lazybones is excessive sleep >9)“…you, lazybones, how long will you sleep? When will you wake up? 10)A little extra sleep, a little more slumber, a little folding of the hands to rest— 11)then poverty will pounce on you like a bandit; scarcity will attack you like an armed robber.”[Proverbs 6:9-11 NLT].

Many are the excuses of the sluggard, he is so lazy to the extent he finds it difficult to even eat >“Some people dig a fork into the pie but are too lazy to raise it to their mouth.”[Proverbs 19:24 MSG].

Laziness sounds like sickness when it gets deep to the extent that to lift the hand into the mouth is considered an herculean task. Who will feed the lazy man? Food is one critical need of human beings; but if someone now becomes so lackadaisical even to feed, then that’s more like a chronic illness. The slothful doesn’t see himself as such. He has reasons for his slouching tendencies. >“The loafer says, “There’s a lion on the loose! If I go out I’ll be eaten alive!”[Proverbs 22:13 MSG].

Common now, say something else more sensible lazy man! Did you say lion on the streets? Do you live in the zoo? How more unserious can the slothful become? Little wonder what belongs to him is unkempt hence wastes away. >“One day I walked by the field of an old lazybones, and then passed the vineyard of a lout; They were overgrown with weeds, thick with thistles, all the fences broken down. I took a long look and pondered what I saw; the fields preached me a sermon and I listened: “A nap here, a nap there, a day off here, a day off there, sit back, take it easy—do you know what comes next? Just this: You can look forward to a dirt-poor life, with poverty as your permanent houseguest!”[Proverbs 24:30-34 MSG].

Poverty is the dividend of a vested slothful life. >“The way of the lazy is like a hedge of thorns [it pricks, lacerates, and entangles him]… >“If you are lazy, you will meet difficulty everywhere… [Proverbs 15:19a MSG; GNT]. Stumbling block is positioned on the path of a sluggard. He never sees the road. >Proverbs 21:25-26a(AMP)==>“The desire of the lazy kills him, For his hands refuse to labor; He craves all the day long [and does no work]…

Why would a man desire and crave for death? But think of it, why won’t he die, when he chooses to loaf away doing nothing tangible with his life? >“He also that is slothful in his work is brother to him that is a great waster.”[Proverbs 18:9 KJV]. An unproductive life is such a wasted life.

Beloved, >11)“Our great desire is that each of you keep up your eagerness to the end, so that the things you hope for will come true. 12)We do not want you to become lazy, but to be like those who believe and are patient, and so receive what God has promised.”[Hebrews 6:11-12 GNB]. >11)“We want each of you to prove that you’re working hard so that you will remain confident until the end. 12)Then, instead of being lazy, you will imitate those who are receiving the promises through faith and patience.”[Hebrews 6:11-12 GW]. >Hebrews 6:12b (KJV)==> …BE NOT SLOTHFUL…” 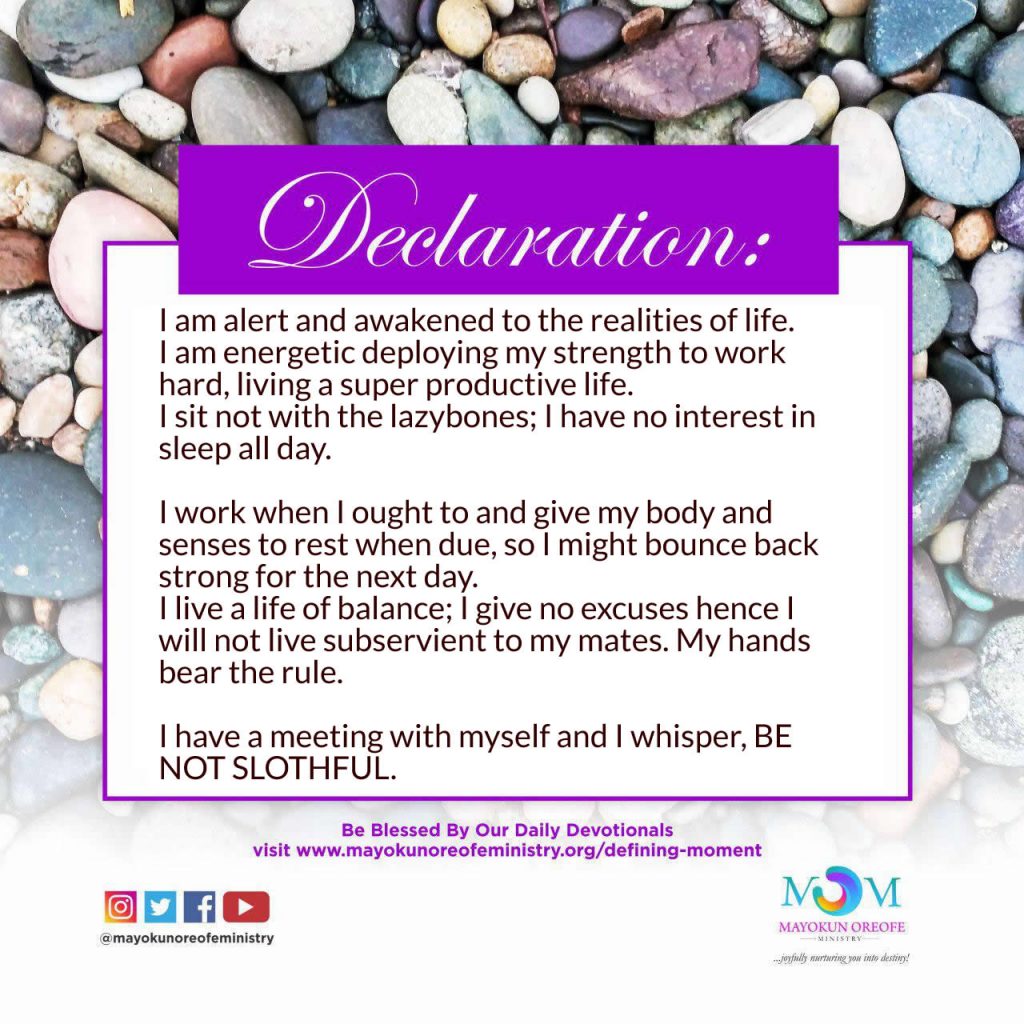