Brethren, let’s consider this carefully, and thoroughly; giving it a very deep and reflective thought. Why would someone want to touch HIM? Why? Selah!

>Mark 6:56 (AMP)==>“And wherever He came into villages, or cities, or the countryside, they were laying the sick in the market places and pleading with Him [to allow them] just to touch the fringe (tassel with a blue cord) of His robe; and all who touched it were healed.”

They were pleading to touch HIM.

To plead is to beg, to appeal or entreat earnestly… [strong words I would say these are]. Why would someone beg, why make an appeal, why entreat (and earnestly for that matter) just to touch. It calls for reasoning.

If the latter is not true, why insist on touching that very person, when touch can be cheap all around you; having many people (known and unknown) to touch.

So I submit, the touch isn’t just about wanting to touch, rather CONTACTING something that’s more than ordinary.

What exactly is in a touch? A touch holds many things; it brings about an impartation, a transference, a sync.

>Luke 6:19 (AMP)==>“All the people were trying to touch Him, because [healing] power was coming from Him and healing them all.”

There’s always a reason/motive/purpose for every venture. The insistence and desperation about touching HIM is because HE has the virtue they need. And since by coming in physical contact with HIM, a transference of what HE has can take place, then it’s judicious to press for a touch.

Jesus possesses what anyone or any situation will ever need or require.

Still on this issue of ‘Touch’; if it’s all just about touching to contact the virtue, then it could also have been okay if they requested for HIM to touch them, as was the case in Luke 18:15-16 (NKJV)says ==> 15)“Then they also brought infants to Him that He might touch them; but when the disciples saw it, they rebuked them. 16)But Jesus called them to Him and said, “Let the little children come to Me, and do not forbid them; for of such is the kingdom of God.”

It’s noteworthy however to understand that there’s a difference between being touched, and to touch. You can be touched by the most powerful, yet nothing may happen to you.

Taking a horse to the river is one thing, the horse actually drinking water is yet another. Getting touched by Jesus does not automatically guarantee healing where there’s lack of  faith [believe]. Determining or pleading to be touched has a unique ingredient (which is the huge lesson here); and that is “FAITH”.

Asking and seeking to get to touch HIM, is vivid expression of the fact that you believe HE has what you need, hence you go after it.

>Matthew 9:20-22(AMP)==>20)“Then a woman who had suffered from a hemorrhage for twelve years came up behind Him and touched the [tassel] fringe of His outer robe; 21)for she had been saying to herself, “If I only touch His outer robe, I will be healed.” 22)But Jesus turning and seeing her said, “Take courage, daughter; your [personal trust and confident] faith [in Me] has made you well.” And at once the woman was [completely] healed.”

Your reaching out to touch, expresses your personal and CONFIDENT FAITH in the one you touch…and that is what ignites the transference that a touch has the ability to effect.

GO AHEAD AND TOUCH HIM TODAY

-Worship the Lord Almighty, All Knowing, All Possessing.

-Pray in the Spirit (for 15 minutes), building up your most holy faith.

-Express your confidence in Christ and His ability (build strength on all you have seen or heard Him do, confirming thereby, that He is able to do all things and anything).

-Go ahead and touch HIM, (reach out to HIM over all the issues/areas of life you need HIS virtue). Express yourself. Switch Faith to action. 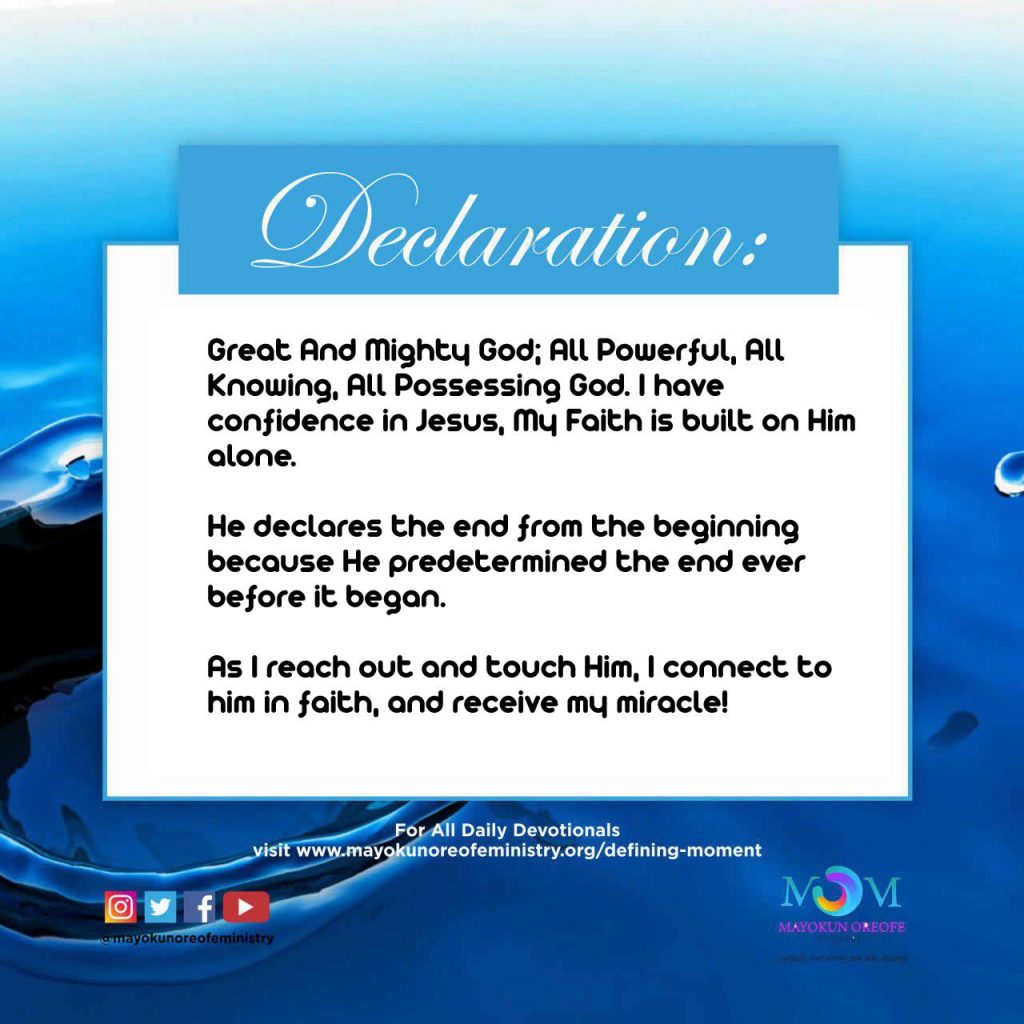