Devotion: HAVE FAITH, EVEN IN THE STORM!

Going through a stormy situation right now, [either physically or spiritually]? Beloved, let your anchor hold secure in Him Who is the Lord over the storm, the unshakeable God. Your sure anchor therefore in the face of the storm, is your FAITH IN GOD.

You may not understand why, but He knows why; it may not even make any sense to you, but the One Who knows the end from the beginning, knows where He is leading you to- (a safe harbour)!

Storms are a part of life and they show up at different levels/phases of our lives, for different reasons. One major thing however is sure, God Almighty is the Lord of the storm, and Lord over the storm. He is not terrified by the storm, rather He uses the storm as His tool.

The chorus of a song reads:

When the oceans rise and thunders roar

I will soar with you above the storm

Father, You are King over the flood

I will be still and know You are God.

Beloved, be assured that, that raging storm will be silenced and hushed to nothing, when the Lord steps in. You need to hold on to God in faith. No storm is bigger than the God we serve. God is not traumatized by the storms (any storm). Haven’t you heard or read that Jesus Christ slept in the midst of a bad storm whilst in the boat on the sea, [not even in the house that is relatively protected, but in the boat, right on top of the water, to the intent that the waters had started sipping into the boat]; yet Jesus was at peace, hence He was resting.

The Bible says >“Suddenly a furious storm came up on the lake, so that the waves swept over the boat. But Jesus was sleeping.”[Matthew. 8:24 NIV] The question then is: when the storm comes raging and FEAR knocks on the door, will FAITH answer for you? (Selah)

Strange, isn’t it? People are normally terrified in the face of the storm. The disciples of Jesus [the likes of Peter and John], were so terrified, they thought of death immediately. >Matthew 8:25(TPT)==>“The disciples woke him up, saying, “Save us, Lord! We’re going to die!”

Jesus found that highly ludicrous, so unthinkable!. How can you think death? There’s power above and beyond the storm, all you need do is deploy it.

The travelers on the sea, the merchants sailing on a trade mission, encountered the storm, they had no choice than to call on the Master over the storm >27)“They reeled and staggered like drunkards; they were at their wits’ end. 28)Then they cried out to the LORD in their trouble, and he brought them out of their distress. 29)He stilled the storm to a whisper; the waves of the sea were hushed.”[Psalm 107:27-29 NIV]

Are you also at your wit’s end, [in business or in any situation for that matter]? Awake with faith, rise up to the task, follow Jesus in His steps, rebuke the storm! >Matthew. 8:26(NIV)==>26)He replied, ‘You of little faith, why are you so afraid?’ Then he got up and rebuked the winds and the waves, and it was completely calm.”▪️

The storms of your life too will come to complete calmness if you will mount up in faith.

Paul was encouraged to speak up, having being assured by the received word  of the Lord. What you know in God will keep you in the face of the storm. Paul said >22)But now I urge you to keep up your courage, because not one of you will be lost; only the ship will be destroyed. 23)Last night an angel of the God to whom I belong and whom I serve stood beside me 24)and said, “Do not be afraid, Paul. You must stand trial before Caesar; and God has graciously given you the lives of all who sail with you.” 25)So keep up your courage, men, for I have faith in God that it will happen just as he told me.”[Acts27:22-25 NIV]▪️

In the face of the storm, crop up the Word of God. What has the Lord said or what is the Lord saying? That should be your first default action in the face of the storm. His Word will give you the courage to face the storm without a thought that you would perish. You will be assured of what will happen right after the storm, [knowing fully well the storm is not to consume you]. Be reminded > Romans 10:17NKJV) says ==>“So then faith comes by hearing, and hearing by the word of God.”▪️

Child of God, what are you hearing? Whose words are you giving attention to? Isaiah is asking>“Who has believed our report? And to whom has the arm of the LORD been revealed?”[Isaiah 53:1NKJV]▪️This is so critical for your victory over the storms of life. Who is speaking to you? What, or who are you allowing to minister to you. Storm is not a strange thing, storms are an entrenched path of life. The way out of each storm is faith in God’s stand per time. If you believe, you shall see His salvation and deliverance. >“And Moses said to the people, “Do not be afraid. Stand still, and see the salvation of the LORD, which He will accomplish for you today. For the Egyptians whom you see today, you shall see again no more forever.”[Exodus 14:13NKJV]▪️>“You will not need to fight in this battle. Position yourselves, stand still and see the salvation of the LORD, who is with you, O Judah and Jerusalem!’ Do not fear or be dismayed…”[II Chronicles 20:17a NKJV]▪️

The storm you are in today, you will see no more, if you would take your stand of faith with, and in God. Jonah ran away from the will of the Lord. He believed not the report of the Lord sending him to Nineveh, he chose his own route and of course, the storm hit. Not until he redirected, having himself thrown out of the wrong ship, salvation did not come for him, [wrong relationships will land you in the storm]. >3)“But Jonah ran away from the LORD and headed for Tarshish. He went down to Joppa, where he found a ship bound for that port. After paying the fare, he went aboard and sailed for Tarshish to flee from the LORD. 4)Then the LORD sent a great wind on the sea, and such a violent storm arose that the ship threatened to break up.”11)“The sea was getting rougher and rougher. So they asked him, ‘What should we do to you to make the sea calm down for us?’ 12)‘Pick me up and throw me into the sea,’ he replied, ‘and it will become calm. I know that it is my fault that this great storm has come upon you.’15)Then they took Jonah and threw him overboard, and the raging sea grew calm.”[Jonah 1:3-4;11-12 &15 NIV]▪️

Note this well, the company you keep determines what you hear, and what you hear determines what becomes of you in the storm. Those with Paul on the ship were in a good company of one who hears the Lord, hence knows what to do and expect in the storm. Again answer this question, who are you hanging with, and whose report do you believe? >33)“Just before dawn, Paul urged them all to eat. ‘For the last fourteen days,’ he said, ‘you have been in constant suspense and have gone without food – you haven’t eaten anything. 34)Now I urge you to take some food. You need it to survive. Not one of you will lose a single hair from his head.’ 35)After he said this, he took some bread and gave thanks to God in front of them all. Then he broke it and began to eat. 36)They were all encouraged and ate some food themselves.”[Acts 27:33-36 NIV]▪️

They had lost hope but by the encouraging words of the one who hears God, they also picked up courage. >“I would have lost heart, unless I had believed That I would see the goodness of the LORD In the land of the living.”[Psalms 27:13NKJV]▪️

Thus says the Lord : > 11)“O storm-battered city, troubled and desolate! I will rebuild you with precious jewels and make your foundations from lapis lazuli. 12)I will make your towers of sparkling rubies, your gates of shining gems, and your walls of precious stones.”[Isaiah 54:11-12NLT]▪️This is for you, are you IN THE STORM? HAVE FAITH!

-Worship in songs, the Lord Almighty.

-Pray in the language of the Spirit that discomfits the enemy.

-Cry out unto the Lord of the storm and regurgitate His word back unto Him, [thereby declaring and reaffirming your faith].

-Boldly rebuke in the manner of Jesus and in His name, every raging or gathering storm in your life. 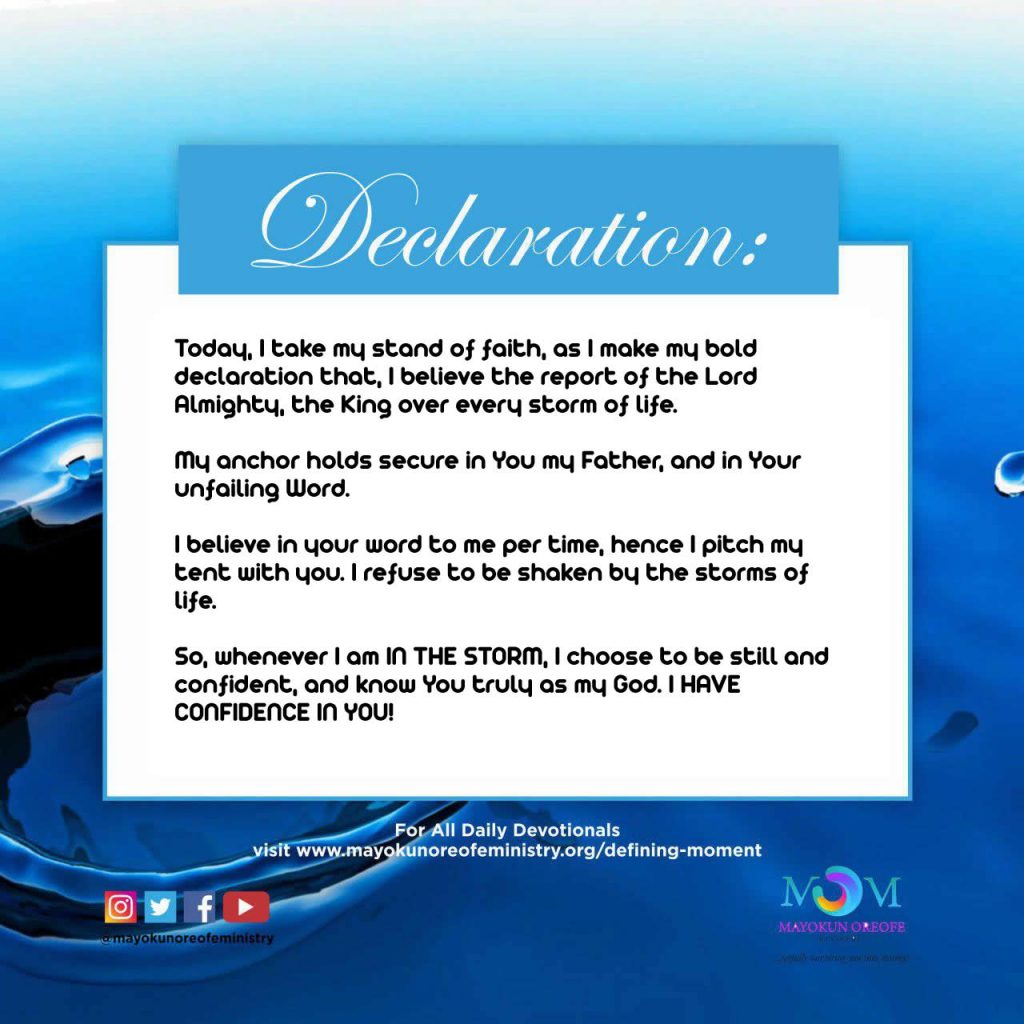