Word Study For Today: The Book Of Psalms Chapter 64.

From scriptures it is so clear God considers disobedience as evil. Rebellion to Him is as witchcraft >1 Samuel 15:23a NLT)==> 23) Rebellion is as sinful as witchcraft, and stubbornness as bad as worshiping idols...” Simply put heaven regards the disobedient as a witch; and no wonder the attending punishment is the wrath of God.

Disobedience is lack of obedience or refusal to comply; disregard or transgression. It is insubordination, indiscipline, insurgence, rebellion, stubbornness; it is violation. God does not take it lightly in any way, and by any means. Every non-compliance with the instruction/commandment of the Lord is disobedience to God, and it is punishable. Just as every course of action in life has its attending consequence so much so does disobedience.

Reading and meditating on Deuteronomy 28:15-68, is scary and alarming. And though the scriptures say in Galatians 3:13(NLT) says ==> “But Christ has rescued us from the curse pronounced by the law. When he was hung on the cross, he took upon himself the curse for our wrongdoing. For it is written in the Scriptures, “Cursed is everyone who is hung on a tree.” Yet Jesus abhors disobedience and did not and even now still does not spare anyone choosing the path of disobedience and rebellion. >Matthew 23:23 NKJV)==> ““Woe to you, scribes and Pharisees, hypocrites! For you pay tithe of mint and anise and cumin and have neglected the weightier matters of the law: justice and mercy and faith. These you ought to have done, without leaving the others undone.”

Leaving God’s instruction undone is rebellion, it is disobedience. You can’t be selective as to what instruction of the Lord you want to obey. Your obedience must be complete. Jesus in His days condemned disobedience; no one today therefore should justify acts of disobedience, nor should any excuse away the consequences of such disobedience. > “Why should you be beaten anymore? Why do you persist in rebellion? Your whole head is injured, your whole heart afflicted.”[Isaiah 1:5 NIV].

The story of Saul will always resonate when it comes to the subject of disobedience and rebellion against God. >1 Samuel 15:18-22 (NLT)==> 18)“And the Lord sent you on a mission and told you, ‘Go and completely destroy the sinners, the Amalekites, until they are all dead.’ 19)Why haven’t you obeyed the Lord? Why did you rush for the plunder and do what was evil in the Lord’s sight?” 20)“But I did obey the Lord,” Saul insisted. “I carried out the mission he gave me. I brought back King Agag, but I destroyed everyone else. 21)Then my troops brought in the best of the sheep, goats, cattle, and plunder to sacrifice to the Lord your God in Gilgal.” 22)But Samuel replied, “What is more pleasing to the Lord: your burnt offerings and sacrifices or your obedience to his voice? Listen! Obedience is better than sacrifice, and submission is better than offering the fat of rams.””

Beloved God is not as interested in any other thing you do for or to Him, as much as He gives regards to OBEDIENCE. Partial obedience is disobedience as far God is concerned. Saul obeyed the instruction he was given partially, he chose to tweak the details given, he adapted it to suit the greed of both himself and those with him. He was asked to completely destroy everything found in Amalek, but the he spared the king and took the best of the sheep and rams. Samuel said “Why haven’t you obeyed the Lord?”

Same Word is coming to us today in any area of our rebellion against the Lord: Why aren’t you obeying the Lord?” Selah!

Obedience is paramount to God. You cannot claim to know God, be His, yet go against His Will. The one you defer to, you obey to the letter. >Titus 1:16 (NIV)==> “They claim to know God, but by their actions they deny him. They are detestable, disobedient and unfit for doing anything good.”

Disobedience against God’s servant is regarded by God as disobedience to Him. A true servant of God is a representative of God [bearing His word, His instruction and His will]; disobeying them therefore is disobeying the One Who sent them. >Numbers 16:2 (NLT)==>“They incited a rebellion against Moses, along with 250 other leaders of the community, all prominent members of the assembly.”

Likewise, God disregards any servant of His who incites His people to disobedience and rebellion. >Deuteronomy 13:5 (NLT)==>“The false prophets or visionaries who try to lead you astray must be put to death, for they encourage rebellion against the Lord your God, who redeemed you from slavery and brought you out of the land of Egypt. Since they try to lead you astray from the way the Lord your God commanded you to live, you must put them to death. In this way you will purge the evil from among you.”

All of us on whatever side of the divide, MUST be careful. >“Let no one deceive you with empty words, for because of these things the wrath of God comes upon the sons of disobedience”

[Ephesians 5:6 NKJV]. >>>Deceive no one, nor allow yourself to be deceived.  Lead no one astray into disobedience and disobey not the Lord in yourself. Take heed brethren, take heed!

“Today, if you hear his voice, do not harden your hearts as you did in the rebellion.””[Hebrews 3:15 NIV].

6)“Therefore since it still remains for some to enter that rest, and since those who formerly had the good news proclaimed to them did not go in because of their disobedience, 11)Let us, therefore, make every effort to enter that rest, so that no one will perish by following their example of disobedience.” [Hebrews 4:6, 11 NIV].

“being ready to punish every act of disobedience, when your own obedience [as a church] is complete.”[2 Corinthians 10:6 AMP].

Beloved give in to God this very day >“Obey me, and I will be your God and you will be my people. Walk in obedience to all I command you, that it may go well with you.”[Jeremiah 7:23 NIV]

Prayer Action:
**Praise the Lord God Almighty.
**Pray in the Holy tongue for 15 minutes.
**Soberly ask the Father for mercy and cleansing against every act of disobedience you have committed(be true to yourself in asking, and do not be like Saul whose pride motivated his plea but wasn’t truly sorry for his misbehavior).
**Receive grace for complete obedience and not partial obedience.

We pray you are blessed by this devotional. We ask that you bless others who might be reading this anywhere in the world; with encouraging comments. Shalom 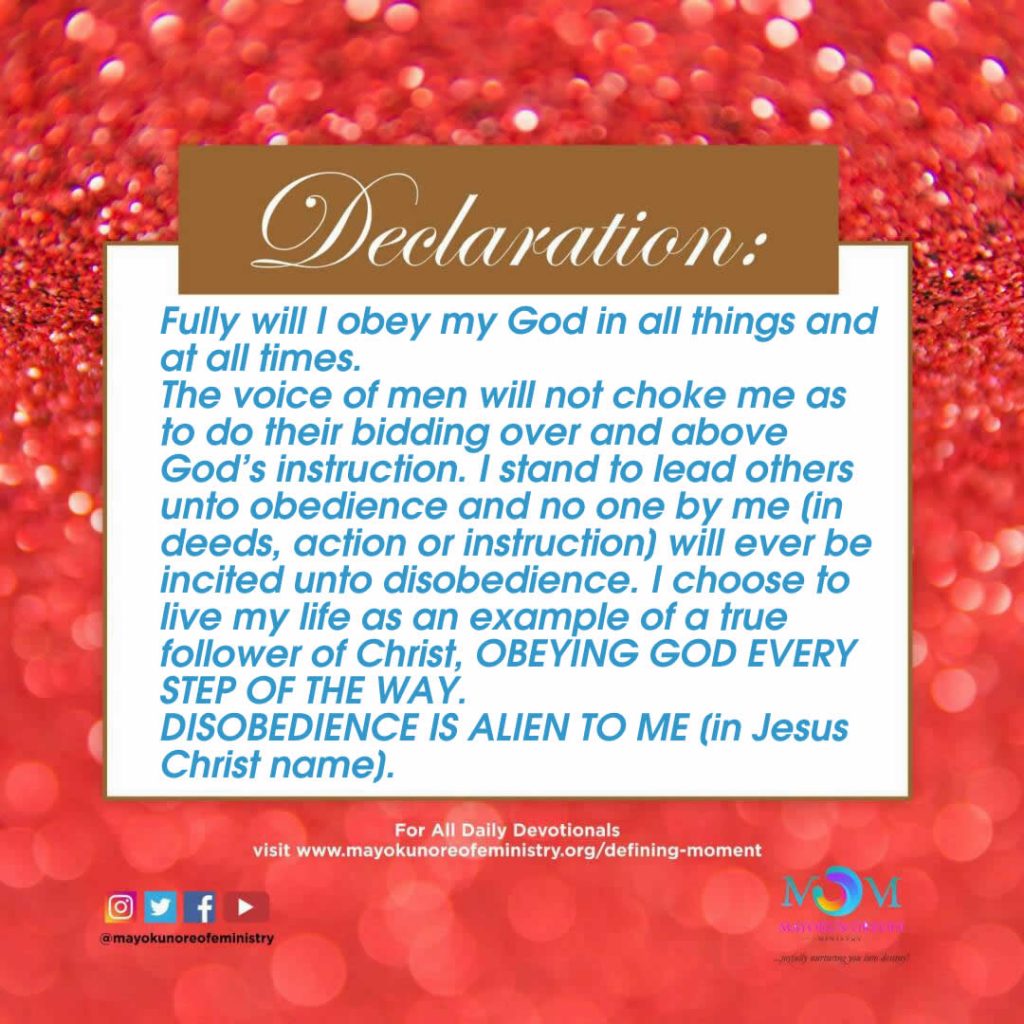