Word Study For Today: The Book Of Psalm, Chapter 101.

Devotion:  DO NOT TOUCH! DO NOT HARM!

Precious is the life of God’s children in God’s hands. He will not allow, neither will He permit any harm that diminishes the value or usefulness of His children. It is not permitted.

Beloved, you’ve got to take God at His Word; when He says there shall no evil befall you, neither shall any plague come near your tent- these are no empty words. He means them.

God is very particular about His people, He will not have them exposed to danger nor allow any evil around them. He has preordained that irrespective of what’s going on with others up close to His own, no bad thing will happen to them. It’s not permitted, evil is banned from God’s people.

To be in danger is to be subjected to harm, [which is a physical injury or mental damage; hurt, moral injury; evil or wrong]. Wow! Scripture says concerning God’s hallowed people of Israel, >“He suffered no man to do them wrong: yea, he reproved kings for their sakes,”[1 Chronicles 16:21KJV]▪️

God disallowed it. No one in and around them was allowed to harm them, not because those people could not, but expressly because He did not allow it. In your life too God is > “Saying, Touch not mine anointed, and do my prophets no harm.”[Psalms 105:15KJV]▪️

Awesome! You are wearing a tag-  DO NOT TOUCH, DO NOT HARM. What does this mean? Touch not? Yes, it interprets harm not. >“Take him, and look well to him, and do him no harm; but do unto him even as he shall say unto thee.[Jeremiah 39:12 KJV]▪️

There’s an express Word that has gone ahead of you;

Do him no harm, touch him not, he is anointed. Beloved, are you God’s own; consecrated, set apart unto Him, blessed, ordained and hallowed? Then NO HARM is allowed in your life. >5)“And he shook off the beast into the fire, and felt no harm.6)Howbeit they looked when he should have swollen, or fallen down dead suddenly: but after they had looked a great while, and saw no harm come to him, they changed their minds, and said that he was a god.”[Acts 28:5-6 KJV]▪️

Paul, the Lord’s [anointed, ordained, sanctified and hallowed], felt no harm, though they looked for harm on him, but God never permitted it because He suffered nothing and no one to harm him or put him in danger. Then it was said of him, he’s a god. Absolutely correct, for>“I have said, Ye are gods; and all of you are children of the most High.”[Psalms 82:6 KJV]▪️

You are a god says your God, so don’t die like men (“But ye shall die like men, and fall like one of the princes.”Psalms 82:7 KJV)▪️

Mere men are harmed, oppressed,  but gods cannot be harmed… God says >“I, the Lord, watch over it; I water it continually. I guard it day and night so that no one may harm it.”

[Isaiah 27:3 NIV]▪️The One Whose you are, is watching over you, giving His angels charge over you, to guard you and lift you in their hands; >11)“For he will command his angels concerning you to guard you in all your ways; 12)they will lift you up in their hands, so that you will not strike your foot against a stone.”[Psalm 91:11-12 NIV]▪️

Understand who you are in Christ, and live victoriously in the consciousness of who you are, and take your stand as the Lord is saying to you >…“Do not be afraid; keep on speaking, do not be silent. For I am with you, and no one is going to attack and harm you, because I have many people in this city.”[Acts 18:9-10 NIV]▪️

-Praise the Lord Who watches over you.

-Sing in the spirit unto God.

-Declare over your life boldly and assuredly in prayer, that the Lord suffers (permits) no one, and disallows anyone to touch you for harm, endanger or do you wrong or evil. ”

-Decree that as it was with Paul, that those who look to see harm on you shall wait in vain, in the name Jesus Christ. 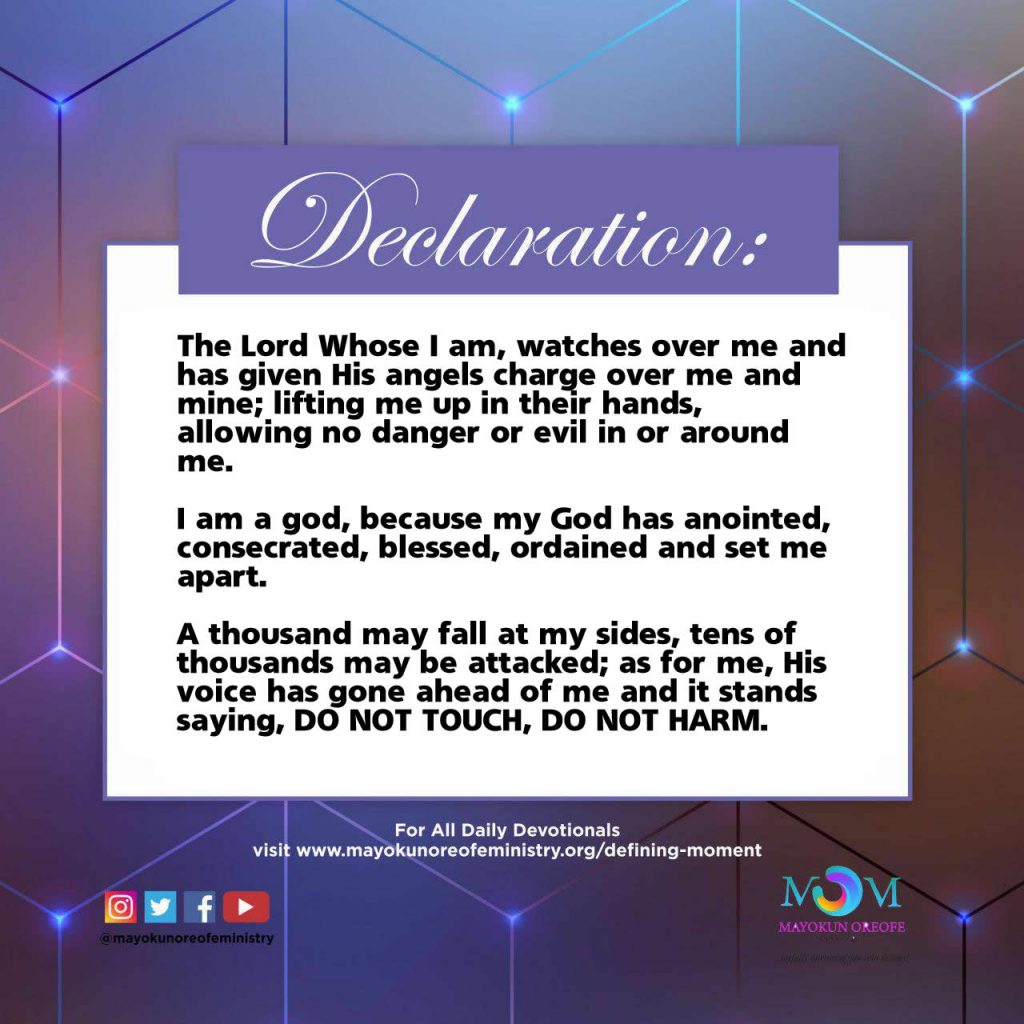