Word Study For Today: The Book Of Psalm Chapter 137.

Knowing the truth is what sets free from the trap of deception. When you aren’t grounded in the word, nor sensitive in the spirit, then the deceiver(whose mission of cause is to deceive) will sweep you off your feet. The Bible says in John 8:32(NIV) ==>“…you will know the truth, and the truth will set you free.’”▪️

What you know will determine the exploit you are able to do, as against being corrupt with flattering for lack of depth in knowledge. Daniel 11:32(NASB)==>“By smooth words he will turn to godlessness those who act wickedly toward the covenant, but the people who know their God will display strength and take action.”▪️

Do not allow yourself to be overtaken by the smooth and slimy words of those who stand against the holy covenant of God(those who lure into corrupt practices, who pamper to sin, who tweak the word of God to suit them and their lust). >“Do not be deceived: “Bad company corrupts good morals.”[1 Corinthians 15:33 CSB]▪️The story of Eve corroborates the warning in this scripture. How on earth should Eve have allowed the serpent into her life, tolerating such deep conversation which obviously negated the word of God[the Truth]. Eve allowed herself to be deceived by the serpent who tweaked the word of God. >3)“But about the fruit of the tree in the middle of the garden, God said, ‘You must not eat it or touch it, or you will die.’” 4)“No! You will not die,” the serpent said to the woman. 5)“In fact, God knows that when you eat it your eyes will be opened and you will be like God, knowing good and evil.”[Genesis 3:3-5 CSB]▪️

Eve believed in a lie and she fell. >“So the Lord God asked the woman, “What is this you have done?” And the woman said, “The serpent deceived me, and I ate.”[Genesis 3:13 CSB]▪️

Be careful, take heed, be sensitive, be at alert, so you don’t get caught in the web of deceit and deceivers. >“But be careful. Don’t let your heart be deceived so that you turn away from the Lord and serve and worship other gods.”[Deuteronomy 11:16 NLT]▪️Deceivers will always shift the boundary lines thereby causing you to err. >“… I fear that, as the serpent deceived Eve by his cunning, your minds may be seduced from a sincere and pure devotion to Christ.”[2 Corinthians 11:3 CSB]▪️Let this not happen to you!

Scriptures forewarns >“…let him who thinks he stands take heed that he does not fall.”[1 Corinthians 10:12 NASB]▪️ >“Your arrogant heart has deceived you, you who live in clefts of the rock in your home on the heights, who say to yourself, “Who can bring me down to the ground?””[Obadiah 1:3 CSB]▪️

Don’t be fooled thinking that you can’t fall prey to deceit. Of yourself, in yourself, by yourself(in your strength), you can’t withstand the deceiver and his cunning words. Thinking you can in yourself, is arrogance and pride, and that in itself first deceives you hence you eventually are taken over by the deceitful ploy of the deceiver in question.

Don’t take on the negative trait of Ephraim, for >“‘Ephraim is like a dove, easily deceived and senseless – now calling to Egypt, now turning to Assyria.”[Hosea 7:11 NIV]▪️

God abhors deceit, why would you fall for it? >“You destroy those who speak falsehood; The LORD abhors the man of bloodshed and deceit.”[Psalms 5:6 NASB]▪️

To this end a cry is made to you even now, DO NOT BE DECEIVED. “You must warn each other every day, while it is still “today,” so that none of you will be deceived by sin and hardened against God.”[Hebrews 3:13 NLT]▪️>“My son, if sinful men entice you, do not give in to them.”[Proverb 1:10 NIV]▪️

Potiphar’s wife enticed Joseph but Joseph kept her out of the way, He never gave in. Despite her pressure, Joseph never gave in. Joseph went to prison on the account of his stand but eternity applauds him. >10)“She kept putting pressure on Joseph day after day, but he refused to sleep with her, and he kept out of her way as much as possible.” 20)But the Lord was with Joseph in the prison and showed him his faithful love. And the Lord made Joseph a favorite with the prison warden.”[Genesis 39:21 NLT]▪️

Jesus never allowed the chief deceiver swindle glory out His path. He countered deceit with the truth. >“Then Jesus said to him, “Go, Satan! For it is written, ‘ You shall worship the Lord Your God, and serve Him only.”[Matthew 4:10 NASB]▪️

Wow! That’s the way to go; way to combat deceit is to put forth that which is written in the book of truth[the Holy Scripture].

Also pray! Prayer keeps you sensitive even as it is answered >“Rescue me and deliver me out of the hand of aliens, Whose mouth speaks deceit And whose right hand is a right hand of falsehood.”[Psalms 144:11 NASB]▪️

The conclusion of this matter >“Don’t be deceived, my dear brothers and sisters.”[James 1:16 NIV]▪️ DON’T BE DECEIVED!

-Pray intensely in the Spirit for 15minutes.

-Ask that the Lord in His mercy will deliver you from every form and similitude of arrogance that can cause you to fall for deceit .

-Pray that you shall be sensitive and not senseless like Ephraim; that you will recognise the lines of deception before it slips you into the mud of sin and failure.

-Pray that like Jesus you will well grounded in the word of truth which combats every lie of the enemy.

-Shout it “I shall not fall prey of deception.” 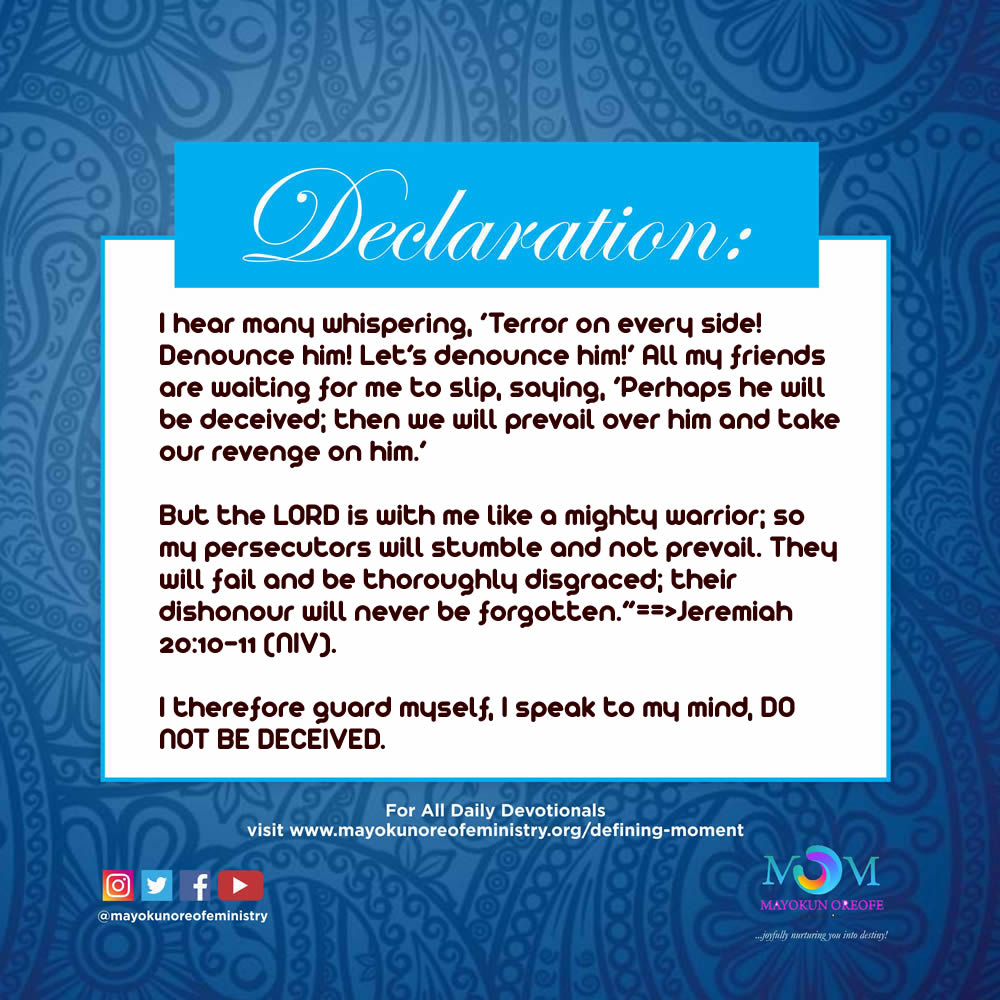