Word Study for Today: The Book of Psalm Chapter 83.

Devotion: DON’T GIVE UP.

The Lyrics of a song says 🎶’ DON’T GIVE UP ON GOD, BECAUSE HE WON’T GIVE UP ON…’🎶.  Beloved we can determine to hit the mark despite all our eyes have seen, and not minding what our mouths have tasted nor all that our hands have handled. Elijah a man if like passion chose not to give up till he saw his desire and pronouncement materialise. >43)“Then he said to his servant, “Go and look out toward the sea.” The servant went and looked, then returned to Elijah and said, “I didn’t see anything.” Seven times Elijah told him to go and look. 44)Finally the seventh time, his servant told him, “I saw a little cloud about the size of a man’s hand rising from the sea.” Then Elijah shouted, “Hurry to Ahab and tell him, ‘Climb into your chariot and go back home. If you don’t hurry, the rain will stop you!’”[1 Kings 18:43-44 NLT]▪️>>> How do you explain having to send his servant seven different times to keep checking the sky if there was any formation(gathering) of the clouds[as a signal if it was about to rain or not]. Elijah never tired out, the zeal of what He planned to see happen had so consumed him, and he was so eaten up by it, hence he kept on without giving up. >“For zeal for Your house has consumed me, And the [mocking] insults of those who insult You have fallen on me.”[Psalm 69:9 AMP]▪️

In his zeal and tenacity, he got what he wanted. Scriptures says in >Galatians 6:9 (AMP)==>“Let us not grow weary or become discouraged in doing good, for at the proper time we will reap, if we do not give in.”▪️

Our Victory is sure if we would damn the discouragements that will rare it’s head on the path of life. If we choose to keep keeping on, giving ourselves to the set-out goal, we shall reap (accomplish purpose, hit the mark, attain) if we do not give in. Tenacity is the cloak to wear if we must make it to finish line. Being tenacious is the ability to hold fast, keeping a firm hold… not easily pulled asunder.

Ruth the daughter in law of Naomi should have turned her back to go back to Moab after all the bitter water life had served her in the household of Elimelech; but she chose to be tenacious. She kept glued to Naomi[just believing that things will change]. >Ruth 1:16-17==>16)Ruth said: “Entreat me not to leave you, Or to turn back from following after you; For wherever you go, I will go; And wherever you lodge, I will lodge; Your people shall be my people, And your God, my God. 17)Where you die, I will die, And there will I be buried. The LORD do so to me, and more also, If anything but death parts you and me.”▪️

She mortgaged her life to Naomi. Resolute without remorse. She was bent on going all the way [ain’t no stopping]. At the end of it all, her testimony proves “we shall reap” if we DON’T GIVE UP. >Micah 7:8 (NKJV)==>“Do not rejoice over me, my enemy; when I fall, I will arise; when I sit in darkness, The LORD will be a light to me.”▪️Indeed it’s not over till it is over. DON’T GIVE UP.

If Deliliah knew how to keep at it not giving up despite her many attempts at getting a hold of Samson’s secret, how much more should we take a cue and press towards the mark of the high calling without fainting in our hearts nor slowing down on the needed corresponding action to accomplishing our goal. >Judges 16:16-17a(NKJV) says==>16)And it came to pass, when she pestered him daily with her words and pressed him, so that his soul was vexed to death, 17)that he told her all his heart…▪️

Another song lyrics comes to mind  🎼 I JUST CAN’T GIVE UP NOW… GONE TOO FAR FROM WHERE I STARTED FROM🎼  Oh no, there is no giving up. Take off line has been left way behind. Don’t throw in the towel, don’t allow the pressure press you flat, resist the feeling of ‘I quit’, go ahead and re-fire, revamp, reboot, hit the ground and run again. >“For a righteous man may fall seven times and arise again…”[Proverbs 24:16a NKJV]▪️

It is said that there’s nothing particularly bad in you falling [or failing], but choosing to stay(remain) where you fell/failed, is a disaster.

Our God is a God of second [and yet many] chances. You can get up and pursue again. Even though Samson died by his own choice, yet he ensured he conquered his enemies. He refused to give up even after it seemed they had gutted him down. Without his physical eyes yet Samson refused to give up. Beloved, DON’T GIVE UP! >Judges 16:22, 26-30 (NKJV)==>22)“However, the hair of his head began to grow again after it had been shaven. 26)Then Samson said to the lad who held him by the hand, “Let me feel the pillars which support the temple, so that I can lean on them.” 27)Now the temple was full of men and women. All the lords of the Philistines were there—about three thousand men and women on the roof watching while Samson performed. 28)Then Samson called to the LORD, saying, “O Lord GOD, remember me, I pray! Strengthen me, I pray, just this once, O God, that I may with one blow take vengeance on the Philistines for my two eyes!” 29)And Samson took hold of the two middle pillars which supported the temple, and he braced himself against them, one on his right and the other on his left. 30)Then Samson said, “Let me die with the Philistines!” And he pushed with all his might, and the temple fell on the lords and all the people who were in it. So the dead that he killed at his death were more than he had killed in his life.”▪️

You can’t afford to give up; [it is too expensive] so, DON’T GIVE UP!

**Worship the Lord of heaven and earth.

**Speak in the language of the Spirit for 15minutes.

**Pray that Lord Almighty will encourage your heart this day [pray out every discouragement, weariness etc].

**Ask for fresh grace to keep on keeping on[tenacity].

**Pray that the Lord will cause you to see the travail of your soil and you will be glad even as Ruth was glad at the end of it all. 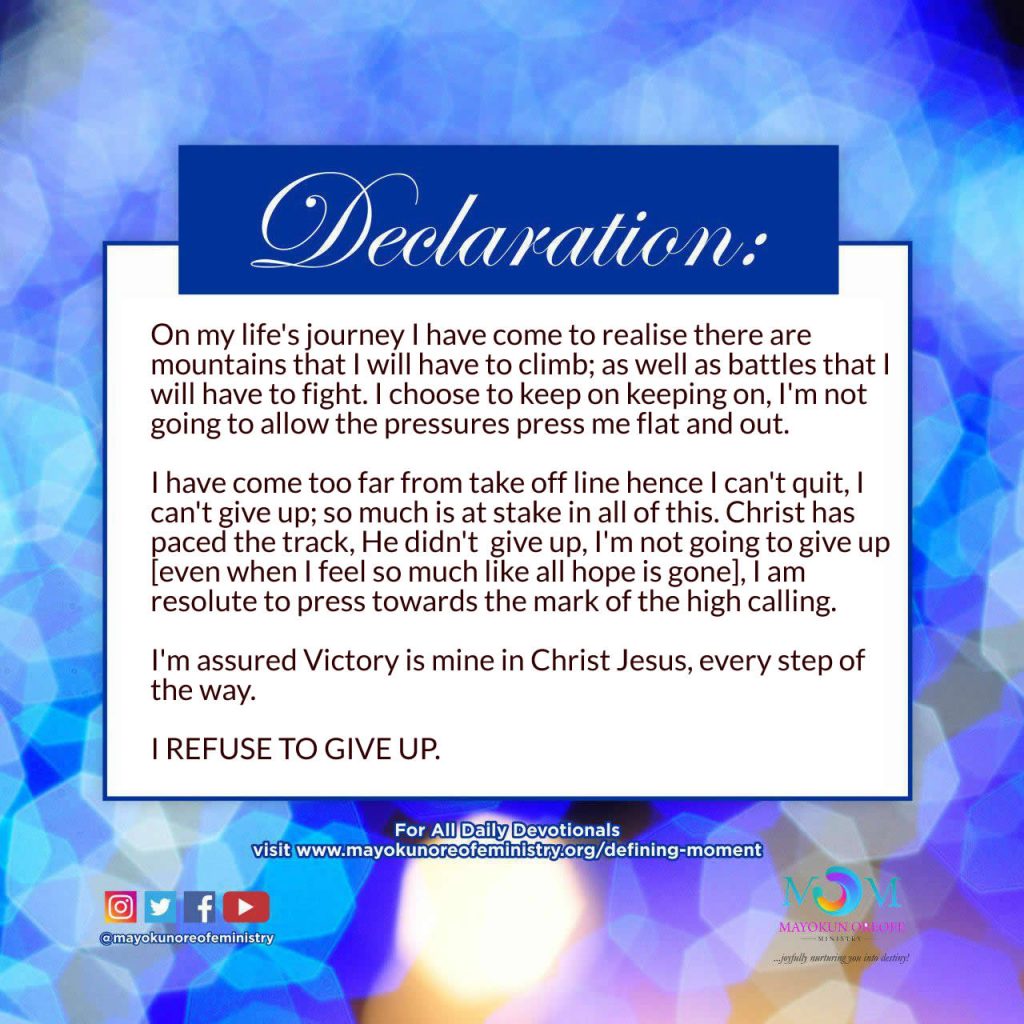