You can’t afford to stay still when the command word had been released. The Commander In Chief [God], says ENFORCE!
Naaman was a commander in the army of Syria. Through him the Lord had wrought victory for his nation, hence he became such a highly respectable man. Being a commander however did not stop leprosy from latching on him. In any facet of life where you choose to be too cool and non-enforcing, the leprosies of life will take over.

To enforce is to compel alignment with an order; it is to impose a course of action.
Matthew 11:12 says >“And from the days of John the Baptist until now, the kingdom of heaven suffers violence, and the violent take it by force.”

The violent take it by force. You can’t afford passivity when it comes to possessing what rightfully belongs to you. No excuse is good enough in the face of enforcement.

Naaman, a military personnel, knew better than to give excuses when a mention was made of a sure place of possessing his health portion of the wealth package. He swung to action immediately. He got his boss to recommend him for the appointment.
At the brink of his victory, he chose to slouch; but for the plea of the maid who encouraged him saying, ‘don’t stay still, ENFORCE!’
I can’t imagine what Naaman’s generalissimo would have amounted to on the long run, if he chose not to jump into the Jordan river, thereby enforcing his victory (healing).

Four leprous men at the city gate said to themselves in 2Kings 7:3b-4==> 3)“…“Why stay here until we die? 4)If we say, ‘We’ll go into the city’—the famine is there, and we will die. And if we stay here, we will die. So let’s go over to the camp of the Arameans and surrender. If they spare us, we live; if they kill us, then we die.””

Beloved, it is dangerous [in the face of potential victory] to stay still. Why stay still? The prophet had prophesied victory by the next day (‘next day delivery’), why won’t they get up and enforce just what the mouth of God’s servant had spoken?.

The King never thought of taking action, but the Lord laid it in the heart of lepers to damn the consequence and take a risk; hence the victory!. What they discovered triggered the eventual victory of the nation. Who knows what your enforcement will trigger in your family and erupt, even in the nation at large?

The gospel of John Chapter 5 has a very intriguing story… 3)“Here a great number of disabled people used to lie—the blind, the lame, the paralyzed. 5)One who was there had been an invalid for thirty-eight years. 6)When Jesus saw him lying there and learned that he had been in this condition for a long time, he asked him, “Do you want to get well?””
The sick man had stayed still for 38 years, never enforced the victory provided by the stirring of the pool of Bethesda. Beloved, I ask you, ‘for how long have you been watching others jump into the ‘victory pool’ as wrought by Jesus Christ at Calvary?’

Based on the length of time the man with infirmity had stayed still, making no move for his healing, yet positioned by the provision already made by God; Jesus had to ask him a question > ‘are you sure you are not just here for sight seeing? Or is it that you have accommodation challenges hence you chose to stretch out here in the last 38years’?.
Jesus couldn’t fathom how someone will allow the provision already made for him to waste away year in, year out.
He needed to know if healing was the mission of the man with infirmity by the pool. He then compelled him, [forced him to enforce] his healing.
>John 5:8-9==>8) “Then Jesus said to him, “Get up! Pick up your mat and walk.” 9)At once the man was cured; he picked up his mat and walked…”

That you lack in any particular area, or you have a need, is not enough for us to assume that you are ready for a change of story. Your desire without corresponding enforcement action, leads to nowhere. You need to rise up and take action like the man with infirmity. ‘It’s better late than never’.

As soon as the sick man jerked up, (enforced), his victory became a reality. This is the whole game plan here >>> ENFORCE! Don’t stay still any longer.

Prayer Action:
**Sing unto the Lord, worshiping Him for Who He truly is.
**Pray in the language of the Spirit for 15 minutes.
**Ask the Lord for grace to know when and how to step up your game and enforce. [Spiritual sensitivity and alertness]
**Ask Jehovah for courage such as the four leprous suddenly developed, daring what will be.
**Pray for grace never to miss target even as you rise to enforce.
**Thank God for Victory every step of the way. 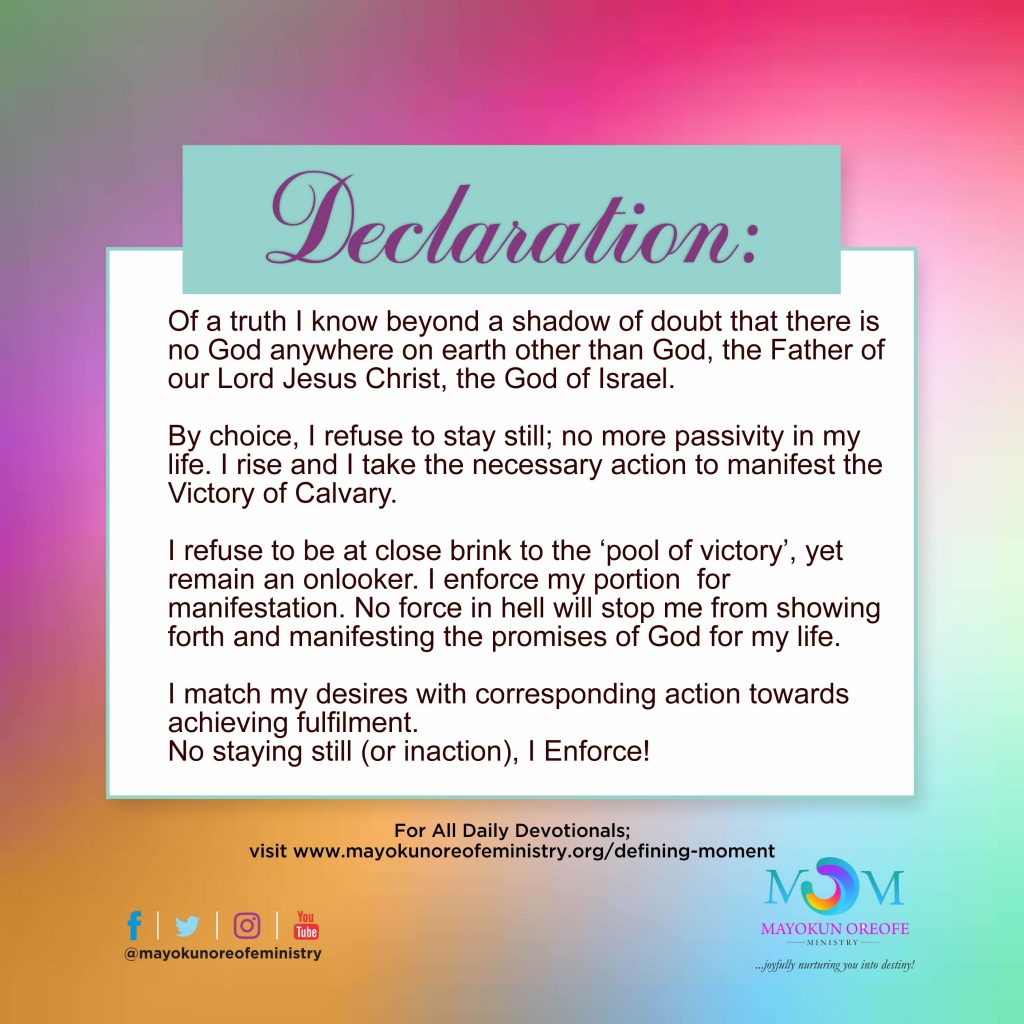