Word Study For Today: The Gospel According to Luke  Chapter 18.

Title: GOD’S GIFTS ARE NOT FOR SALE!

A Gift is simply a Gift. It is something not paid for but bestowed. A Gift is received at no cost to the endowed; meaning freely it was given and received. A Gift is given >8)Therefore He says: “When He ascended on high, He led captivity captive, And gave gifts to men.”[Ephesians 4:8 NKJV]. >And He Himself gave some to be apostles, some prophets, some evangelists, and some pastors and teachers,”[Ephesians 4:11 NKJV].

The Gifts in focus here, are God given; and are not for sale. Scriptures says >” …Freely you have received, freely give.”[Matthew 10:8 NKJV]. You paid no one for the healing gift you possess therefore you cannot deploy it at a fee from others. It was given to minister to others as a good steward. > “As each one has received a gift, minister it to one another, as good stewards of the manifold grace of God.”I Peter 4:10 NKJV.  You can’t trade God’s gift and expect that it will enhance the signs and wonders that the people see and yield to Christ. As a matter of fact, once your gift carries a sales tag, it becomes just another commodity on the shelf of life and therefore cannot be regarded as the doing of the Lord.

Meanwhile the Bible says in Matthew 5:16 (NLT)==>“In the same way, let your good deeds shine out for all to see, so that everyone will praise your heavenly Father.” What praise accrues to the Father [of the Kingdom], when you trade His gifts given to you under His manifold grace? >1 Peter 4:10-11 (NLT)==>10)“God has given each of you a gift from his great variety of spiritual gifts. Use them well to serve one another. 11)Do you have the gift of speaking? Then speak as though God himself were speaking through you. Do you have the gift of helping others? Do it with all the strength and energy that God supplies. Then everything you do will bring glory to God through Jesus Christ. All glory and power to him forever and ever! Amen.”

Deploy your gifts well without trading it nor trading with it, for it is Not For Sale. Your gift is a powerful tool to be deployed in reaching out to people as the light guiding them out of darkness into God’s unbeatable Kingdom of Light. Let not your entrepreneurial zeal/thirst/quest lead you to error like Simon in > Acts 8:18-19(NKJV)==> 18)“And when Simon saw that through the laying on of the apostles’ hands the Holy Spirit was given, he offered them money, 19)saying, “Give me this power also, that anyone on whom I lay hands may receive the Holy Spirit.”

God’s gift is never on sale and never to be bought. Peter was so furious at the thought that crossed Simon’s heart which made him to offer them money for what God had given freely for the benefit of the Kingdom. He knew obviously that his desire to have the gift was not borne out of the desire to deploy for Kingdom use, rather it’s glaringly for the sake of enriching himself and calling attention to himself. Such spirit as found in Gehazi, the servant of Elisha the prophet of old. >II Kings 5:20 (NKJV)==>“But Gehazi, the servant of Elisha the man of God, said, “Look, my master has spared Naaman this Syrian, while not receiving from his hands what he brought; but as the LORD lives, I will run after him and take something from him.”

Such error, such evil, must not be found in us. God’s Gift is Not For Sale. Putting a tag on God’s gift detaches the person from the manifold grace of God. Peter placed a curse on Simon because of his intent to buy what had been freely given(gift), > 20)But Peter said to him, “Your money perish with you, because you thought that the gift of God could be purchased with money! 21)You have neither part nor portion in this matter, for your heart is not right in the sight of God.”[Acts 8:20-21 NKJV]. Simon cut the sentence of his life >>> Perish.

Beloved may we not perish, as that is always the case with those who put their greed before and ahead of God’s will. Gehazi got his doom when he chose to trade his master’s  gift. >25)“Now he went in and stood before his master. Elisha said to him, “Where did you go, Gehazi?” And he said, “Your servant did not go anywhere.” 26)Then he said to him, “Did not my heart go with you when the man turned back from his chariot to meet you? Is it time to receive money and to receive clothing, olive groves and vineyards, sheep and oxen, male and female servants? 27)Therefore the leprosy of Naaman shall cling to you and your descendants forever.” And he went out from his presence leprous, as white as snow.”[II Kings 5:25-27 NKJV]. Such doom Gehazi fetched not only on himself but even his descendants. Be careful therefore what you do with what the Lord has given to you, worst still what He gave to others around you which you now play smart in turning around to monetise. Selah!

Beloved, beware! God’s Spiritual gift is not magic and therefore Not For Sale. Don’t become the Demetrius of this world and his likes, whose property is from magical powers. Acts 16:16 (NKJV)==>“Now it happened, as we went to prayer, that a certain slave girl possessed with a spirit of divination met us, who brought her masters much profit by fortune-telling.” >Acts 19:24-25(NKJV) ==> 24)“For a certain man named Demetrius, a silversmith, who made silver shrines of Diana, brought no small profit to the craftsmen. 25)He called them together with the workers of similar occupation, and said: “Men, you know that we have our prosperity by this trade.▪️

Beloved > “Heal the sick, cleanse the lepers, raise the dead, cast out demons. Freely you have received, freely give.”[Matthew 10:8 NKJV]. So beware and be warned, trade not with your God given gift, it is NOT FOR SALE.

-Worship the Lord in the beauty of His Holiness.

-Pray in the precious language of the Spirit for 15 minutes.

-Express your deep gratitude to God Almighty Who has freely bestowed on you Gift(s).

-Pray that the spirit of ‘Simon and Gehazi’ [that trades the gift of God] will not enter into you by any means.

-Pray that your path shall remain incorruptible. 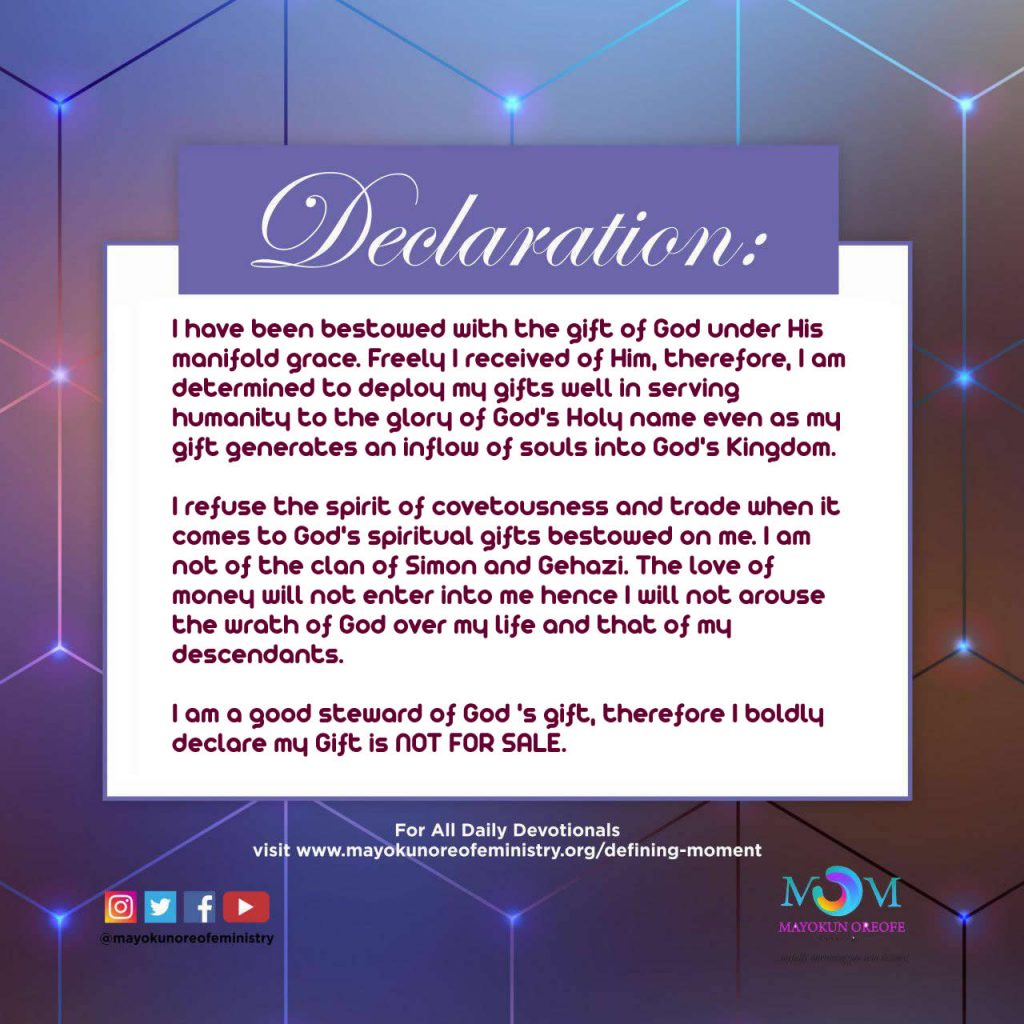