Devotion: HE IS RESTORING YOU.

To restore is to re-establish or bring back into existence. To give, or bring back that which has been lost or taken, to replace. The Sovereign Lord says He is demonstrating His glory in your life, and there shall be restoration.

Hitherto, your journey perhaps has been full of thorns and shame; denials, refusals, losses, encroachments, and all similitudes of same, to the extent that you’re beginning to settle into that unpleasant situation; don’t even think of settling there, because- here is victory for you at last!.

Remember, it’s the season of your 360 degrees rest.

In Ezekiel 39:7, the Holy One of Israel says He’s publicising and announcing Himself in your life, [revealing His glory; and making an announcement/oration of your rest >>> “Rest- oration”].

Enough of all the trampling upon; He would no longer allow anyone mess up His name in your life. Believe this beloved, because God says it will happen just as He has said.

No longer is He going to allow anyone bring shame [nor profanation] to His name in your life, not anymore. He is swinging to action; you will begin to plunder that which was plundered from you, [taking back what rightfully was yours, as apportioned/alloted to you in God].

It is expedient for you to meditate on Ezekiel 39:10 (reading from diverse translations of scripture); as this will sync in the reality of what God is set to do in your life.

12)To make known to the children of men his mighty acts, and the glorious splendour of his kingdom.”

This is so good. God is displaying His splendour and His wondrous works in your life because you are a part of His Kingdom. Of a truth, rest roundabout is your portion. Strange acts will begin to happen.

He is making of you / your life, a wonder!

> Exodus 34:10 -11(ESV) says ==> 10)“And he said, “Behold, I am making a covenant. Before all your people I will do marvels, such as have not been created in all the earth or in any nation. And all the people among whom you are shall see the work of the Lord, for it is an awesome thing that I will do with you. 11)”Observe what I command you this day. Behold, I will drive out before you the Amorites, the Canaanites, the Hittites, the Perizzites, the Hivites, and the Jebusites.”

Watch this- whatever represents Amorites and all the “ites” (heights), the Lord shall move in against them. His glory will blindfold them,  and He’d take back territories taken from you, (promises encroached); you will enter into your rest.

Everyone will marvel at your dazzle.

Praise The Name Of The Lord!

-Worship Messiah the Lord of Rest and Restoration.

-Thank the Lord for His glory, and ask that He manifests His glory in your life, even as He is determined to do.

-Pray fervently that the glorious God will regain grounds for you, (lost territories be taken back, promises delayed come to fruition etc). Pray restoration.

-Ask that the Lord work a work in your life such as you have never experienced before, (mention areas of attention on your mind, for His glorious intervention). 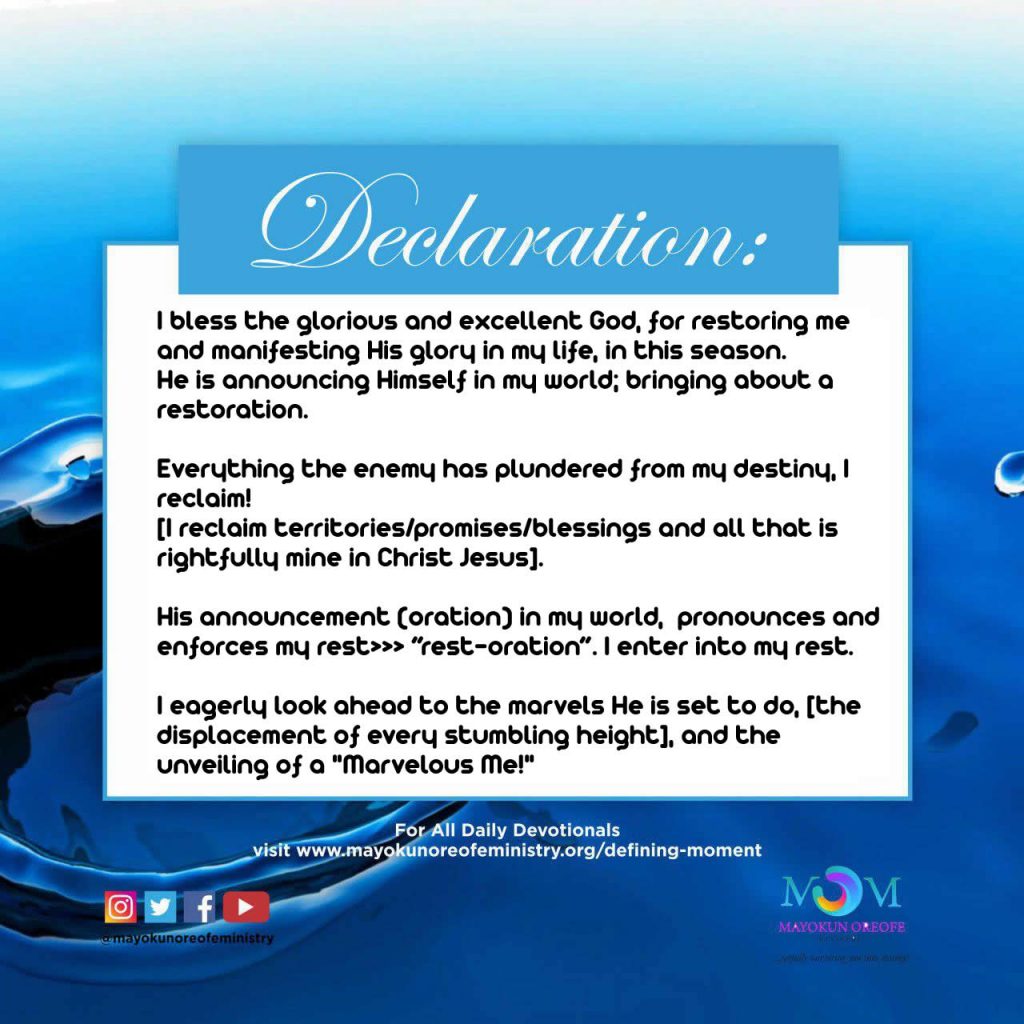