Devotion: HEAR WELL: HEAR THE WORD OF THE LORD.

The anarchy, chaos, misdirection and all manner of moral degeneration that the world would have been experiencing, could have been terribly alarming compared to what’s already in existence, had God’s Word not been around, it would have been unimaginable; because everyone would have done things as they deemed fit and okay.

Even with message after message being churned out on a daily basis the world over, still the world is daily decaying and gradually going on a downward spiral.

To hear the Word of God therefore, is one of the most expedient things under heaven. We cannot afford to scorn (ignore, neglect, despise) God’s Word.

God is seeking those whose ears will be opened to His Word and whose hearts will take same in without fail. >Jeremiah 6:10 (NLT)==>“To whom can I give warning? Who will listen when I speak? Their ears are closed, and they cannot hear. They scorn the word of the Lord. They don’t want to listen at all.”

God delights in speaking, He loves to be engaged in conversation. It’s His absolute delight. The Bible talks about Him delighting in every detail of our lives. He loves being involved, and speaking is one of His instruments.

It would be stating the obvious to say that God speaks always; He speaks in diverse ways all the time, just so that all can hear His Word. It is very crucial for all to Hear His Word. >“14)For God speaks again and again, though people do not recognize it. 15)He speaks in dreams, in visions of the night, when deep sleep falls on people as they lie in their beds.”[Job 33:14-15NLT]. >“For God may speak in one way, or in another, Yet man does not perceive it.” [Job 33:14 NKJV].

Repeatedly God speaks, not for want of what to do, but because He is Master of all, Creator of everything, no one knows His depth, but His Word reveals it. Hearing His Word therefore will give exposition, direction and yet much more. >“Your ears shall hear a word behind you, saying, “This is the way, walk in it,” Whenever you turn to the right hand Or whenever you turn to the left.”[Isaiah 30:21NKJV].

What a beauty of His Word! >>> knowing what to do, how to do it, when to do it and even where to do what’s to be done.

Looking for direction in life? Trying to navigate your path and lost for where to begin- God’s Word is your dependable source. With it, you can never go wrong or miss your way.

Extremely expository and directional is God’s Word. No wonder God abhors those who trivialise His Word and turn away from hearing it. He in turn detest their words as they express it, hence turning their prayer (conversation with Him) to a monologue as against a dialogue. >Proverbs 28:9 (NKJV) says ==>“One who turns away his ear from hearing the law, Even his prayer is an abomination.” God forbid! May our prayers not become irritating to Him.

Hearing God’s Word will cause haters and mockers who taunt, waiting to see what becomes of you, to be ashamed…For God would have spoken; leading in the right direction, exposing No-Go Zones, instructing on what to do, hence you cannot but be a contradiction to the detractor’s expectation. Glory to Jesus! Halleluyah!

Beloved, tremble therefore at the Word of God, living eager to hear His Word daily. >“Hear the word of the LORD, You who tremble at His word: “Your brethren who hated you, Who cast you out for My name’s sake, said, ‘Let the LORD be glorified, That we may see your joy.’ But they shall be ashamed.”[Isaiah 66:5NKJV]. Folly is heard in the mouth of those who scorn God’s Word, giving no regard to it. From those who delight and embrace God’s Word would you awake to hear seasoned words that no tongue can gainsay. The Lord God causes them to hear His Word with unusual understanding (just as the learned); and as they hear they speak [mysteries that stand them out especially in a lost world where the Word of God is toyed with, hence unappreciated].

>“The Lord GOD has given Me The tongue of the learned, That I should know how to speak A word in season to him who is weary. He awakens Me morning by morning, He awakens My ear To hear as the learned.”[Isaiah50:4 NKJV].

Everything that God created is mandated to Hear His Word.

>“Stand in the gate of the LORD’s house, and proclaim there this word, and say, ‘Hear the word of the LORD, all you of Judah who enter in at these gates to worship the LORD!’ ”[Jeremiah 7:2 NKJV]. Judah was instructed to Hear His Word.

>“Son of man, I have made you a watchman for the house of Israel; therefore hear a word from My mouth, and give them warning from Me:”[Ezekiel 3:17NKJV]. Watchman (even on your kneels HEAR THE WORD OF THE LORD.

>“‘Therefore, you shepherds, hear the word of the LORD:”[Ezekiel 34:7NKJV]. You can’t take lead successfully without hearing His Word. Shepherds of God’s folk HEAR YE HIS WORD.

Kings ruling the kingdoms of this world, HEAR YE HIS WORD. >>> >“Yet hear the word of the LORD, O Zedekiah king of Judah! Thus says the LORD concerning you: ‘You shall not die by the sword.”

[Jeremiah 34:4 NKJV]. >“and say, ‘Hear the word of the LORD, O king of Judah, you who sit on the throne of David, you and your servants and your people who enter these gates!”[Jeremiah 22:2NKJV]. To rule His world according to His Will, His Word must be heard.

God’s Word is all encompassing, it addresses all classes of people, cutting across different climes and culture. An apt Word for each one in season. The remnant, the captive, the harlot, all have His Word to hear. >Jeremiah 42:15 (NKJV) says==>“Then hear now the word of the LORD, O remnant of Judah! Thus says the LORD of hosts, the God of Israel: ‘If you wholly set your faces to enter Egypt, and go to dwell there,”.

>“Therefore hear the word of the LORD, all you of the captivity, whom I have sent from Jerusalem to Babylon.”[Jeremiah 29:20NKJV].

Beloved, so critical is the subject of Hearing the Word of God. The city is to Hear His Word, even earth that contains all, is compelled to Hear God’s Word. >“On the next Sabbath almost the whole city came together to hear the word of God.”[Acts 13:44 NKJV]. >“O earth, earth, earth, Hear the word of the LORD!”[Jeremiah 22:29NKJV].

Wow! Serious! His Word is of essence if all creation must Hear it. >…“It was necessary that the word of God should be spoken to you first; but since you reject it, and judge yourselves unworthy of everlasting life, behold, we turn to the Gentiles.”[Acts 13:46b NKJV].

It is for your own good and to your advantage that you hear the Word of the Lord.

Don’t reject the Word of God… Hear it as spoken, that you may not pay dearly for your choice otherwise.

Hearing God’s Word will birth in you- Faith! The more of His Word You Hear, the more strongly your trust, your belief, your confidence , your buy-in et al becomes. Faith grows in you when you keep at hearing God’s Word. >“So then faith comes by hearing, and hearing by the word of God.”[Romans 10:17 NKJV].

Fear is paralysing and though it is borne also by hearing [but hearing the word from the other camp (wherein there is no light). What can a dark word do in your life? It will cause a perpetual groping.[Flee from it].

It’s golden to take heed to this word >“Hear the word which the LORD speaks to you, O house of Israel.”[Jeremiah 10:1 NKJV]… Beloved, HEAR THE WORD OF THE LORD!

-Worship solemnly the Lord of Words.

-Pray in the Holy Ghost.

-Ask that the Lord will cause you to hear daily as He speaks; anointing your ears to hear as the ear of the learned.

-Pray that according to His Word, you will hear behind you, the directional voice of His Word, leading you in the way to go. 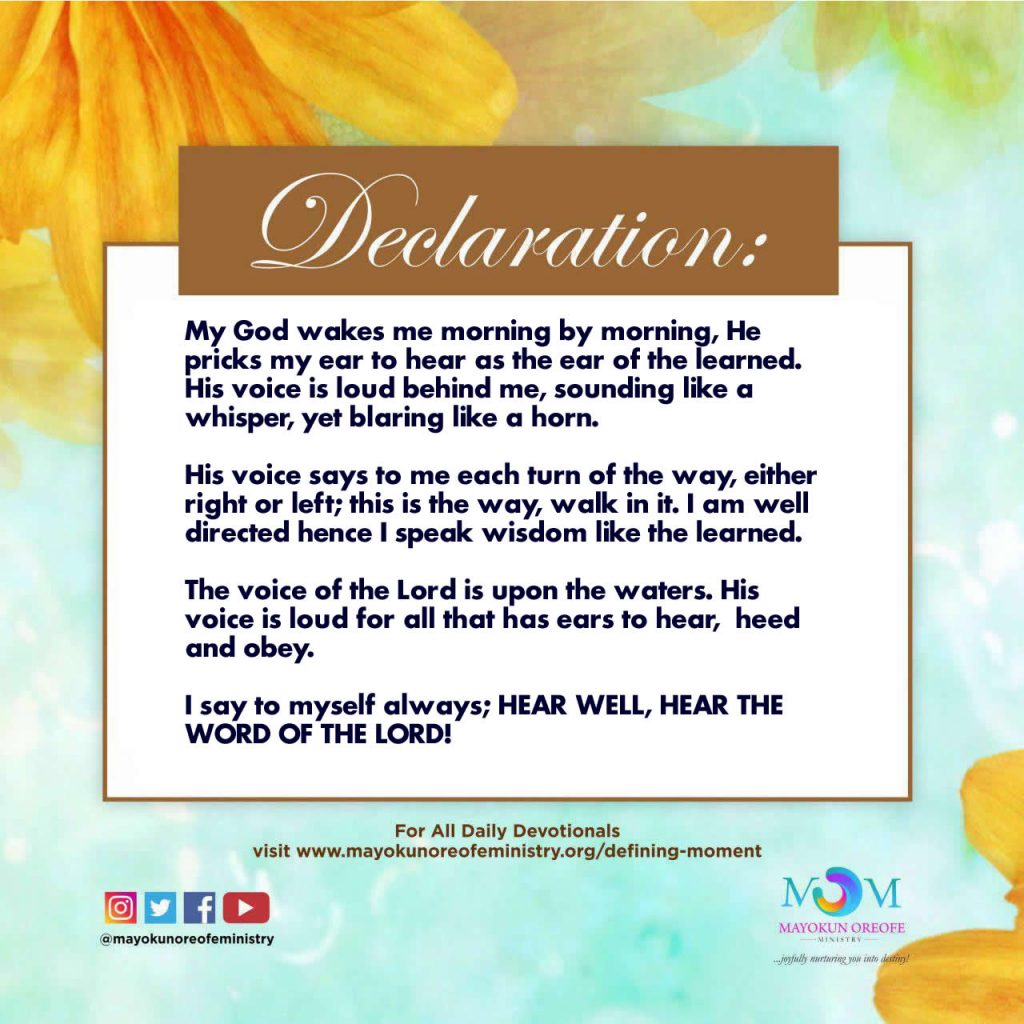