Word Study for Today: The Book of Psalm Chapter 85

Taunt, Scorn, Scoff, Reproach, Disgrace and the likes, are words that describe Peninnah’s action against Hannah. To taunt is to provoke in a sarcastic/insulting manner.  To scoff and scorn is to be cynical, disrespectful, and mocking. There are persons in life who for whatever reason (justifiable or otherwise), pitch their tent against you in the position that Peninnah took against Hannah.

It’s totally uncomely for a woman to taunt and mock another woman who does not have a child. Childbearing is not man made, it’s God graced… if it now appears that grace isn’t yet speaking for one in that area; should taunting, scoffing and it’s likes be the disposition of any right-thinking person?

No one enjoys ridicule in whatever form, hence Hannah would breakdown at the scoffing and scorning drama episodes that took place in their house each time. It tore at Hannah’s heart; It was bad enough she didn’t have a child she could call her very own, but why should anyone help her rub it in, the more by such taunting as Peninnah would churn at her. Isn’t that what happens when reproach suddenly hijacks the steering of one’s life? Haven’t seen or heard of anyone who threw a party when his or her enemy mocked or reproached her.

Nehemiah, a man on a godly rescue mission, couldn’t have imagined that such mission will attract the taunt of the very people on whose account his own heart was on fire. >“But when Sanballat the Horonite and Tobiah the Ammonite official heard of my arrival, they were very displeased that someone had come to help the people of Israel.”[Nehemiah 2:10 NLT]▪️

How can you be displeased at help? > Nehemiah 2:19 (NLT) says ==> when Sanballat, Tobiah, and Geshem the Arab heard of our plan, they scoffed contemptuously. “What are you doing? Are you rebelling against the king?” they asked.”▪️Nehemiah 4:1-3 ;7-8(NLT==>1)“Sanballat was very angry when he learned that we were rebuilding the wall. He flew into a rage and mocked the Jews, 2)saying in front of his friends and the Samarian army officers, “What does this bunch of poor, feeble Jews think they’re doing? Do they think they can build the wall in a single day by just offering a few sacrifices? Do they actually think they can make something of stones from a rubbish heap—and charred ones at that?” 3)Tobiah the Ammonite, who was standing beside him, remarked, “That stone wall would collapse if even a fox walked along the top of it!” 7)“But when Sanballat and Tobiah and the Arabs, Ammonites, and Ashdodites heard that the work was going ahead and that the gaps in the wall of Jerusalem were being repaired, they were furious. 8)They all made plans to come and fight against Jerusalem and throw us into confusion.”▪️

Hannah would probably never have had a child in her life despite the love her husband showered on her; Nehemiah would never have carried out his rebuilding mission, if they both did not pull up courage as to ignore their “Peninnah”.

To ignore is to brush-off, to refrain from noticing or recognizing. Ignoring such level of pain and grief as taunting can cost a man, it’s not something you can merely do. Hence, anyone who truly will victoriously ignore the “Peninnah” of life, will have to commit to something stronger such as David, Hannah, and Nehemiah committed to. The three of them as and when occasion demanded of them, had to turn their eyes on God in the place of prayer. To ignore one thing, you must commit your attention to another. Prayer was the weapon of victory for Hannah and the others.

>1 Samuel 1:9-10 (NLT)==>“Once after a sacrificial meal at Shiloh, Hannah got up and went to pray. Eli the priest was sitting at his customary place beside the entrance of the Tabernacle. Hannah was in deep anguish, crying bitterly as she prayed to the Lord.”▪️

Are you being scorned, scoffed or taunted by anyone? IGNORE “PENINNAH”, and commit to Prayer. Nehemiah said >4)“Then I prayed, “Hear us, our God, for we are being mocked. May their scoffing fall back on their own heads, and may they themselves become captives in a foreign land!” 9)“But we prayed to our God and guarded the city day and night to protect ourselves.” [Nehemiah 4:4,9 NLT]▪️

David wrote >“My enemies taunt me day after day. They mock and curse me.”[Psalms 102:8 NLT]▪️>“Their taunts break my bones. They scoff, “Where is this God of yours?””[Psalms 42:10 NLT]▪️>“But I keep praying to you, Lord, hoping this time you will show me favor. In your unfailing love, O God, answer my prayer with your sure salvation.”[Psalms 69:13NLT]▪️

Victory is always the end result if you will brace up to IGNORE “PENINNAH”. God will frustrate the scorner and scoffer >“When our enemies heard that we knew of their plans and that God had frustrated them, we all returned to our work on the wall.”[Nehemiah 4:15 NLT]▪️

David concluded and said > “It is good for me that I have been afflicted, That I may learn Your statutes.”[Psalms 119:71 NKJV]▪️No matter what the “Peninnah” have caused and cost you, if you ignore and turn your attention on Jesus, you will always be the better off.

As for Hannah, she rose from her place of prayer after encountering the God of Shiloh, and >The entire family got up early the next morning and went to worship the Lord once more. Then they returned home to Ramah. When Elkanah slept with Hannah, the Lord remembered her plea, 20)and in due time she gave birth to a son. She named him Samuel, for she said, “I asked the Lord for him.””[1 Samuel 1:19-20 NLT].▪️

Your Samuel will come; Your Victory is guaranteed when you IGNORE “PENINNAH”.

**Lift up your voice in praise to God.

**Speak in the Holy language of heaven for 15minutes.

**Ask Jehovah to give you the boldness to IGNORE every representation or presentation of Peninnah in your life now. To teach you BEST PRACTICE as is fit for your life, [grace to take your heart and attention away from distractions and detractors].

**Receive grace to turn to God in prayer, as against giving attention to “Peninnah”.

**Ask the Lord to remember you as He did Hannah, [giving you victory over the strength of the taunting and scoffing].

Victory is guaranteed when you IGNORE “PENINNAH” 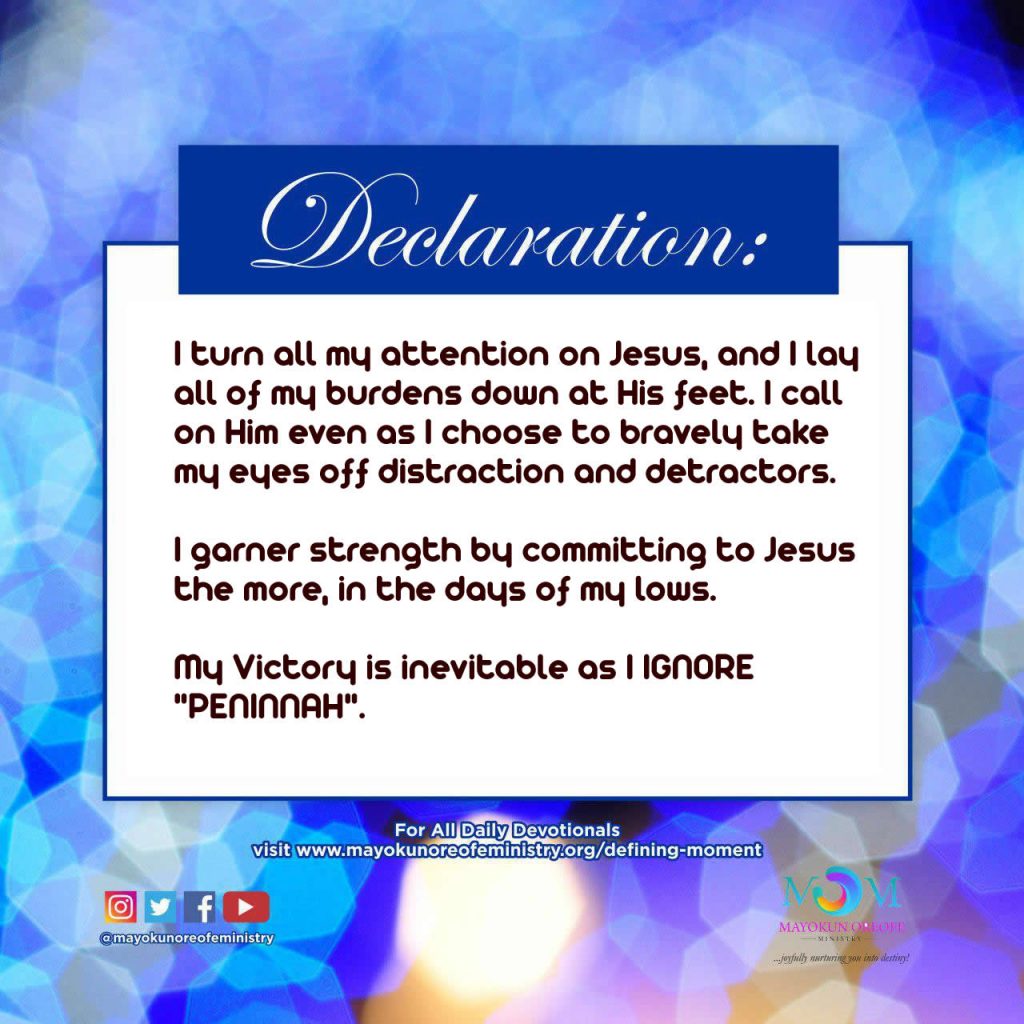