Word Study For Today: The Book of Psalms Chapter 24

Today, the world is in dare need of intercession, by Intercessors. God is such a structured God, Who of course based on His knowledge of creation and the tendencies of His created (humanity), had gone ahead to make provisions for all that will ever arise in contradiction to His precepts and plans. God knew things will somewhat go wrong at some point, hence He made provision for reconciliation to and restoration of original intent; by orchestrating the office or role of an Intercessor. God particularly knew that, the one in the ditch or who is ditch bound, is not likely to be able to save himself, hence He created the role of another who is seemingly standing to “stand in gap”[intercede].

Ezekiel 22:30(NKJV)==> “So I sought for a man among them who would make a wall, and stand in the gap before Me on behalf of the land, that I should not destroy it; but I found no one.”

Intercession is to act or interpose in behalf of someone in difficulty or trouble, as by pleading or petition. It is to attempt to reconcile differences between two people or groups i.e mediate.

How do you explain it? God saw the foolishness of His beloved nation Israel, no sooner than they left Egypt, they forgot the invisible God that brought them out… they began to seek a representation for the God who already said to them “no one sees my face and lives”. They asked for a molten image and Aaron granted them. God became furious and was bent on wiping them out but then Moses stood in the gap[pleading with many words of reminder, to God; asking Him to spare His people for the sake of His Holy name]. God heeded. Only in a short while thereafter, Moses, stepped down from the mountain and He saw physically what God had seen[the stupor of the Israelites, and he as flesh, became enraged…to the intent he slammed the tablets of law  he had laboured  for 40 days and nights to get directly written in God’s handwriting. Why would this happen to someone who had the audacity, the courage and grace to turn the wrath of God only a while ago? Simple, Moses had his own back uncovered whilst he had that of the children of Israel covered. Aaron his priest had “minded the gap” by medlling in the overbearing demand of the children of Israel[building a molten image]; he failed to “stand in the gap” for Moses. Shame!!!

Vashti had no Intercessor when she goofed. Memukan became a minder of the gap instead of standing in gap for her, little wonder she lost her seat of royalty. Esther had all the Jews of Susa and all her maids intercede for her.

>Esther 4:15-16 (NLT)==>15)“Then Esther sent this reply to Mordecai: “Go and gather together all the Jews of Susa and fast for me. Do not eat or drink for three days, night or day. My maids and I will do the same. And then, though it is against the law, I will go in to see the king. If I must die, I must die.””

Esther not only did not die, she never lost her royalty. She covered the backs of the Jews and turned the legislation of annihilation of the Jews against the enemy of the Jews. Whilst she covered their backs by standing in the gap for them before Ahasuerus the king, they had her back covered too, hence the victory.

In Acts 5:34-40 (NLT)==>34)“But one member, a Pharisee named Gamaliel, who was an expert in religious law and respected by all the people, stood up and ordered that the men be sent outside the council chamber for a while. 35)Then he said to his colleagues, “Men of Israel, take care what you are planning to do to these men! 36)Some time ago there was that fellow Theudas, who pretended to be someone great. About 400 others joined him, but he was killed, and all his followers went their various ways. The whole movement came to nothing. 37)After him, at the time of the census, there was Judas of Galilee. He got people to follow him, but he was killed, too, and all his followers were scattered. 38)“So my advice is, leave these men alone. Let them go. If they are planning and doing these things merely on their own, it will soon be overthrown. 39)But if it is from God, you will not be able to overthrow them. You may even find yourselves fighting against God!” 40)The others accepted his advice. They called in the apostles and had them flogged. Then they ordered them never again to speak in the name of Jesus, and they let them go.”

Gamaliel a Pharisee, stood in the gap for the apostles[made a case for them because he carried weight in the council], and the apostles were spared from the intended doom. You carry much more weight with God.

ARE YOU MINDING SOMEONE’S GAP OR ARE YOU STANDING IN GAP FOR SOMEONE? ARE YOU A GAMALIEL OR A MEMUKAN?

Is your back covered or exposed? IT’S TIME FOR INTERCESSION!!!

**Give thanks to the Lord God Almighty as you sing in His Presence.
**Pray in the Holy Ghost for 15 minutes.
**Ask the Lord for the grace of intercession and supplication[the ability to carry other people’s burdens into the place of prayer].
**Pray that the Lord awaken your Gamaliel so he can speak up in your favour for victory.
**Rebuke and cast out every Memukan of life who has made it duty the bound to “ mind your gap”[majoring in opening up your man and emphasizing on your weaknesses/pitfalls/ errors].
**Go ahead now trigger your intercessory grace, “stand in gap” for some now. 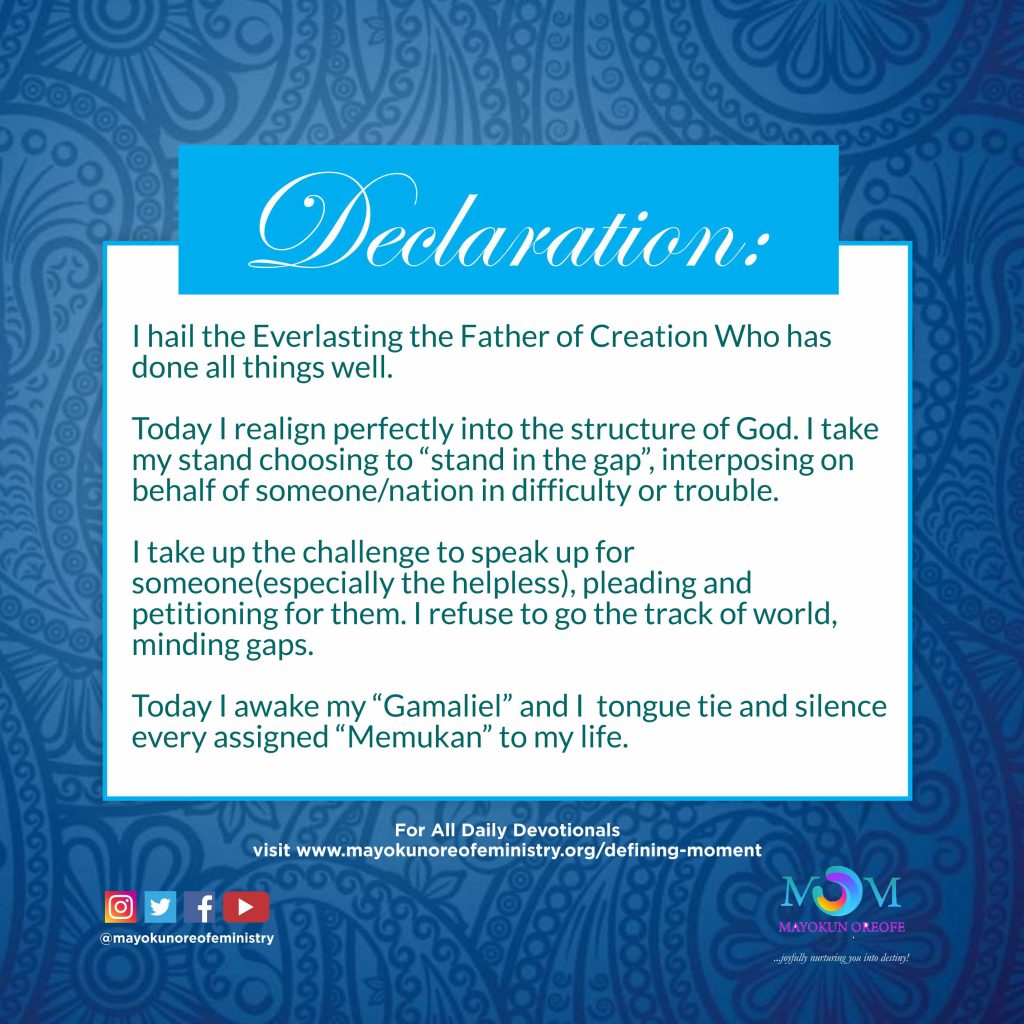