Word Study For Today: The Book of Psalm Chapter 148.

Devotion: IT’S ALL WORKING TOGETHER FOR MY GOOD.

For those who are committed to God, those who have signed up to loving Him unashamedly, withholding nothing from Him; He also has unreservedly committed to ensuring that all things work together for good, for them.

God is not a man. His purpose is supreme [ultimate, sovereign, utmost, surpassing]. There is none who can successfully oppose Him.

Satan is of course foolish enough to attempt thwarting God’s plans by introducing his counterfeit plans in the lives of people. But the beauty of our race as God’s own beloved, is the truth found in Romans 8:28b …all things work together for good to those who love God, to those who are the called according to His purpose.

“All things” including the pranks of satan, God takes it all as raw materials, as means, as avenues, He adds it up to His own plans and processes, and fabricates it all to work in favour and for the good of those who are committed to God, those who love Him (as to fear Him and obey His commandments; those who do His will, whether convenient or not, those living sacrificially just to please Him).

When the children of Israel (His beloved, His covenant buddies), were faced with what looked like an insurmountable challenge, (having three terrible nations turn up against them in battle, God their God, worked it out for their good and in their favour. God introduced a strategy of praise into the stratagem of the enemy.  He worked it out at the end of the day such that the warring nations turned against themselves, helping to destroy one another.

His beloved Israel did not need to lift a finger, the battle was taken away from them, it became the Lord’s battle and victory automatically became theirs.

>II Chronicles 20:25 NKJV)==>“When Jehoshaphat and his people came to take away their spoil, they found among them an abundance of valuables on the dead bodies, and precious jewelry, which they stripped off for themselves, more than they could carry away; and they were three days gathering the spoil because there was so much.”

Just as the Lord came through for His covenant buddies (Israel), because they handed over their battle into the Lord’s hands; it’s the same way He is taking over your battles, routing your enemies, making a minced meat of them, and ultimately causing all things to work together for your good and His glory. Halleluyah!

•Thank the God Who called you according to His purpose.

•Pray in the Holy Spirit for 15 minutes (building your most holy faith).

•Express and reaffirm truthfully your love for God. Ask for grace to grow much more in love with  Him.

•Pray that all God has purposed for your life shall work out at all costs, not minding the tricks of the enemy to stall it.

•Ask the Lord to turn the battle against the enemy, (mention if any, areas the enemy is challenging you now). Pray that the Lord works it out for your victory and in your favour. 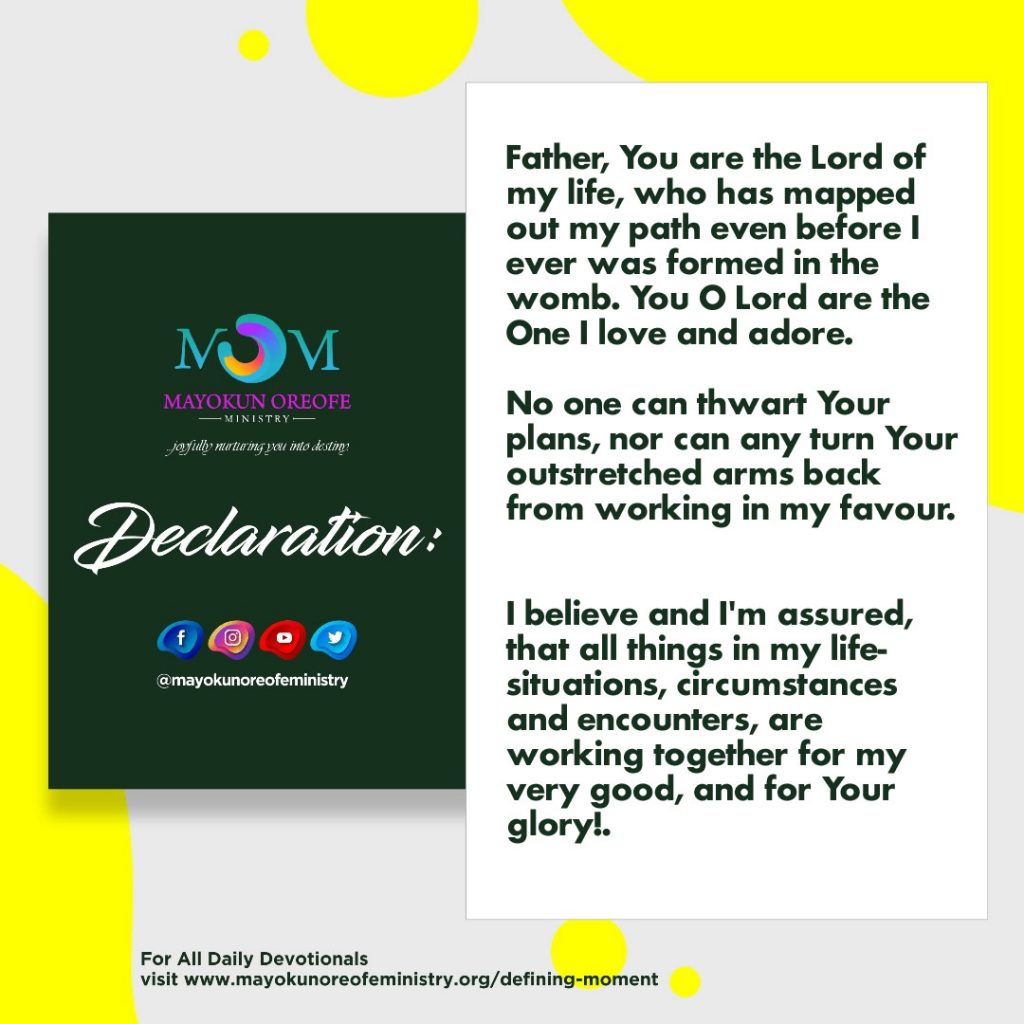