Faith is a trust or confidence in the intentions or abilities of a person. It is the HAND that takes from God.

To please, is to give pleasure and be agreeable; to act in satisfaction.

Going by this definition therefore, >Hebrews 11:6 (GNB) which says >“No one can please God without faith, for whoever comes to God must have faith that God exists and rewards those who seek him”; simply means that, Faith is what gives God pleasure and satisfaction, so much so that He is encouraged/moved to action. Faith is an indication of your agreement to the ability of God, hence; that moves/encourages Him to perform in accordance to what He is able to or has promised to do, which you profess to agree with.

Faith requires some level of building and equipping which only the Word of God can do. Constant feeding on the Word therefore, is necessary to build faith, in order to take delivery of our desires.

Doubt is an enemy of faith. It is limiting, and it can readily cut off the current of faith.

Lack or absence of Faith therefore is being disagreeable to the ability/plan/purpose/promise of God. Without your Faith in place, you are saying to God “I don’t believe You can do what I’m asking for, or that which God’s ability can do, or what He has planned/purposed/promised to do. Selah!

Therefore, make it a daily habit to feed your faith and starve your doubts.

Looking through scriptures, it’s evident the things that wouldn’t have happened without an expression of Faith, and of course the things that never happened simply because Faith was absent. >“Because they did not have faith, he did not perform many miracles there.”[Matthew 13:58 GNB].

Where Faith is absent or lacking, miracles won’t happen. In Luke 7:9(TPT) it’s written that ==>9)Jesus marveled at this. He turned around and said to the crowd who had followed him, “Listen, everyone! Never have I found even one among the people of God a man like this who believes so strongly in me.” 10)Jesus then spoke the healing word from a distance.

Imagine Jesus said, I haven’t seen Faith like this in any of the people of God who has Faith in me like this centurion. Implication of that is, not even amongst the disciples was there such believe in Jesus and His ability to do the miraculous. Oh, God truly means business when His Word says Without Faith, it’s impossible to please Him [get Him to move and do what He is able to do or promised to do in your situation].

Faith is essential, Faith is crucial, else you “deactivate” the ability of God to move in your matter, when faith is lacking.

>Mark 9:23 (TPT)==>“Jesus said to him, “What do you mean ‘if’? If you are able to believe, all things are possible to the believer.” All together saying, “Once you have Faith, all things are possible with Faith… So the events of your life aren’t dependent on probabilities [“if”]; rather on Faith! It happens for you as you believe He can do. Hebrews 11:6b(MSG) says ==>“…anyone who wants to approach God must believe both that he exists and that he cares enough to respond to those who seek him.” He truly cares to respond to you; however, it is your Faith that gives Him satisfaction as to want to just do what you seek of and from Him.

Hebrews 11:2b(MSG) says ==>“…The act of faith is what distinguished our ancestors, set them above the crowd.”

Our spiritual progenitors [like Enoch, Abraham, Noah etc] would never have been distinguished if they had no Faith. Their exhibition of Faith (belief in the ability of God), was pleasure to God, hence He distinguished them [to date, we read of their life’s exploits]. Beloved, nothing happens in your favour, WITHOUT FAITH.

Faith is the code to getting God’s attention to act. God goes all out  to move in mysterious ways once He sees Faith. >John 2:3-5, 8-11(AMP)==>3)“When the wine was all gone, the mother of Jesus said to Him, “ They have no more wine.” 4)Jesus said to her, “[Dear] woman, what is that to you and to Me? My time [to act and to be revealed] has not yet come.” 5)His mother said to the servants, “Whatever He says to you, do it.” 8)Then He said to them, “Draw some out now and take it to the headwaiter [of the banquet].” So they took it to him. 9)And when the headwaiter tasted the water which had turned into wine, not knowing where it came from (though the servants who had drawn the water knew) he called the bridegroom, 10)and said to him, “Everyone else serves his best wine first, and when people have drunk freely, then he serves that which is not so good; but you have kept back the good wine until now.” 11)This, the first of His signs (attesting miracles), Jesus did in Cana of Galilee, and revealed His glory [displaying His deity and His great power openly], and His disciples believed [confidently] in Him [as the Messiah–they adhered to, trusted in, and relied on Him].”

By Mary’s Faith, she provoked her Son to action. A miracle occurred because Mary was agreeable to the supernatural abilities of Jesus Christ her Son, which no one else knew about at that time. Jesus Himself said His time of showing forth had not come, yet He was pleased at the level of His Mother’s Faith in His ability, hence in the twinkle of an eye, He switched and did the miracle never done before. Faith provokes action; but WITHOUT FAITH, no action, and status remains same or decays.

To analyse the effect or the part Faith played in the lives of the listed generalissimos in Hebrews 11, pages will be written; but suffice here to mention just Enoch and Noah. >Hebrews 11:5(AMP)==>“By faith [that pleased God] Enoch was caught up and taken to heaven so that he would not have a glimpse of death; AND HE WAS NOT FOUND, BECAUSE GOD HAD TAKEN HIM; for even before he was taken [to heaven], he received the testimony [still on record] that he had walked with God and pleased Him.” Enoch’s Faith Pleased God.

>Hebrews 11:7 (AMP)==>“By faith [with confidence in God and His word] Noah, being warned by God about events not yet seen, in reverence prepared an ark for the salvation of his family. By this [act of obedience] he condemned the world and became an heir of the righteousness which comes by faith.” Himself and his family would have perished alongside a host of others during the flood, WITHOUT FAITH.

Selah! >>>All others in that hall of fame in Hebrews 11, would never have made it there, had they been lacking in faith.

-Pray in the Spiritual language of the One in Who you believe.

-Ask the Lord for Pleasing Faith like that of Enoch [pray fervently].

-Pray that familiarity like that of those in Nazareth (Jesus’ home town) will not catch up with you, causing you to displease Him. 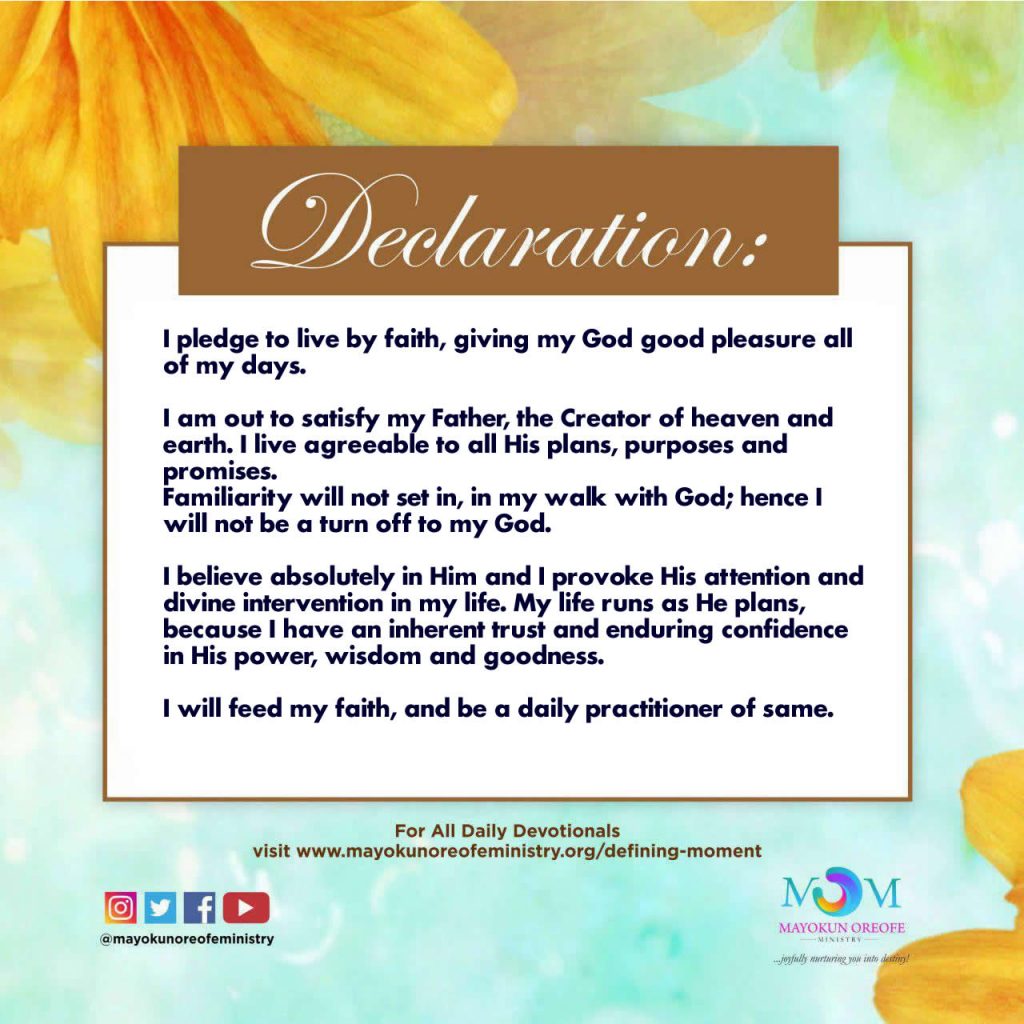