Word Study For Today: The Book of Psalm Chapter 28

Angels are servants sent on divine missions by God. They are ministering spirits sent to man, to minister to them, to take charge and ensure safety.

>Hebrews 1:14(NKJV)==>“Are they not all ministering spirits sent forth to minister for those who will inherit salvation?”

God is still in the business of assigning His angels to work on this side of eternity, carrying out dutifully, errands as God would have them deliver to humanity.

Angels will bear you up so you don’t bump your feet. They are assigned to ensure you are preserved in your going and in coming; in your laying down and in your rising. Angels are your spiritual security guards.

>Psalms 34:7(NKJV)==>“The angel of the LORD encamps all around those who fear Him, And delivers them.”

These ministering spirits encamp (surround, mount guard) round about those who have found a dwelling in God. They are at alert with the urgent instruction from the throne of grace to deliver them from every form of trouble. You need to be conscious of the fact that you are surrounded by these ministers hence never alone.

>2 Kings 6:16-17(NLT)==>16)“Don’t be afraid!” Elisha told him. “For there are more on our side than on theirs!” 17)Then Elisha prayed, “O Lord, open his eyes and let him see!” The Lord opened the young man’s eyes, and when he looked up, he saw that the hillside around Elisha was filled with horses and chariots of fire.”

Elisha had to ask God to open the eyes of his servant who was totally unaware of the deployment of heaven towards them on their mission. When you lack the consciousness of your divine body guards, then you fret unnecessarily especially in the face of seeming trouble. Elisha’s disposition was that of calmness because he knew he wasn’t alone.

The three Hebrew boys [Shadrach, Meshach and Abednego], knew they were not alone so boldly they could face the challenge posed against their lives.

His angels carry out His plans to the ‘letter’, they excel in every detail He instructs them. Of themselves they do nothing, but as they hear, they give heed. They are not slack in their deliverables, for the Kings’s command is urgent. They don’t toy around you nor with you.

Daniel found himself in the midst of lions in their den (territory); but because his life was precious, angels assigned to him couldn’t afford to toy with him… see his testament in >Daniel 6:22(NLT)==>“My God sent his angel to shut the lions’ mouths so that they would not hurt me, for I have been found innocent in his sight. And I have not wronged you, Your Majesty.””

Unto the apostles their assigned angel opened the prison door.

Angels are emissaries of good news.

>Daniel 10:10-11(NKJV)==>10)“Suddenly, a hand touched me, which made me tremble on my knees and on the palms of my hands. 11)And he said to me, “O Daniel, man greatly beloved, understand the words that I speak to you, and stand upright, for I have now been sent to you.” While he was speaking this word to me, I stood trembling.”

Are you the beloved of the Lord? You have your assigned angel(s). Be conscious and watch out for the ministry of these angels all around you. You are not alone. Fear not, your spiritual emissaries are all over. You will not be stranded. You shall suffer no loss.

>Hebrews 12:22(NKJV)==>“But you have come to Mount Zion and to the city of the living God, the heavenly Jerusalem, to an innumerable company of angels,”

WELCOME TO THE INNUMERABLE COMPANY OF ANGELS.

Prayer Action:
**Worship the Lord Whose beloved you are.
**Pray for 15minutes in the language of heaven (even your angel understands it).
**Thank God for the provision He has made in the host of angels at your beck and call.
**Activate the activity of your angel(s), [pray that they begin to work like never before in and on your behalf].
**Deploy them now in specific areas of your life you want intervention. 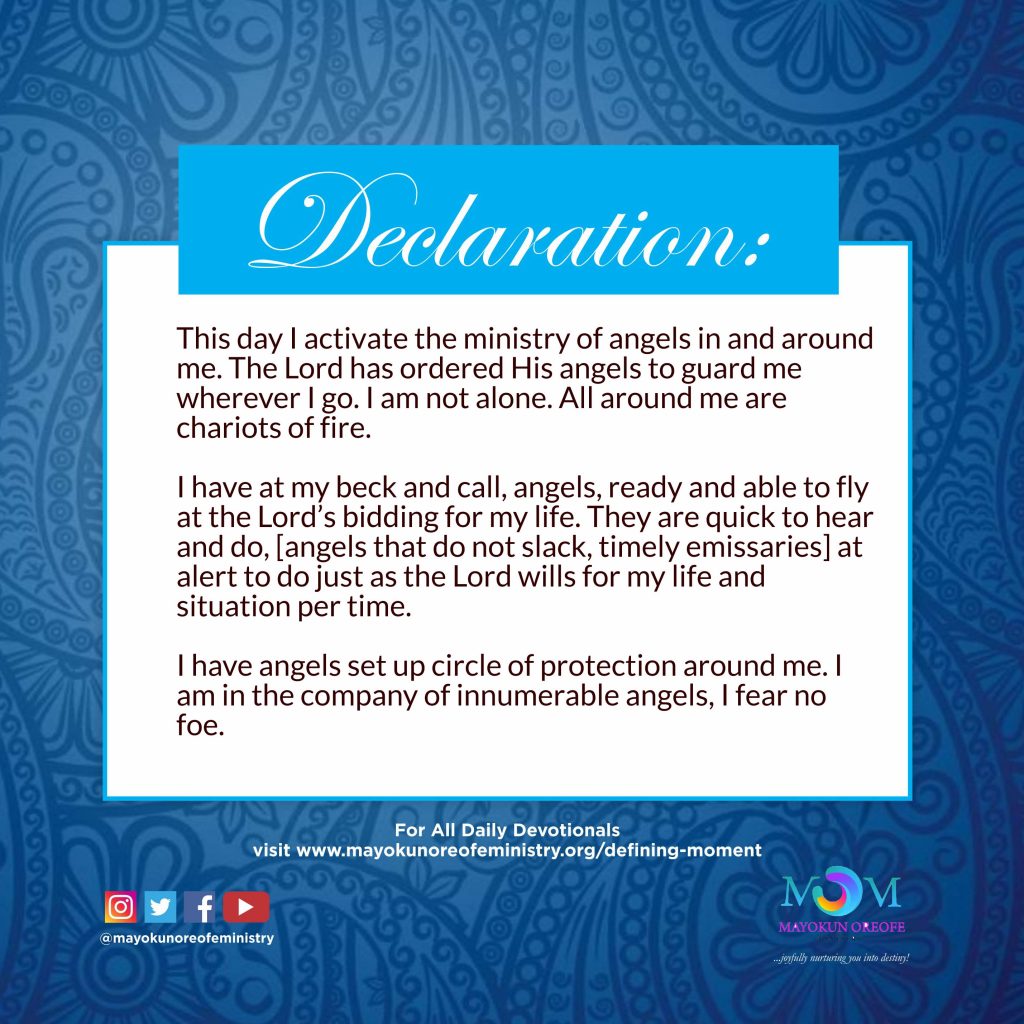