Word Study For Today: The Book of Psalms Chapter 23.

Intents or motives are extremely more powerful than your commitment or loyalty. Intent is the state of mind which informs or directs action. It can also be called the purpose or drive for doing things; it is the very reason (the goal, the object) behind every action or thought. Intent is crucial. It is not physically visible but extremely important that it should be known( especially to parties involved in any transaction or relationships; wherever human interaction exists intents are crucial).

If intent cannot be physically detected, yet crucial, how then do we detect it? Have you ever wondered why we should bother about it? Selah.

1 Chronicles 28:9a (MEV)==>“As for you, Solomon my son, know the God of your fathers and serve Him with a whole heart and with a willing spirit, for the Lord searches every heart and understands the intent of every thought…”

God is the detector and revealer of intents. His eyes sees and penetrates beyond the surface of man’s action. Loyalty is a dedicated commitment to a course; but as good and important as loyalty is, it shouldn’t be acknowledged or applauded when your intent/motive is not clearly known.

Samuel the man who never misfired in words actually did goof in his choice of a new king for Israel(when God said He was done with Saul hence was due for replacement).

>1 Samuel 16:3-7 (GNB)==>3)“Invite Jesse to the sacrifice, and I will tell you what to do. You will anoint as king the man I tell you to.” 4)Samuel did what the LORD told him to do and went to Bethlehem, where the city leaders came trembling to meet him and asked, “Is this a peaceful visit, seer?” 5)“Yes,” he answered. “I have come to offer a sacrifice to the LORD. Purify yourselves and come with me.” He also told Jesse and his sons to purify themselves, and he invited them to the sacrifice. 6)When they arrived, Samuel saw Jesse’s son Eliab and said to himself, “This man standing here in the LORD ‘s presence is surely the one he has chosen.” 7)But the LORD said to him, “Pay no attention to how tall and handsome he is. I have rejected him, because I do not judge as people judge. They look at the outward appearance, but I look at the heart.””

Samuel was going to choose a king by physical appearance, by poise and finesse. God screamed No! In fact God said Samuel’s choice was a person He had rejected. The Lord then said, making a good choice of steward(or as the case may be with any human), is not a functionality of  razzle-dazzle(razzmatazz)- a showiness or brilliance often without concomitant substance or worth.

Discernment by the spirit is what it will take to make right choice of persons per time. Activity is not productivity and either does not necessarily mean positive intent. Selah.

It is therefore expedient to turn to the Lord[to switch to God’s frequency] par time in order to see through His eyes, the heart of a man. Never forget God said in >Jeremiah 17:9-10 (NLT)==>““The human heart is the most deceitful of all things, and desperately wicked. Who really knows how bad it is? But I, the Lord, search all hearts and examine secret motives. I give all people their due rewards, according to what their actions deserve.””

Do not be carried away by the tongues of men, the smooth operations, the speed, the polish and all ‘show’ as can be physically put up around you… LET THE LORD UNVIEL THE HEART TO YOU!

Prayer Action:
**Glorify God as you sing songs of praises to Him.
**Pray in the Spirit for 15minutes.
**Honour the Lord Who sees that which ordinary eyes can’t see. [Reverence Him].
**Pray for the grace to be aligned with His vision par time[seeing what God sees].
**Pray for alertness and sensitivity of spirit[discernment].
**Pray that you will not fall prey to wrong intents and motives of man.
**Present confusing relationships/appointments/staffs etc.. unto Him to unveil as only He can. 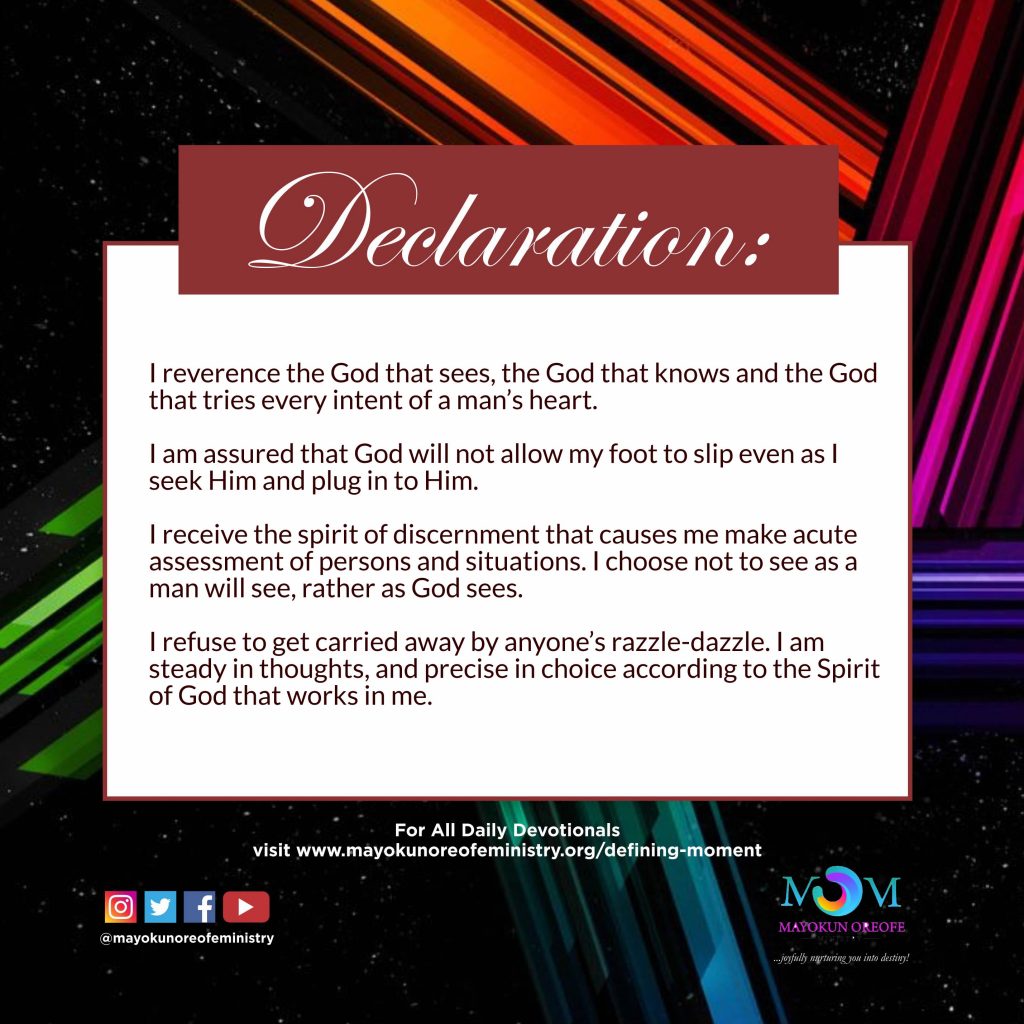