Word Study For Today: The Book of Psalm Chapter 147.

Opportunity is an occasion that seldom presents itself; it is for the purpose of taking a particular action. It’s a moment in time, a privileged time to act. It is an open door.

The dictionary defines opportunity as -an appropriate or favorable time or occasion.

-a situation or condition that is favorable for attainment of a goal.

-a good position, chance, or prospect, for advancement or success.

Scriptures says in Ephesians 5:16 (AMP) ==>“making the very most of your time [on earth, recognizing and taking advantage of each opportunity and using it with wisdom and diligence], because the days are [filled with] evil.”▪️

(MSG)==>make the most of every chance you get, these are desperate times▪️

An opportuned time is an advantageous time, the best time for execution, it’s the most ideal or appropriate time of action; hence it must not be missed. Paul said >“When I came to the city of Troas to preach the Good News of Christ, the Lord opened a door of opportunity for me.”[2 Corinthians2:12 NLT]▪️

Opportunity is a door that opens; it is expedient to walk through such doors when they open.

Joseph was a prisoner, yet one morning that appeared like every other morning presented itself to him as an opportunity to act out >Galatians 6:10 (NLT) ==> which says “Therefore, whenever we have the opportunity, we should do good to everyone—especially to those in the family of faith.”▪️ Joseph seized the moment to do good by meddling in the affairs of his co-inmates who had both had a dream overnight. Joseph who possessed the gift of interpretation was sensitive enough as to catch into the seeming gloominess of his colleagues, hence showed his own skill. It was such an ordained moment, an opportunity. It was this moment in time that presented itself, that eventually led to Joseph being sent for in the palace by Pharaoh.

>Genesis 41:9(NKJV)==>9 Then the chief butler spoke to Pharaoh, saying: “I remember my faults this day. 10 When Pharaoh was angry with his servants, and put me in custody in the house of the captain of the guard, both me and the chief baker, 11 we each had a dream in one night, he and I. Each of us dreamed according to the interpretation of his own dream. 12 Now there was a young Hebrew man with us there, a servant of the captain of the guard. And we told him, and he interpreted our dreams for us; to each man he interpreted according to his own dream. 13 And it came to pass, just as he interpreted for us, so it happened. He restored me to my office, and he hanged him.”14 Then Pharaoh sent and called Joseph, and they brought him quickly out of the dungeon; and he shaved, changed his clothing, and came to Pharaoh.▪️

If he hadn’t done that good when the opportunity presented itself that morning, Joseph would probably have remained in the prison forever.

Most times our opportunity doors never appears as an opportunity, it takes sensitivity to discern. Opportunities presents themselves  as trouble or challenge often times. This story of Joseph, Butler and Pharaoh refers. It was Joseph’s ability to slice through Pharaoh’s problem that fetched him the opportunity of becoming a Prime Minister in a strange land. >38)“So Pharaoh asked his officials, “Can we find anyone else like this man so obviously filled with the spirit of God?” 39)Then Pharaoh said to Joseph, “Since God has revealed the meaning of the dreams to you, clearly no one else is as intelligent or wise as you are. 40)You will be in charge of my court, and all my people will take orders from you. Only I, sitting on my throne, will have a rank higher than yours.”[Genesis 41:38-40 NLT]▪️

The doors that opened for Jospeh in all of these, were wrapped up in troubled waters. >“Dear brothers and sisters, when troubles of any kind come your way, consider it an opportunity for great joy.”[James 1:2 NLT]▪️

Jesus told His disciples in >Luke 21:12-13(NLT)==>12)“But before all this occurs, there will be a time of great persecution. You will be dragged into synagogues and prisons, and you will stand trial before kings and governors because you are my followers. 13)But this will be your opportunity to tell them about me.”▪️

Beloved, don’t get weary of challenges; they are synonymous with open doors (opportunity). That thing called a challenge or trouble, is your bridge or ladder, unto the land of victory, once you can see the moment in time to act. When you see trouble, an opportunity is wrapped up in it. Jesus said to His disciples, the trouble you’d see will be a sign, an indication of a kairos moment, (opportunity) to speak up for telling the world about Jesus.

Little wonder Ephesians 5:17(MEV) ==>“Therefore do not be unwise, but understand what the will of the Lord is.”▪️

When it comes to opportunity, you must be wise (discerning). You must understand that the will of God is, for you to ride on the back of trouble to create a moment in time. In essence, troubles and challenges are not in themselves an end; rather a means (vehicle) to an end (a beautiful and glorious end). Wow!

Just to reiterate James 1:2 > “My fellow believers, when it seems as though you are facing nothing but difficulties, see it as an invaluable opportunity to experience the greatest joy that you can!”[ TPT]▪️

Child of God, your challenge is a door to OPPORTUNITY.

-Ask the Lord for grace for sensitivity (discernment); that you may see beyond the surface of any matter.

-Pray for the ability to recognise opportunity when it shows forth [even when wrapped up in challenge/trouble].

-Pray for the grace to make the most of every presenting opportunity. 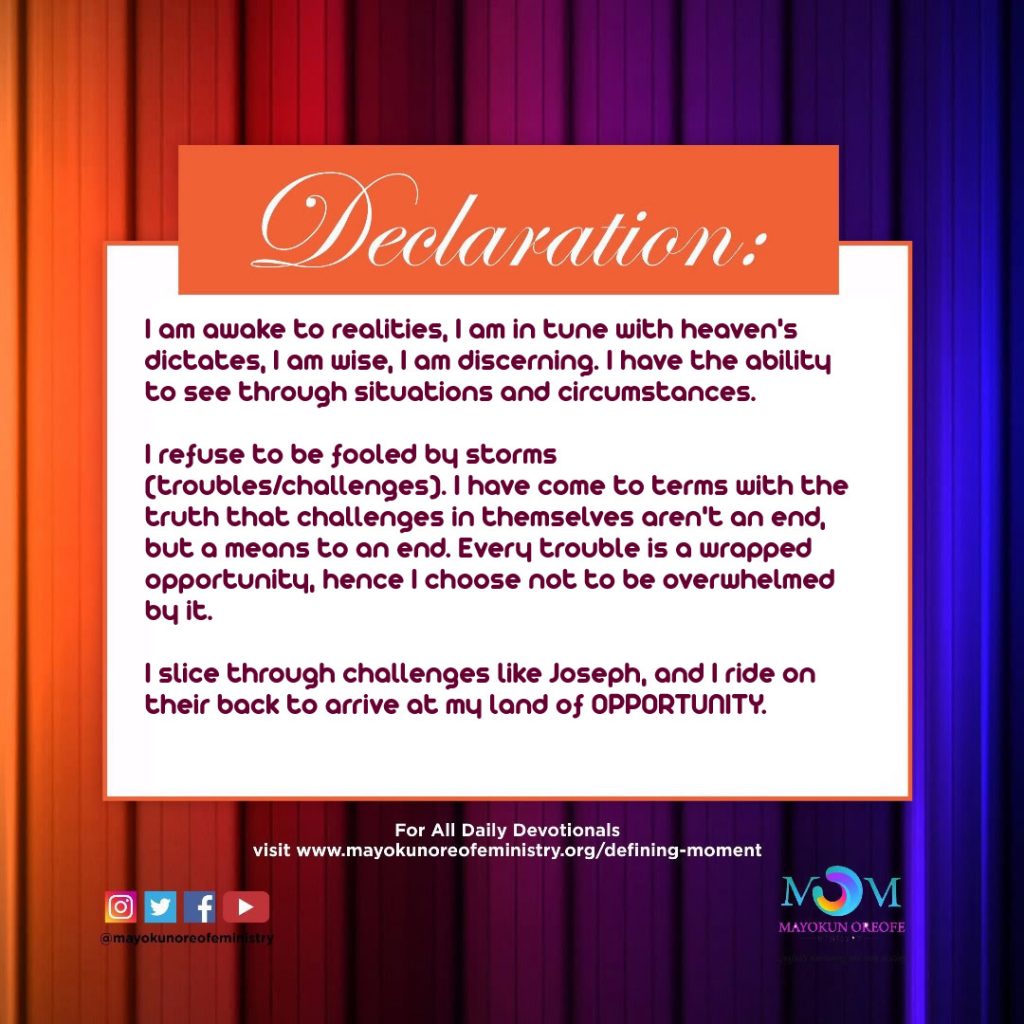