Word Study For Today: The Book of I John Chapter 3.

As flesh and blood, human beings fall into sin; we err from the path ordained for us by God. Sometimes this occurs deliberately like David the King opened his two eyes and walked into this error of adultery with Uriah’s wife, which in a bid to cover it up led to a further sin of murder.

>2 Samuel 11:2-4 (NIV)==>2)“One evening David got up from his bed and walked around on the roof of the palace. From the roof he saw a woman bathing. The woman was very beautiful, 3)and David sent someone to find out about her. The man said, “She is Bathsheba, the daughter of Eliam and the wife of Uriah the Hittite.” 4)Then David sent messengers to get her. She came to him, and he slept with her. (Now she was purifying herself from her monthly uncleanness.) Then she went back home.”▪️

>2 Samuel 11:14-17(NIV)==>14)“In the morning David wrote a letter to Joab and sent it with Uriah. 15)In it he wrote, “Put Uriah out in front where the fighting is fiercest. Then withdraw from him so he will be struck down and die.” 16)So while Joab had the city under siege, he put Uriah at a place where he knew the strongest defenders were. 17)When the men of the city came out and fought against Joab, some of the men in David’s army fell; moreover, Uriah the Hittite died.”▪️

Sometimes our sins ‘innocent’ errors >“Speak to the children of Israel, ‘If a person sins unintentionally in any of the things which the LORD has commanded not to be done, and commits any of them–”[Leviticus 4:2 AMP]▪️ >12)“Who can understand his errors or omissions? Acquit me of hidden (unconscious, unintended) faults. 13)Also keep back Your servant from presumptuous (deliberate, willful) sins; Let them not rule and have control over me. Then I will be blameless (complete), And I shall be acquitted of great transgression.”[Psalm 19:12-13 AMP]▪️

Whether our errors are deliberate or unintentional, as far as God is concerned sin is sin. >“All wrongdoing is sin…[1 John 5:17 AMP]▪️

The beauty of our lives however is that our precious loving Father isn’t out to condemn us, hence He has given us the will power of repentance. He has given us the ability to have a rethink of our errors and a heart of sorriness for same. If we are sorry about our wrongdoing and we ask Him for forgiveness, He is a gracious God as to cleanse us from all our unrighteousness.

>“If we confess our sins, he is faithful and just to forgive us our sins, and to cleanse us from all unrighteousness. [1 John 1:9 KJV]▪️

It is therefore expedient to plead for His mercy once we find ourselves in any form of error. The Prophet Nathan had to make David realise his errors which he initially had planned to cover up, and live life as normal. The bible says in >1 John 1:8 & 10(KJV)==>8)“If we say that we have no sin, we deceive ourselves, and the truth is not in us. 10)If we say that we have not sinned, we make him a liar, and his word is not in us.”▪️

David was living in deceit till the scales were forcefully removed from his eyes, when his wrong was put to him in the face >7)“And Nathan said to David, Thou art the man. Thus saith the Lord God of Israel, I anointed thee king over Israel, and I delivered thee out of the hand of Saul; 8)And I gave thee thy master’s house, and thy master’s wives into thy bosom, and gave thee the house of Israel and of Judah; and if that had been too little, I would moreover have given unto thee such and such things. 9)Wherefore hast thou despised the commandment of the Lord, to do evil in his sight? thou hast killed Uriah the Hittite with the sword, and hast taken his wife to be thy wife, and hast slain him with the sword of the children of Ammon.”[2 Samuel 12:7-9KJV]▪️

As soon as he came to the consciousness of the fact that his sins trailed after him, He became remorseful, PENITENT.

He cried out to God >1-2)“God, give me mercy from your fountain of forgiveness! I know your abundant love is enough to wash away my guilt. Because your compassion is so great, take away this shameful guilt of sin. Forgive the full extent of my rebellious ways, and erase this deep stain on my conscience.”[Psalms 51:1-2TPT]▪️

<<<This is what God expects from us when we err. Living in self righteousness and pretending we have no sin is grievous error because we seem to take God as a fool. It’s time we rise up to sincerity and honesty before our maker. Become a David, at every junction of sin (intentional or unintentional), become PENITENT.

-Worship the Lord Almighty from a penitent heart.

-Pray in the language of Mercy.

-Ask the Lord for the forgiveness of every shortcoming and error of whatever form in your life.

-Through the day, cry out for the Mercy of God. 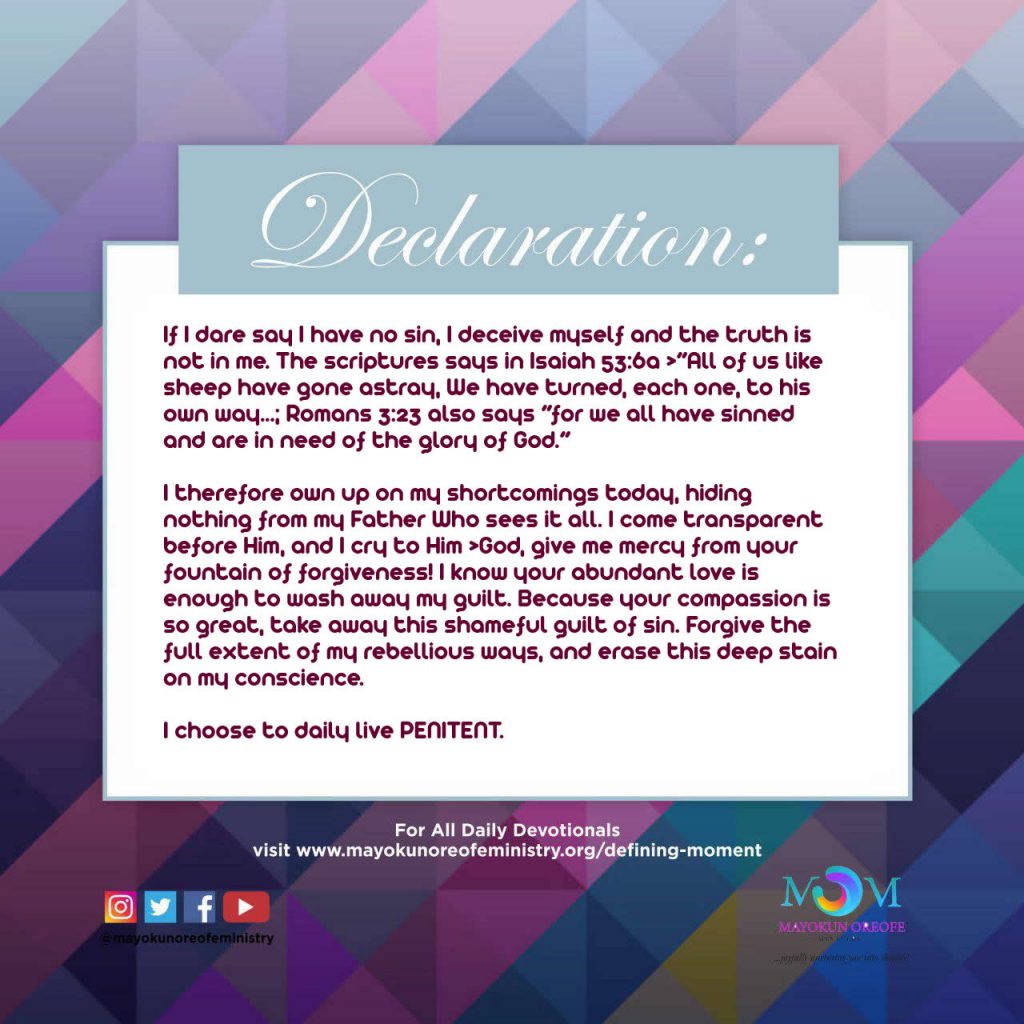