Word Study For Today: The Book Of Psalm Chapter 107.

Through persistence the wall of Jericho came down. In the place of prayer, the ‘game’ of persistence plays out in victory. Keeping at it will give it the heat required to boil up the ‘water’ of your request. Scriptures says in James 5:16b(AMP)==> …The heartfelt and persistent prayer of a righteous man (believer) can accomplish much [when put into action and made effective by God–it is dynamic and can have tremendous power].”

> “And he spake a parable unto them to this end, that men ought always to pray, and not to faint;” [Luke 18:1 KJV]. Continuity without tiring out or fainting is persistence. When persistence is deployed in the place of prayer, it works like wild fire. >Acts 12:5, 7-8, 11 (KJV)==>5)“Peter therefore was kept in prison: but prayer was made without ceasing of the church unto God for him. 7)And, behold, the angel of the Lord came upon him, and a light shined in the prison: and he smote Peter on the side, and raised him up, saying, Arise up quickly. And his chains fell off from his hands. 8)And the angel said unto him, Gird thyself, and bind on thy sandals. And so he did. And he saith unto him, Cast thy garment about thee, and follow me.

11)And when Peter was come to himself, he said, Now I know of a surety, that the Lord hath sent his angel, and hath delivered me out of the hand of Herod, and from all the expectation of the people of the Jews.”

Fervent and persistent prayers were offered by the congregation of the early church and boom, Peter got released. Of a truth the consistent, non tiring, prayer of the believer avails much.

Persistent prayer will break the hardest rock. Persistence will never allowing sleeping dogs lie. What is due you can never remain held back if you deploy the tool of persistence in the place of prayer.

Beloved, keep asking, keep seeking, keep knocking; it will answer to you. Deploy the tool of PERSISTENT PRAYER. 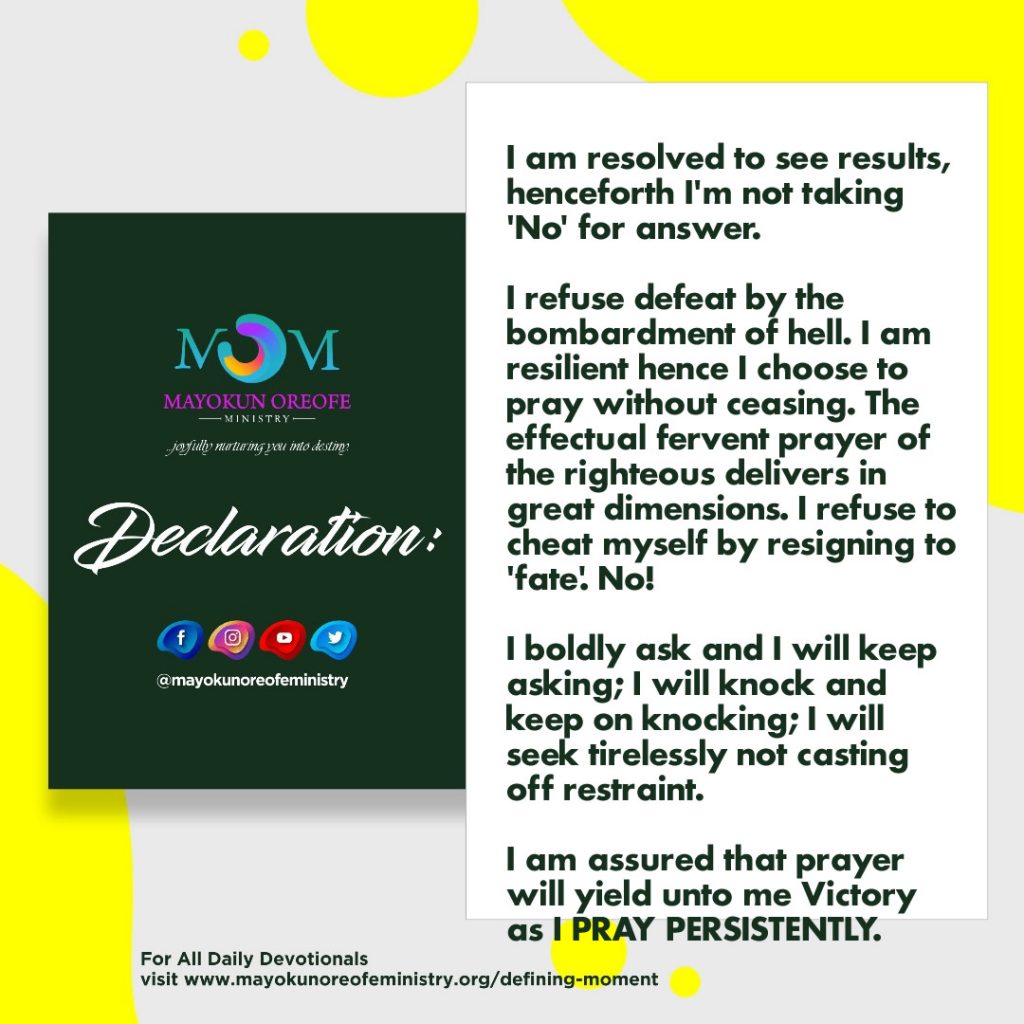