Only radical faith can combat rascally situations that we find ourselves in in this dark world of sin. Operating at the basest level of faith will only short change us from the dynamic possibilities we have in the power of our Lord Jesus Christ. To quench the fiery darts of the enemy in diverse facets of our lives, only such faith as Radical can. >1 Peter 5:8-9a (TPT)==>8)“Be well balanced and always alert, because your enemy, the devil, roams around incessantly, like a roaring lion looking for its prey to devour. 9)Take a decisive stand against him and resist his every attack with strong, vigorous faith…”

Strong and Vigorous[Radical] Faith, is the undisputable weapon we must possess to overcome the wiles of the enemy.

The Bible says in >Daniel 11:32b (NKJV)==>“…but the people who know their God shall be strong, and carry out great exploits.”

Those who know their God must possess Radical(strong) Faith that will deliver unto them great exploits.

Radical Faith is an adamant, non-compromising, non-conforming, unconventional Faith. It is taking a very decisive and unshakeable stand. It’s such Faith that believes in no other option than for God to come through in that situation being encountered.

Radical Faith is such Faith as Abraham had >“who, contrary to hope, in hope believed, so that he became the father of many nations, according to what was spoken, “…[Romans 4:18 NKJV]. Oh, Abraham a man of like passion, bagged himself the title of Father of Faith because he chose to be Radical in his stand believing for the promise of many years. He refused to be deterred by the prevailing physical conditions. Strong was his Faith, Vigorous was his Faith, Adamant was his Faith even in the face of obvious and an “incurable barrenness”.

Dictionary defines  Radical as to favour a drastic course; being militant in action; to follow strong convictions; being non-compromising, unconventional and non-conforming.

No wonder Centurion(Roman military general) had such strength of Faith[Radical in nature], that made Jesus marvel. >Luke 7:9 (TPT) says==>“Jesus marveled at this. He turned around and said to the crowd who had followed him, “Listen, everyone! Never have I found even one among the people of God a man like this who believes so strongly in me.”▪️ In short, Jesus marveled at such Militant Faith. The Centurion, more like said to Jesus “Jesus don’t put me on hold, I refuse to wait, I refuse to allow anyone distract you from giving attention to my matter. I am a man under authority, and I know how commands work… Speak only and it will be done, I believe it strongly. Am not compromising on getting my servant raised, do the unconventional by just speaking the word of healing, I will not conform to bureaucracy of having you come before I get you to heal him, oh no… I choose to be Radical, am a military general; speak the word only!”

Beloved are you up for such uncommon level of Faith? Are you up for exploits in your life? Radical Faith like that of the Cannanite woman in Matthew 15, is what you need. Faith that breaks through every rising barrier and opposition. Faith that has the right answer for every noise of the enemy like hot knife slicing through frozen butter. She cried for mercy concerning her daughter who was under demonic attack. Jesus giving no initial reply, His disciples raking and asking she be sent away… this woman remained adamant. Cried the more for mercy. Matthew 15:24-27 says > “I was sent only to help God’s lost sheep—the people of Israel.” 25)But she came and worshiped him, pleading again, “Lord, help me!” 26)Jesus responded, “It isn’t right to take food from the children and throw it to the dogs.” 27)She replied, “That’s true, Lord, but even dogs are allowed to eat the scraps that fall beneath their masters’ table.”. What a Radical expression[an unconventional response, a decisive non-conforming front]. She refused to cave in. She believed even crumbs from the table will feed the dog full. Such Faith! Even Jesus was thrilled at her Radical Faith hence in Matthew 15:28a(TPT)==>28) … Jesus answered her, “Dear woman, your faith is strong! What you desire will be done for you.”

Don’t we all need this measure of Faith? Yes we do. To avoid the tempter getting the best of us, we need Radical Faith to stand firm. Apostle Paul speaking in >1 Thessalonians 3:5 NLT)==> “That is why, when I could bear it no longer, I sent Timothy to find out whether your faith was still strong. I was afraid that the tempter had gotten the best of you and that our work had been useless.”▪️

Paul was by all standards Radical in his Faith. He used to be a rascal hence he understood what it takes to combat radicalism of the dark world. It’s therefore very important for us to step up our game; if you don’t want the devil to mess around with your glorious destiny as scripted for you by God, then you’ve got to get Radical in your Faith.

The Holy Spirit that distributes gifts unto men is able to give unto you as is custom of Him to do, this gift of Faith. >“And to another, the same Spirit gives the gift of faith.[1 Corinthians 12:9 TPT].

This gift of Faith from the Holy Spirit, is that unshaken, non-compromising, non-conforming  unconventional and adamant belief in the ability and power of God to make happen whatsoever it is we desire according to His script.

Let your Faith become as hot oil on fire, so hot, that flies can’t move near. Get Radical, possess the RADICAL FAITH!

-Praise in songs the Lord Almighty.

-Speak in the language of the Spirit that gives freely the gift of Faith.

-Receive the Radical Faith that bows to no pranks of the devil…Declare your Victory in Christ Jesus. 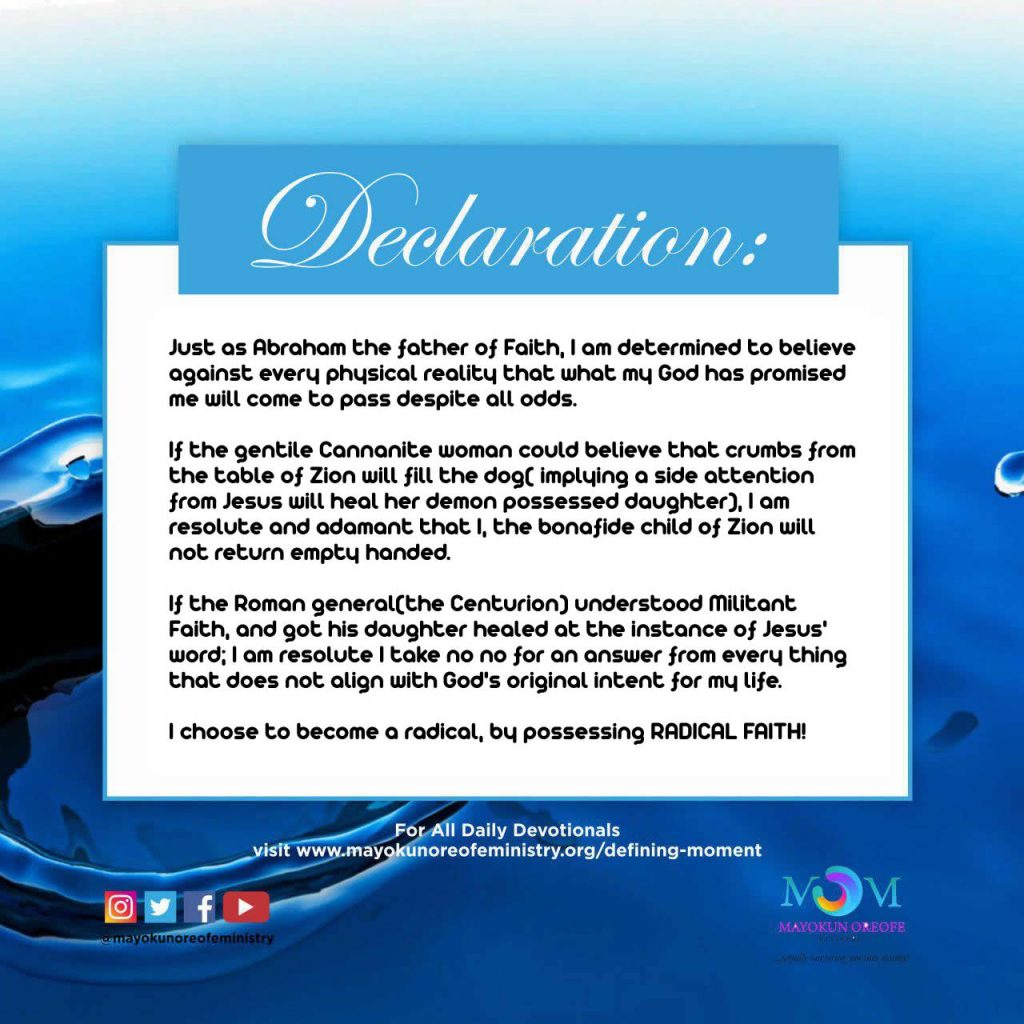