Word Study For Today: The Gospel According to Luke Chapter 23

Devotion: RUN YOUR RACE WITH ENDURANCE.

Our highest role model is Christ, and being His, it’s expected of us to follow His example and imitate Him.

The highest form of leadership is the one in which the follower sees the leader as a safe model, worthy of trust.

>“Imitate God, therefore, in everything you do, because you are his dear children. Live a life filled with love, following the example of Christ. He loved us and offered himself as a sacrifice for us, a pleasing aroma to God.”[Ephesians 5:1-2 NLT].

Christ sacrificed, He paid the price not for Himself [but really He did it for us]. He is our example. We ought therefore to emulate Him, as He has said >“I have given you an example to follow. Do as I have done to you.”[John 13:15NLT].

God made provision ahead that His people would become like His Son Jesus, who ran His race and paid the price that brought about His prize. Following in His steps therefore, we ought to walk same path- endure and pay the price our destiny requires.

>“For God knew his people in advance, and he chose them to become like his Son, so that his Son would be the firstborn among many brothers and sisters.”[Romans 8:29 NLT]. Scripture says > “looking unto Jesus, the author and finisher of our faith…” [Hebrews 12:2a NKJV].

Run with endurance, the race God has set before you.

>Hebrews 12:1 (NLT) instructs ==>“Therefore, since we are surrounded by such a huge crowd of witnesses to the life of faith, let us strip off every weight that slows us down, especially the sin that so easily trips us up. And let us run with endurance the race God has set before us.”

Endurance is the ability to continue or to last, despite adverse condition/stress/

hardship. It implies keeping on in the face of unpleasantness. It’s not a race of comfort or pleasure, it’s walking on hard terrains; it requires tenacity, hence you have to resolve to conquer, despite all shortcomings.

Hebrews 12:2b says==>for the joy that was set before Him endured the cross, despising the shame, and has sat down at the right hand of the throne of God.”

Each one of us should run with endurance the race set before us. Every soul has a set race. We aren’t called to run another’s race [the race of John the Baptist was different from the race of Jesus Christ; but bottom line is, they both had a race to run and they did run). In running your race, it is not going to be a walk over, rather it is going to require your running it with endurance.

Jesus endured! There were too many pains on His path. Talk of condemnations, insults, ridiculing, agony, etc yet He took them sall >“Just consider and meditate on Him who endured from sinners such bitter hostility against Himself [consider it all in comparison with your trials], so that you will not grow weary and lose heart.”

Jesus had a goal, and He was bent on hitting His mark, hence He persevered, bore the shame, despised the insults till He got to His finish line. He made it! He won the incomparable Prize. And so today He is seated at the right Hand of God’s throne, over and above principalities and powers that did all to frustrate and stall Him.

To this we also are being called >“For God called you to do good, even if it means suffering, just as Christ suffered for you. He is your example, and you must follow in his steps.”[1 Peter 2:21NLT].

> “He did not retaliate when he was insulted, nor threaten revenge when he suffered. He left his case in the hands of God, who always judges fairly.”[1 Peter 2:23 NLT].

That is a life worthy of emulation, sacrificial living and giving.

You can say like Paul the Apostle said in > 1 Corinthians 9:26-27(MSG)==>“I don’t know about you, but I’m running hard for the finish line. I’m giving it everything I’ve got. No sloppy living for me! I’m staying alert and in top condition. I’m not going to get caught napping, telling everyone else all about it and then missing out myself.”

Pay the price that your destiny requires. Endure! What is ahead is well worth paying the price for.

-Give thanks to the Lamb Who paid the price.

-Ask God for the baptism of endurance [that you might be able to stand the test of time paying the price].

-Ask God for grace to finish strong [hitting the mark, receiving the prize]. 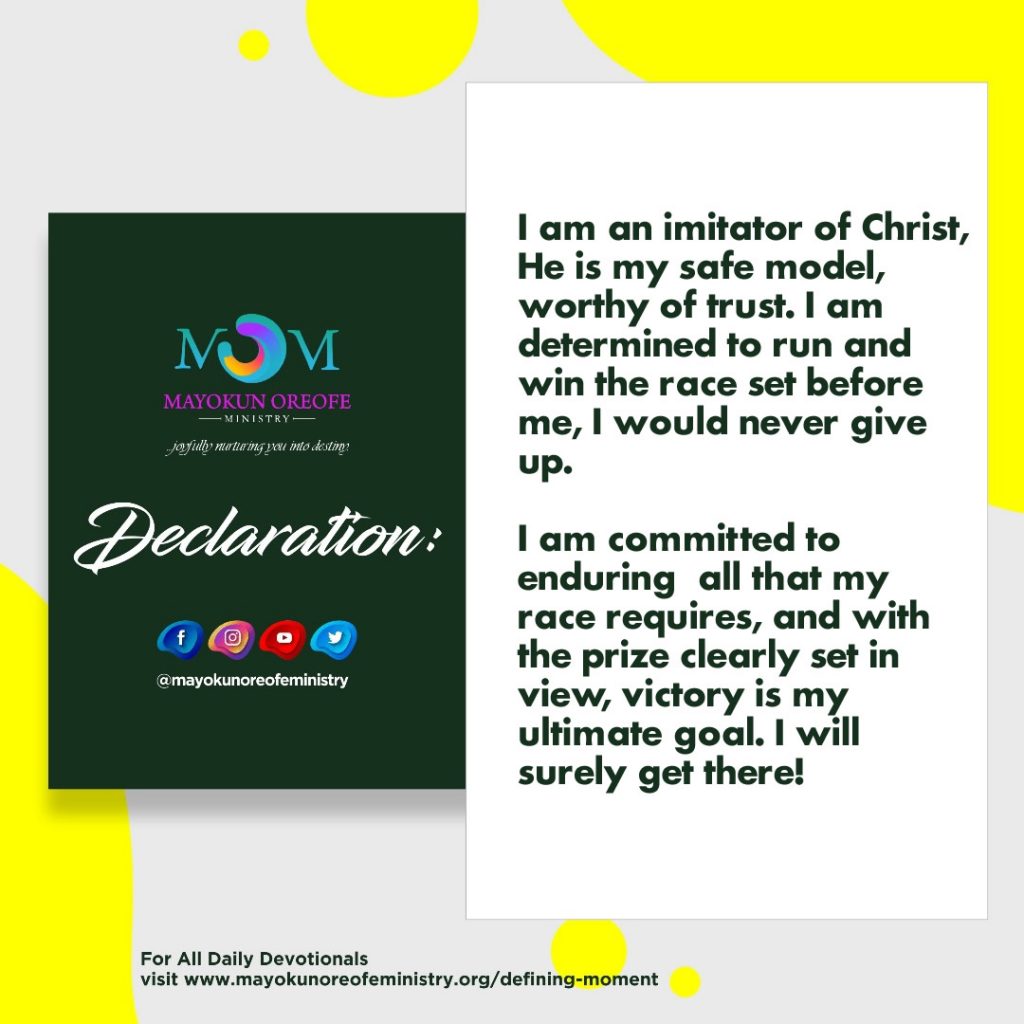