Word Study for Today: The Book Of Psalms Chapter 51.

To shepherd is to watch over carefully, to tend and to guard. The shepherd is a person who herds, tends, and guards the sheep; a person who protects, guides, or watches over a person or group of people. >John 10:4 NIV) says a shepherd, >>>“When he has brought out all his own, he goes on ahead of them, and his sheep follow him because they know his voice.” >>> A shepherd gives leadership to the sheep, leading them in the way to go; ensuring they are not misled. The sheep that belongs to the shepherd know his voice so well, they don’t mistake it for that of another; hence they hear the shepherd when he calls unto a particular direction and they follow as he leads them to safe haven, to feed, drink and rest. The shepherd is the ‘google map’ for the sheep.

The shepherd risks his life in making sure the sheep are okay [even if it means standing in the way of the wolf to defend the sheep from it]; the shepherd loves not his life unto death, caring to the core. The shepherd will not suffer the sheep to danger >1 Samuel 17:34-35 (NIV)==>34)“But David said to Saul, “Your servant has been keeping his father’s sheep. When a lion or a bear came and carried off a sheep from the flock, 35)I went after it, struck it and rescued the sheep from its mouth. When it turned on me, I seized it by its hair, struck it and killed it.”

There’s however the real shepherd and a hired shepherd(hireling). Their responsibility is quite similar only that the latter is a paid worker for the other and the sense of ownership is not in the latter, so in the face of trouble, his commitment to the sheep gives him away as a hired worker. His life is priority to him beyond that of the sheep. >“The hired hand is not the shepherd and does not own the sheep. So when he sees the wolf coming, he abandons the sheep and runs away. Then the wolf attacks the flock and scatters it. The man runs away because he is a hired hand and cares nothing for the sheep.”[John 10:12-13 NIV].

Where there is absence of the shepherd the sheep scatter (separate and disperse, they go in different directions, they throw loosely about, and set asunder). So God said >“I will place over them one shepherd, my servant David, and he will tend them; he will tend them and be their shepherd.”[Ezekiel 34:23 NIV]. God has appointed shepherds who are true at heart, having a sense of ownership and responsibility over the sheep. Who are to [and assuredly will] watch over the sheep, tending, caring, protecting and generally being in charge of the sheep. They will not allow a sheep to loose track, ensures all is well with the sheep even at the risk of their own lives. >Luke 15:4-5 (NKJV)==> 4)“What man of you, having a hundred sheep, if he loses one of them, does not leave the ninety-nine in the wilderness, and go after the one which is lost until he finds it? 5)And when he has found it, he lays it on his shoulders, rejoicing.”

David was one true shepherd of Israel. David himself however records  in Psalm 23:1 -4(NIV)==> 1)“The Lord is my shepherd, I lack nothing. 2)He makes me lie down in green pastures, he leads me beside quiet waters, 3)he refreshes my soul. He guides me along the right paths for his name’s sake. 4)Even though I walk through the darkest valley, I will fear no evil, for you are with me; your rod and your staff, they comfort me.”

The Shepherd of shepherds guides unto peace haven, His rod and staff brings great comfort and the sheep have no need to fear even though the valley of death stares them in the face. They are safe in the arms of the Shepherd. Jesus said rightfully, “I am the good Shepherd; I know my sheep and my sheep know me—”[John 10:14 NIV].

Prayer Action:
**Give glory to the Shepherd of shepherds.
**Pray in the language of the Spirit for 15 minutes.
**Surrender yourself to the Good Shepherd, committing to follow every step of the way as He leads.
**Tell fear, ‘begone’;  because you have in your lead the good Shepherd.

We know you are blessed by this devotional. We appreciate your comments below as it blesses us right back and encourages others who might be reading this, anywhere in the world. Shalom. 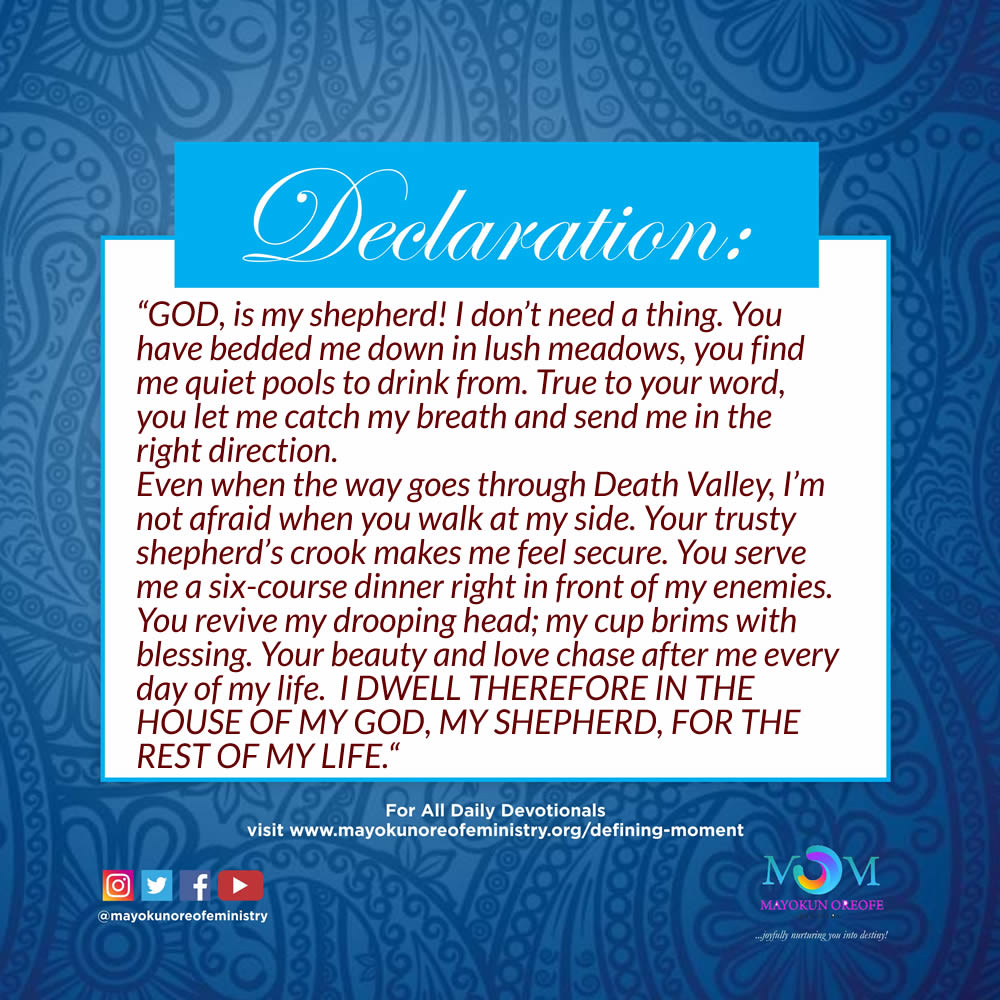