Word Study For Today: The Book of II Peter Chapter 2

To be anointed is to be consecrated, sanctified, blessed, ordained, and hallowed. An anointed person is sometimes consecrated in a ceremony that includes the application of a token oil. An anointed one is dedicated to a specific service of God. He is one ordained (predestinated)for an assignment, or a role.

An anointed one is chosen, set apart, and appointed for a specific task under God>2 Samuel 22:51 : (NET)==>“He gives his chosen king magnificent victories; he is faithful to his chosen ruler, to David and to his descendants forever!” (AMP)==>“He is a tower of salvation and great deliverance to His king, And shows lovingkindness to His anointed, To David and his offspring forever.””

The anointed (chosen and set apart) is hallowed, (honoured, reverenced and revered) as  a holy one. In short, the anointed one is Blessed and called to be great, made with a purpose, honest and pure, set aside for a unique reason. He is unshakable under God, strong and predestined to be awesome .

The anointed is given high and due regards, hence never treated as a common place thing or being. God is deeply interested in the anointed, so He guards and makes special provision for him.>1 Samuel 2:10b (NET)==>The LORD executes judgment to the ends of the earth. He will strengthen his king and exalt the power of his anointed one.””▪️

The Lord Almighty [He] gives victory to His anointed and answers Him when He calls. The Lord will not turn His ears away from the cry of the anointed, just as a nursing mother will not ignore the cry of her child. >Psalm 20:6(NIV)==> “Now this I know: The Lord gives victory to his anointed. He answers him from his heavenly sanctuary with the victorious power of his right hand.”▪️

The anointed is empowered by God; He saves and shields them. The attention of God is on the anointed, for He is the One Who anointed us >2 Corinthians 1:21b,(GNB)==>“…it is God himself who has set us apart,” (NCV)==>…“God made us his chosen people.” NIV)==>“…He anointed us,”▪️

Beloved, when it comes to being anointed, chosen and set apart, God is at the centre of it all. The anointed is not the idea of any man, though a man might be used in the physical to actualise the process, but ultimately God is the orchestrator. The anointed is God’s choice and prerogative. >“The Spirit of the Lord is on me, because he has anointed me to proclaim good news to the poor. He has sent me to proclaim freedom for the prisoners and recovery of sight for the blind, to set the oppressed free, ”[Luke 4:18 NIV]▪️ >“how God anointed Jesus of Nazareth with the Holy Spirit and power, and how he went around doing good and healing all who were under the power of the devil, because God was with him. [Acts 10:38 NIV]▪️

>““This is what the Lord says to his anointed, to Cyrus, whose right hand I take hold of to subdue nations before him and to strip kings of their armor, to open doors before him so that gates will not be shut:”[Isaiah 45:1 NIV]▪️ >“I have found David my servant; with my sacred oil I have anointed him.”[Psalm 89:20 NIV]▪️

-Bless the Lord from the depth of your being.

-Speak in the prayer language for 15minutes.

-Ask the Lord Almighty to set you apart unto Himself afresh this day, [anoint you for exploits, as predestined from the foundations of the earth]. Pray fresh grease to your destiny wheels so you won’t crack and crank as you move on.

-Ask the Lord to defend and save you, and give you victory as He gives to His Anointed. 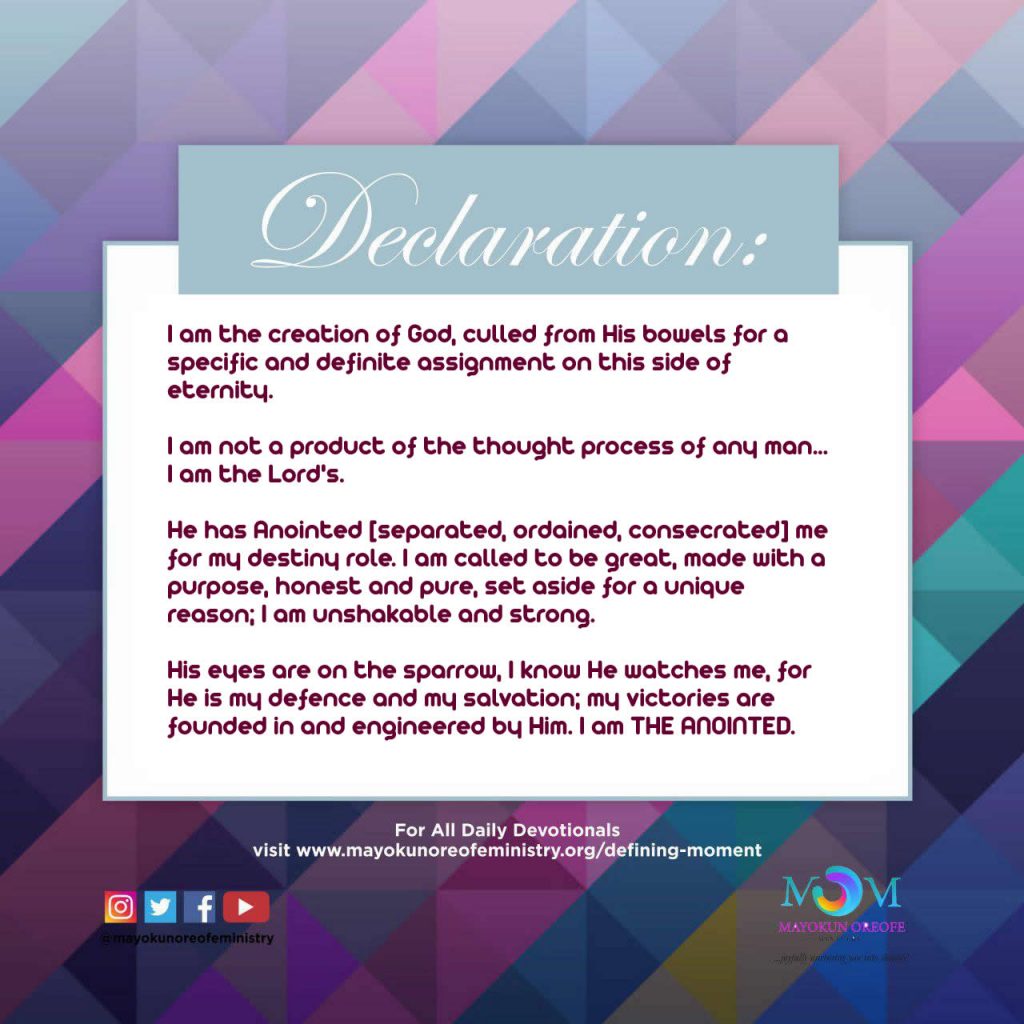