Word Study For Today: The Book of Psalms  Chapter 25.

Devotion: THE HAND OF THE LORD.

With the exceptional Hand of the Lord, provision of need is made available without reservation; requests and desires are granted as He did in the case of Ezra. The Lord’s Hands compels your voice to be heeded, as His Hand places in you the word soothing in the ears of hearers causing them to defer to your submission. The Hand of the Lord upon a man will redirect his vision.

The following scriptures confirm the efficacy of the Hand of the Lord:

>Ezra 7:6 (NIV)==>“this Ezra came up from Babylon. He was a teacher well versed in the Law of Moses, which the LORD, the God of Israel, had given. The king had granted him everything he asked, for the hand of the LORD his God was on him.”

>Isaiah 66:14 NKJV)==>“When you see this, your heart shall rejoice, And your bones shall flourish like grass; The hand of the LORD shall be known to His servants, And His indignation to His enemies.”

>1 Samuel 7:13 (NIV)==>“So the Philistines were subdued and they stopped invading Israel’s territory. Throughout Samuel’s lifetime, the hand of the LORD was against the Philistines.”

>I Kings 18:46 (NKJV)==>“Then the hand of the LORD came upon Elijah; and he girded up his loins and ran ahead of Ahab to the entrance of Jezreel.”

>Isaiah 53:1 (DBY)==>“Who hath believed our report? and to whom hath the arm of Jehovah been revealed?”

May you encounter the revealed Arm[Hand] of the Lord.

Prayer Action:
**Worship the Lord with all sincerity.
**Pray in the Spirit for an extended period of time.
**Ask that the Hand of the Lord comes upon you to do as occasion demands.
**Pray the Hand of God into specific situations of your life now. 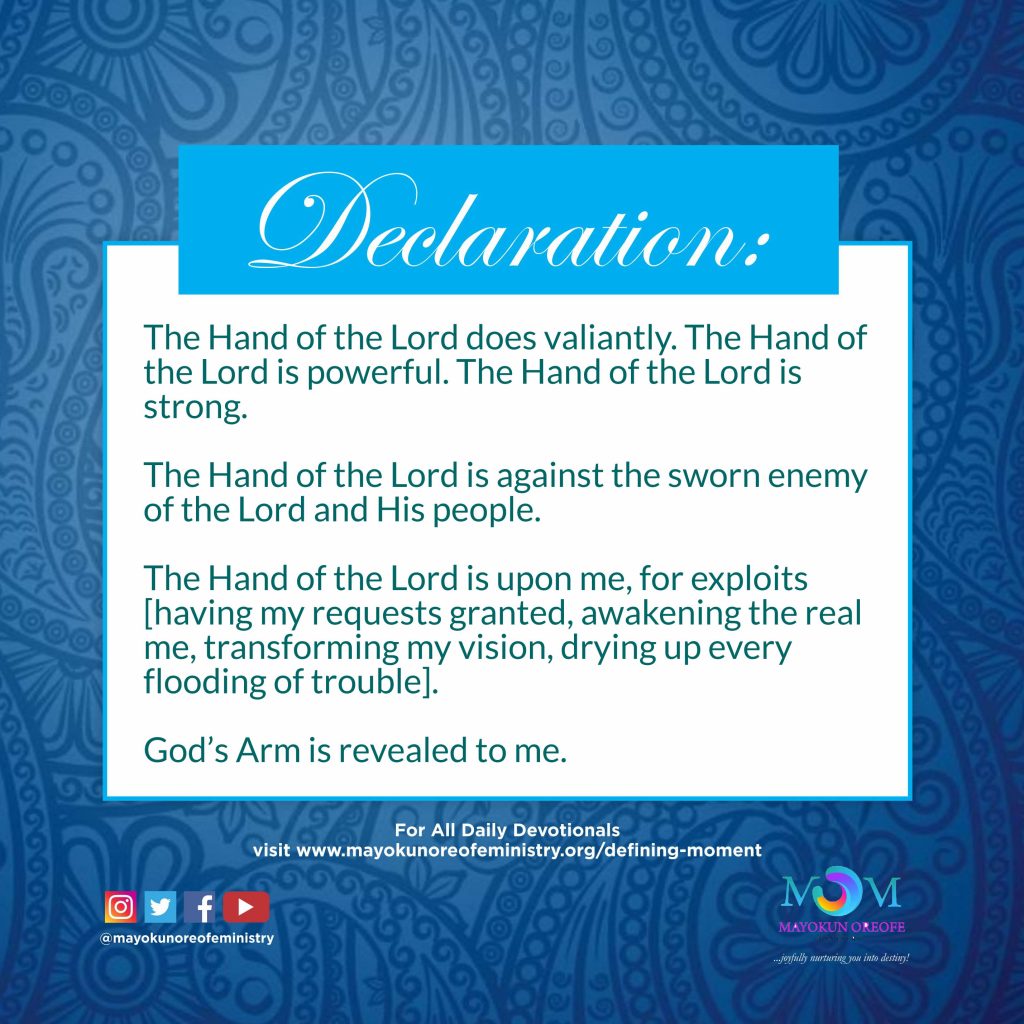