Devotion: THE UPRIGHT AND JUST GOD.

An infallible, yet consistent truth that is essential to know is that our God is an upright and just God. There is no shadow of turning with Him.

> “He is the Rock, his works are perfect, and all his ways are just. A faithful God who does no wrong, upright and just is he.” [Deuteronomy 32:4 NIV].

You have got to embrace this truth about Him, let it sink into your heart, and percolate in your spirit: God is One Who does no wrong; He is Just!. Simply saying; He is guided by truth, reason, justice, and fairness. He is ethical, equitable, unbiased, nonpartisan and objective. He sees what ordinary eyes can’t see, He knows what human minds can’t comprehend. This Just God is where you are not; He is the diviner of motives and intents. Sincerely, GOD IS JUST.

To this end, He alone knows truly who deserves a lifting and who needs a humbling. With Him you can’t go wrong in such appraisal or decision. >1 Samuel 2:7-8(GW)==>7)“The LORD causes poverty and grants wealth. He humbles ⌊people⌋; he also promotes them. 8)He raises the poor from the dust. He lifts the needy from the trash heap in order to make them sit with nobles and even to make them inherit a glorious throne. “The pillars of the earth are the LORD’s. He has set the world on them.”

Left to man alone, he will favour only those in his good books, those who have in one way or another curried his favour.

But as for our God, He is not dependent on human report to adjudge rightly. He decides who remains and who leaves; who is abased and who is elevated.  >“thus says the Lord GOD, ‘Remove the turban and take off the crown; things shall not remain as they have been. Exalt that which is low and abase the high.”[Ezekiel 21:26 AMP]

He sees the intricate part of men; He knows the one whose heart is puffed.

>Luke 12:16-20 (NIV)==>16)…“The ground of a certain rich man yielded an abundant harvest. 17)He thought to himself, ‘What shall I do? I have no place to store my crops.’ 18)“Then he said, ‘This is what I’ll do. I will tear down my barns and build bigger ones, and there I will store my surplus grain. 19)And I’ll say to myself, “You have plenty of grain laid up for many years. Take life easy; eat, drink and be merry.” ’ 20)“But God said to him, ‘You fool! This very night your life will be demanded from you. Then who will get what you have prepared for yourself?’”

Physical success or elevated position is not an assured status except the Lord says it is. The Luke 12 story, naturally does not present the business man as puffed. [He appears more like one with great aspirations and in pursuit of growth as is expected of an entrepreneur; alas, the Just God saw beyond face value, He picked his ingenuity and read his pride… and He gave a verdict over him.

Beloved, take note >Daniel 2:21 (NKJV)==>“And He changes the times and the seasons; He removes kings and raises up kings; He gives wisdom to the wise And knowledge to those who have understanding.”

It will never be of him who chooses to rise, then he rises. Promotion is not by human strength. If the Just God doesn’t decide and approve your lifting, nothing progressive happens.

>Psalm 127:1(NIV)==>“Unless the Lord builds the house, the builders labour in vain. Unless the Lord watches over the city, the guards stand watch in vain.”

God is the judge, hence He is Just. >“All the trees of the field will know that I the LORD bring down the tall tree, exalt the low tree, dry up the green tree, and make the dry tree flourish. I am the LORD; I have spoken, and I will fulfill it. ”[Ezekiel17:24 AMP]

The choice is the Lord’s. >Psalms 113:7-8 (GW)==>7)“He lifts the poor from the dust. He lifts the needy from a garbage heap. 8)He seats them with influential people, with the influential leaders of his people.”

No one classifies the poor as deserving, but the Just God decides to lift them from the dust. He takes them into the corridors of power, causes them to seat and mingle with the influential leaders.

Of a truth Hannah got it right, >>> only a Just God could adjudge that  “…the barren [woman] gives birth to seven, …she who has many children withers away.”[1 SAMUEL 2:5b AMP]

Who alone does such amazing wonders; but the Just God. He does what is right. GOD IS JUST!

-Be thankful, sing unto the Lord.

-Pray in the just language for 15 minutes.

-Ask the Lord for mercy [that His mercy will locate you, causing Him to see you from the stand point of righteousness]

-Pray that the Lord will not remove the turban or crown from your head, but that your lifting shall be sustained. 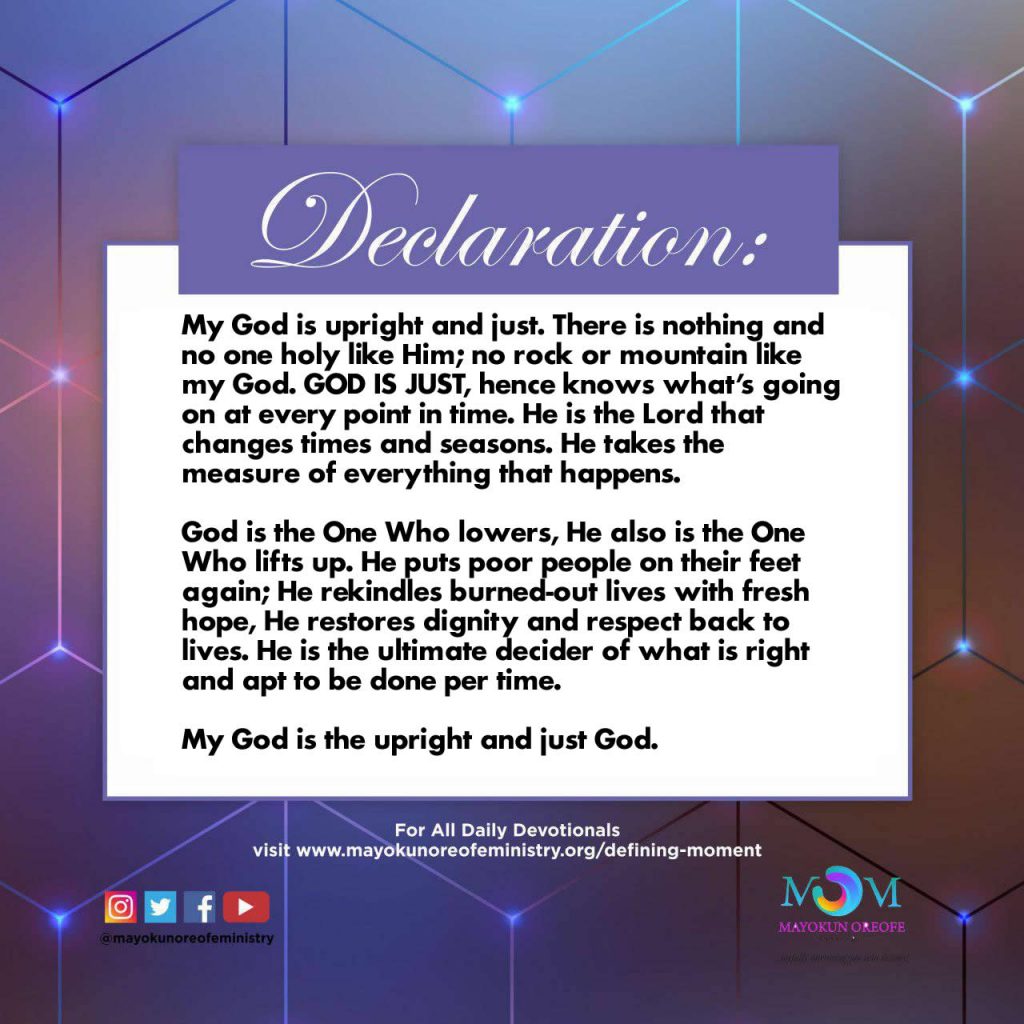