Word Study for Today: Gospel According To Luke Chapter 9.
Devotion: THERE’S AN APPOINTED TIME!.
Texts: Genesis 15:1-14. | Daniel 9:1-3; Jeremiah 29:10-14. | Habakkuk 2:2-3.
The Vision (promise) God has earmarked for you is yet for an Appointed Time. Every plan and purpose of God is timed. With God nothing just happens, everything is well planned out. Like a movie script writer, God has every act and every scene properly mapped out and timed. Something must happen before another.
> “For it is precept upon precept, precept upon precept, line upon line, line upon line, here a little, there a little.”[Isaiah 28:10 ESV].
Being in a hurry to get a particular aspect of life/Vision or Plan accomplished is not in our power. Everything is timed and planned.
>Ecclesiastes 9:11 (GW)==>“I saw something else under the sun. The race isn’t ⌊won⌋ by fast runners, or the battle by heroes. Wise people don’t necessarily have food. Intelligent people don’t necessarily have riches, and skilled people don’t necessarily receive special treatment. But TIME and unpredictable events overtake all of them.”
The Vision is truly for an appointed time. Every happening is time tagged. > “Even the stork in the sky knows her appointed seasons, and the dove, the swift and the thrush observe the time of their migration. But my people do not know the requirements of the Lord.”[Jeremiah 8:7 NIV].
To Abraham the father of faith the following scriptures speaks of,  >Genesis 17:21 (NKJV)==>“But My covenant I will establish with Isaac, whom Sarah shall bear to you at this set time next year. ” >Genesis 18:10, 14 (NIV)==> 10a)“Then one of them said, “I will surely return to you about this time next year, and Sarah your wife will have a son.”… 14)Is anything too hard for the LORD? I will return to you at the appointed time next year, and Sarah will have a son.”
Abraham’s fruitfulness was timed. It wasn’t a mistake that in all the years of ‘delay'(25years) he didn’t have the child of promise through Sarah. As every other human being, he was pressured, hence he tried to help God actualise the promise of fruitfulness in his life[he forgot the race is not to the swift]; God told him point blank:
> “As for Ishmael, I have heard you; behold, I have blessed him and will make him fruitful and multiply him greatly. He shall father twelve princes, and I will make him into a great nation. But I will establish my covenant with Isaac, whom Sarah shall bear to you at this time next year.”[Genesis 17:20-21 ESV].
No thwarting of God’s plan or vision or purpose. As He planned, so shall it always turn out. Isaac is the covenant child and his birth yet for an appointed time. The import of Ishmael via the strategy of Abraham/Sarah
/Hagar, does not confer the promise on him, the child of promise remains Isaac as the Lord had planned from the foundations of the earth and this Isaac has a preordained time before he would show up on this side of eternity.
>“For the LORD of hosts has purposed, And who will annul it? His hand is stretched out, And who will turn it back?”[Isaiah 14:27 NKJV].
Beloved take note, you can’t force God to swap His plan for yours. Ishmael couldn’t take the place of Isaac, yet God didn’t hasten before His already appointed time, to bring Isaac[He came at the appointed time]. Your promise and vision too will come at its appointed time.
Still on father Abraham, he always had his bouts of doubt. On the subject of his possession as promised by God, Abraham was troubled as to who will inherit all the blessings, because he had no child of his own. In his human estimation, it was looking close like his trusted servant, Eliezer, will be the one to take over his inheritance…but God said No! Yet father Abraham still was shaky >Genesis 15:8 (NLT)==>“But Abram replied, “O Sovereign Lord, how can I be sure that I will actually possess it?”
God had to take him through some  vivid exercise to prove that His promise won’t fail. To seal His proof, He gave Abraham the Timing of the fulfillment of the said promise.
> “Then the Lord said to Abram, “You can be sure that your descendants will be strangers in a foreign land, where they will be oppressed as slaves for 400 years.”[Genesis 15:13 NLT].
The Bible says >“Weeping may last through the night, but joy comes with the morning.”[Psalms 30:5 NLT].
There’s a timing to your blessing. >“Now I am here to explain what will happen to your people in the future, for this vision concerns a time yet to come.”[Daniel 10:14 NLT].
And > “…in just a little while, the Coming One will come and not delay.” [Hebrews 10:37 NLT].
“He made the moon to mark the seasons; the sun knows its time for setting.”[Psalms 104:19 ESV].
>Luke 24:49 (NKJV)==>“Behold, I send the promise of My Father upon you; but tarry  in the city of Jerusalem until you are endued  with power from on high.”.
Beloved, wait for your appointed time. Don’t put the cart before the horse…>“For THE VISION IS YET FOR AN APPOINTED TIME; But at the end it will speak, and it will not lie. Though it tarries, wait for it; Because it will surely come, It will not tarry.”[Habakkuk 2:3 NKJV].
Prayer Action:
-Sing praises to God.
-Burst forth in the Spirit and speak fervently for 15 minutes.
-Commune with God, and ask Him to have His way in your life[in every situation and every path, His plan and counsel alone should stand].
-Pray for grace to cheerfully follow His plan ( the ability to wait without pressure or frustration) till your appointed time comes.
• THERE’S AN APPOINTED TIME FOR EVERY PROMISE. 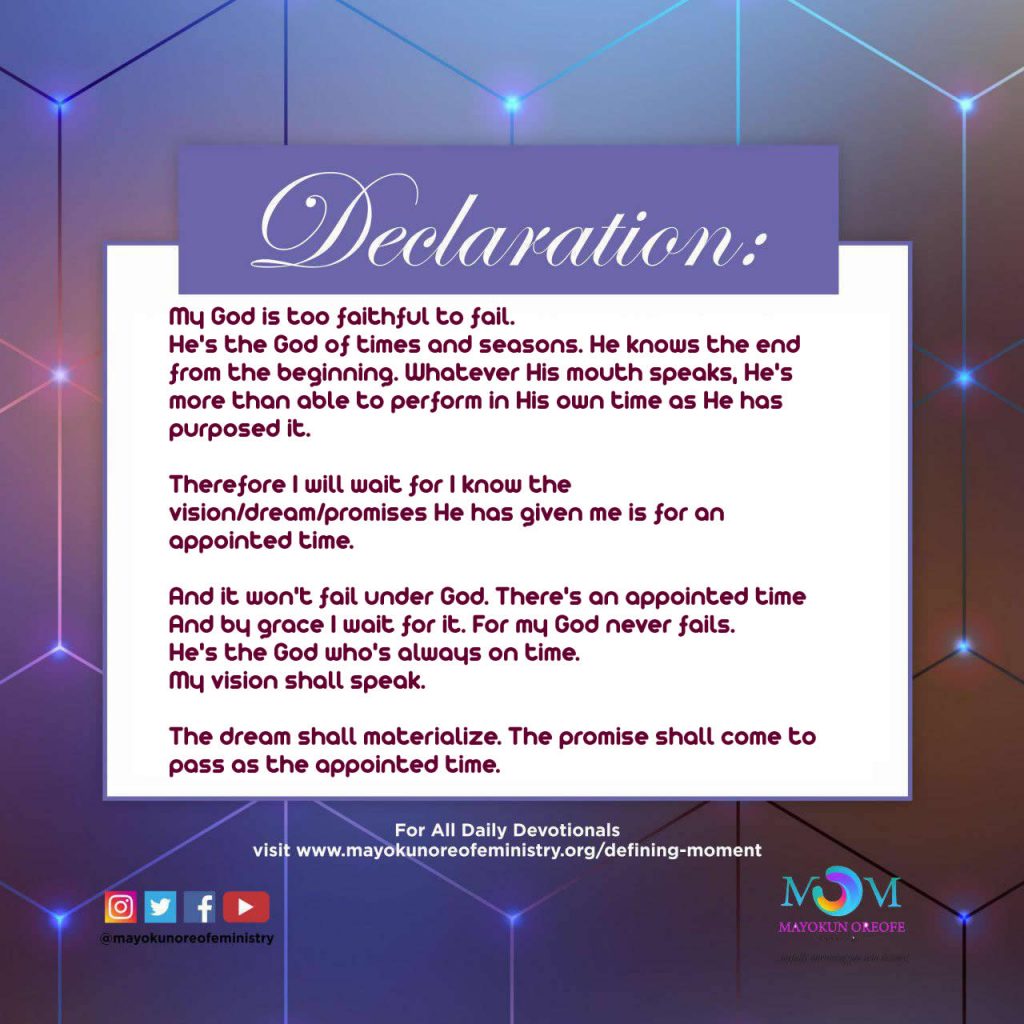