Word Study For Today: The Book Of Psalm Chapter 135.

Devotion: THERE IS AN INTENT.

God in the beginning, [before anyone of us knew ourselves, whilst we were yet in His mind, before we were ever formed in our mother’s womb], had an intention. He didn’t create anything for the sake of mere creating. He had an intent for every single creation of His. There’s an original intention for the existence of whatever exists today, tomorrow and forever.

An intent is something that is intended; purposed; designed or mapped out to be. >“Should I hide my plan from Abraham?” the Lord asked.”[Genesis 18:17 NLT]▪️

God has a plan, an intent. He didn’t just arrive at doing stuff, He had and still maintains His original intent.

From this scripture it’s clear, the sky isn’t just in existence today for sake of merely existing, the original intent of God is for the sky to be a space that separates the waters above from waters below. That is the very purpose of the sky. Scripture says God has thoughts, God has counsel (intent). >“But they do not know the thoughts of the LORD, Nor do they understand His counsel; For He will gather them like sheaves to the threshing floor.”[Micah 4:12 NKJV]▪️

That we do not know His plans and intents does not rule out the fact that there’s no basis for doing what He does. He is God remember?. He can do whatever He likes, yet no one would be able to query Him; but beloved, beyond just mere impressing humanity that He is God, hence creating or doing whatever pleases Him, God is intentional. God is deliberate. God is well calculated.

>“He said to me, “Son of man, watch and listen. Pay close attention to everything I show you. You have been brought here so I can show you many things. Then you will return to the people of Israel and tell them everything you have seen.”[Ezekiel 40:4NLT]▪️

Ezekiel wasn’t just taken to that location for the fun of it. He was taken there to see things, hence was told- “pay attention to what you see”. The intent of God for bringing him in there was to see. Now, even his seeing wasn’t just for sight seeing; he was taken to see, so he could be able to tell it back to the children of Israel. There was a purpose for his being shown all the things he was exposed to.

He knew Jeremiah, He knew you also before He formed you in the womb. He didn’t just form in the womb that foetus, He did with an intent. In the case of Jeremiah, His intent was to have a prophet in Jeremiah.

Be alert, be aware, child of God, you are in existence for the sake of a very clear intent of God. If you don’t yet know it, you need to seek it out fast (as Jeremiah found out his). When you don’t know God’s original intent or plan for your life, you will scheme and devise every sort of assignment for yourself, which the Master Planner never intended for you. That is error! >“Woe to the rebellious children,” says the LORD, “Who take counsel, but not of Me, And who devise plans, but not of My Spirit, That they may add sin to sin;”[Isaiah 30:1 NKJV]▪️

Not knowing the intent of God, is poverty borne out of foolishness. Knowing God’s intent, yet not following in His steps is a deliberate move of breaking bond or tie with God, Who’s you are. That also is obvious foolishness. Not knowing or not following God’s Master Plan is a dangerous place to be. >“Now no man at the table knew for what intent he spake this unto him.”[John 13:28 KJV]▪️

Jesus spoke yet none of the disciples at the table knew His intent of saying so. It implies nobody was thinking His thoughts nor probing same. Beloved it ought not to be so. >20)“Knowing this first, that no prophecy of the scripture is of any private interpretation. 21)For the prophecy came not in old time by the will of man: but holy men of God spake as they were moved by the Holy Ghost.”[2 Peter 1:20-21 KJV]▪️

Never assume things just happen, nothing is ever for no reason, but always and ever, seek the intent of God behind every occurrence. Life becomes easier when His counsel stands. >9)“For He spoke, and it was done; He commanded, and it stood fast. 11)The counsel of the LORD stands forever, The plans of His heart to all generations.[Psalms 33:9, 11, NKJV]▪️

For when it comes to God, THERE IS AN INTENT. THE INTENT OF THE LORD STANDS FIRM.

-Praise God Who knows and does all things.

-Pray in the language of the Spirit for 15 minutes.

-Ask the Lord to reveal per time, His intent (plan) to you as He did to Abraham.

-Cry out to Him to expound His intent of your existence to you, so you don’t miss your track in life. 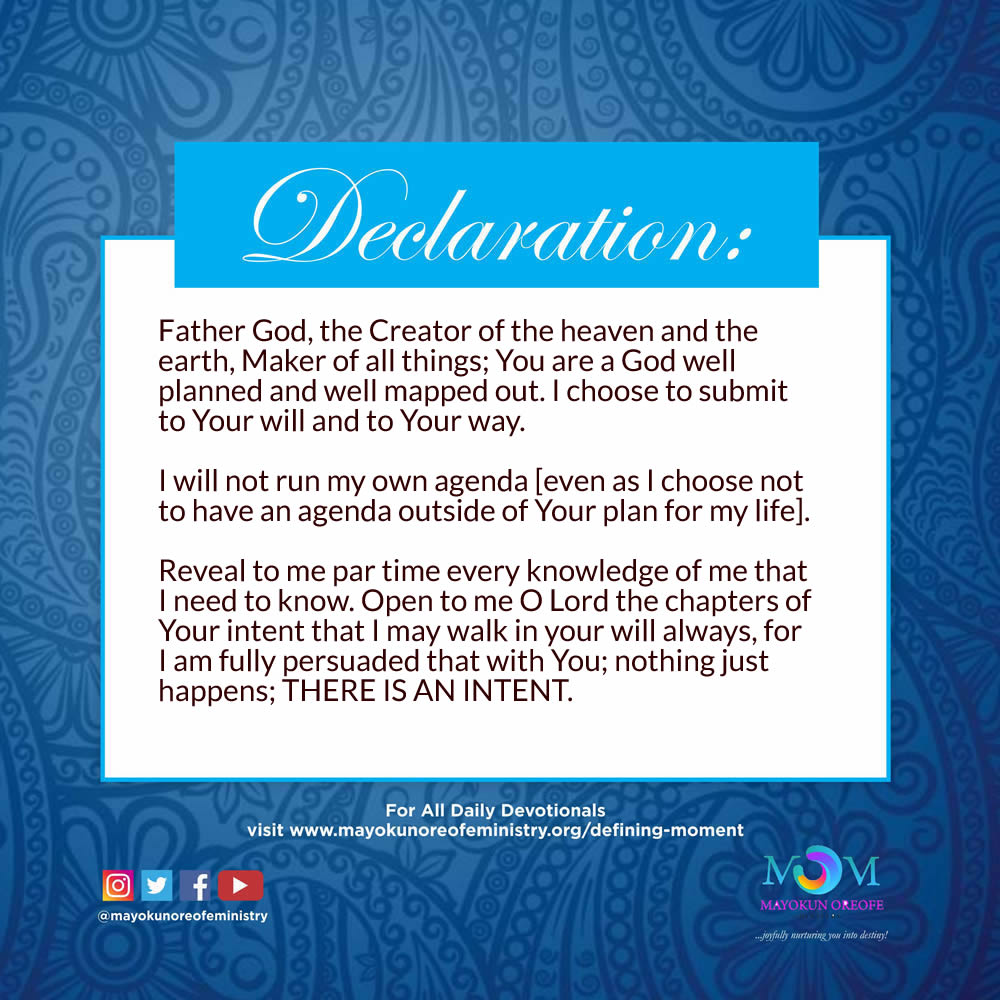