Word Study For Today: The Book Of Psalm Chapter 139.

The Voice is an expression in spoken or written words; it’s sound from speech conveying impressions to the mind. Every living thing have voice(animal and human being); hence there are many voices.

Human beings in particular have voice. Beloved, YOU have voice. >“I cried to the LORD with my voice, And He heard me from His holy hill. [Psalms 3:4 NKJV]▪️ >“My voice You shall hear in the morning, O LORD; In the morning I will direct it to You, And I will look up.”[Psalms 5:3 NKJV]▪️

The wise have voice and so also does fools give voice. >“Wisdom calls aloud outside; She raises her voice in the open squares.” [Proverbs 1:20 NKJV]▪️>“For a dream comes through much activity, And a fool’s voice is known by his many words.” [Ecclesiastes 5:3 NKJV]▪️

When humans speak then  their voice is heard just as when the animals utter their sound. >“So Jacob went near to Isaac his father, and he felt him and said, “The voice is Jacob’s voice, but the hands are the hands of Esau.”[Genesis 27:22 NKJV]▪️ >Genesis 16:2c (NKJV)says==>…And Abram heeded the voice of Sarai.”▪️ >“So Moses heeded the voice of his father-in-law and did all that he had said.”[Exodus 18:24 NKJV]▪️

Even God hears the voice of His best creation(human beings) when they speak. >“And God heard the voice of the lad. Then the angel of God called to Hagar out of heaven, and said to her, “What ails you, Hagar? Fear not, for God has heard the voice of the lad where he is.”[Genesis 21:17 NKJV]▪️>”When we cried out to the LORD, He heard our voice and sent the Angel and brought us up out of Egypt; now here we are in Kadesh, a city on the edge of your border.”[Numbers 20:16 NKJV]▪️>“Then the LORD heard the voice of your words when you spoke to me, and the LORD said to me: ‘I have heard the voice of the words of this people which they have spoken to you. They are right in all that they have spoken.”[Deuteronomy 5:28 NKJV]▪️ >“In my distress I called upon the LORD, And cried out to my God; He heard my voice from His temple, And my cry entered His ears.”[II Samuel 22:7 NKJV]▪️

There is life in the blood; the blood has a voice. >“And He said, “What have you done? The voice of your brother’s blood cries out to Me from the ground.”[Genesis 4:10 NKJV]▪️>“to Jesus the Mediator of the new covenant, and to the blood of sprinkling that speaks better things than that of Abel.”[Hebrews 12:24 NKJV]▪️

The greatest Voice ever which is to be cherished, sought and heeded is the Voice of God. >“The LORD thundered from heaven, And the Most High uttered His voice, Hailstones and coals of fire.”

The Voice of our God is powerful, it shatters, it fixes, it rebukes and corrects, it heals and soothes. His voice instructs and gives direction. God’s Voice should be sought and when heard should be heeded. God’s Voice should not be trivialized for its not everyone who hears His voice. Don’t joke nor commonsense when you hear it, rather heed it. >“And Pharaoh said, “Who is the LORD, that I should obey His voice to let Israel go? I do not know the LORD, nor will I let Israel go.”[Exodus 5:2 NKJV]▪️>“He is our God, And we are the people of His pasture, And the sheep of His hand. Today, if you will hear His voice: “Do not harden your hearts, as in the rebellion, As in the day of trial in the wilderness,”[Psalms 95:7-8 NKJV]▪️ >“because Abraham obeyed My voice and kept My charge, My commandments, My statutes, and My laws.”[Genesis 26:5 NKJV]▪️>“In your seed all the nations of the earth shall be blessed, because you have obeyed My voice.”[Genesis 22:18 NKJV]▪️

His Voice may you hear and recognize; may His Voice affirm you as He did Jesus Christ His son. >“And suddenly a voice came from heaven, saying, “This is My beloved Son, in whom I am well pleased.”[Matthew 3:17 NKJV]▪️

Child of God choose His Voice over and above the many loud and even silent voices.

-Lift up your voice in worship of God.

-Pray that the voice of the enemy and it’s echo via other means, shall never be your command(you will never heed it’s voice)

-Ask that the Lord’s Voice will reach out to you this day[giving you direction even as it instructs you; rebuking and correcting you in areas you have erred; informing you whatever you need to know].

-Pray that the voice of another you will not yield to except the Voice of the Lord, your true Shepherd.

-Pray that the Voice of the Blood of Jesus Christ will silence every contradicting voice speaking against you even as His voice speaks better things on your behalf. 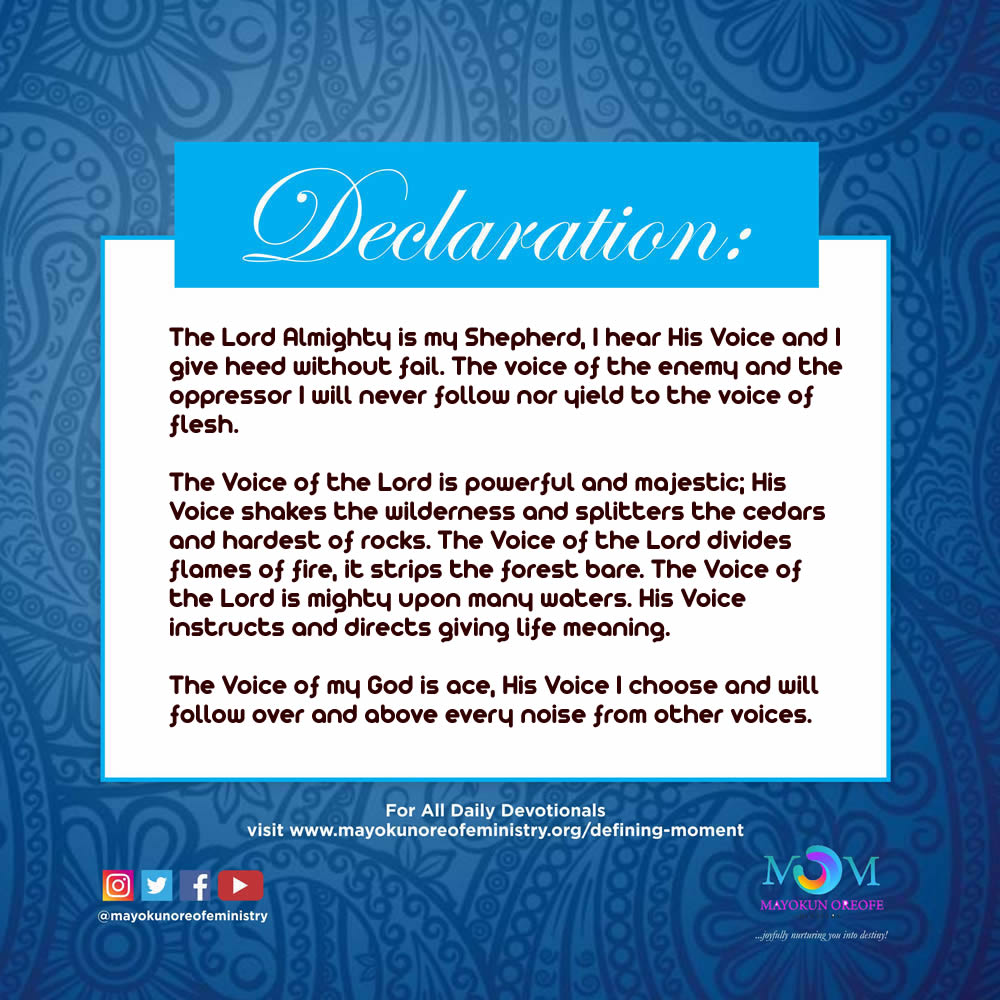