Word Study for Today: The Book of Psalm Chapter 89.

Devotion:  WHAT A SACRIFICE, WHAT A PRICE!

He became jittery of this day. He almost didn’t go through it anymore. The thought of what it would entail made Him develop cold feet. >Matthew 26:36-38 (NKJV)==> 36) “Then Jesus came with them to a place called Gethsemane, and said to the disciples, “Sit here while I go and pray over there.” 37) And He took with Him Peter and the two sons of Zebedee, and He began to be sorrowful and deeply distressed. 38)Then He said to them, “My soul is exceedingly sorrowful, even to death. Stay here and watch with Me.”▪️

The agony of the procedure of the climax of His coming fell on Him. He was depressed, and He switched to negotiating with His Father, (the One Whose idea all of these redemption plan is). Jesus the Son of God, I mean God in human form, became extremely sorrowful, yet in context, that was the start of the happy days for humanity.

He was asking “do I really have to go this route?” “Can’t this salvation plan be accomplished in another way?” These thoughts and questions were so strong on His mind; but the purpose, the game plan too was before Him. There was a pull, a tug of war, a battle for to go or to decline the path.

42)Again, a second time, He went away and prayed, saying, “O My Father, if this cup cannot pass away from Me unless I drink it, Your will be done.”▪️

He remembered the original intent, the deal and what all of these meant to the Father; and He summoned up courage and surrendered His will for the bigger picture- the Will of the Father. He made a decision to dive into it all the way. He chose to pay the price of not only a high calling here, but the highest calling. He chose the path of sacrifice >Hebrews 12:2b (NKJV)==> “…who for the joy that was set before Him endured the cross, despising the shame…▪️

He cropped up the prize, hence He surrendered to paying the price.

Sacrifices are not for nothing. When you give up something, there’s always an exchange that follows, >>> you earn something in return. >“For God is not unrighteous to forget your work and labour of love, which ye have shewed toward his name…”[Hebrews 6:10a KJV]▪️

He is such a faithful God. He weighs the sacrifices of everyone including that which His Son, Jesus Christ paid.

God weighed it. The price of salvation is heavy. The value proposition of Christ is high. No one else can match it. It was a sorrowful path, [but He chose to honour His Father]. Selah!

>26)“…when he had scourged Jesus, he delivered him to be crucified.”28) “And they stripped him, and put on him a scarlet robe. 29)And when they had platted a crown of thorns, they put it upon his head, and a reed in his right hand: and they bowed the knee before him, and mocked him, saying, Hail, King of the Jews! 30)And they spit upon him, and took the reed, and smote him on the head. 31)And after that they had mocked him, they took the robe off from him, and put his own raiment on him, and led him away to crucify him.”[Matthew 27:26b, 28-31 KJV]▪️

In all of these and more, as He went through the process of His sacrifice, He said nothing; He kept mute, never bragged His size, never bragged His position, He chose the path, though ridiculing. >Matthew 27:12-14 (KJV)says ==>12)“And when he was accused of the chief priests and elders, he answered nothing. 13)Then said Pilate unto him, Hearest thou not how many things they witness against thee? 14)And he answered him to never a word; insomuch that the governor marveled greatly.”▪️

What a sacrifice! >“But he was wounded for our transgressions, he was bruised for our iniquities: the chastisement of our peace was upon him; and with his stripes we are healed. 7)He was oppressed, and he was afflicted, yet he opened not his mouth: he is brought as a lamb to the slaughter, and as a sheep before her shearers is dumb, so he openeth not his mouth.”[Isaiah 53:5, 7KJV]▪️

What a sacrifice, what a price! >“For he hath made him to be sin for us, who knew no sin; that we might be made the righteousness of God in him.”[2 Corinthians 5:21KJV]▪️

Jesus paid the price, though He was God >Philippians 2:6(NKJV)==> “who, being in the form of God, did not consider it robbery to be equal with God,”▪️

>“And being found in appearance as a man, He humbled Himself and became obedient to the point of death, even the death of the cross.  [Philippians 2:8 NKJV]▪️

To pay the price, His sacrifice caused Him to humble Himself [never thought it robbery to have to become a man, though He was God in all ramifications] …He obeyed to the point of death, even a shameful death. >9)Therefore God also has highly exalted Him and given Him the name which is above every name, 10)that at the name of Jesus every knee should bow, of those in heaven, and of those on earth, and of those under the earth, 11)and that every tongue should confess that Jesus Christ is Lord, to the glory of God the Father.” [Philippians 2:9-11 NKJV]▪️

After paying the Price, the Prize was inevitable, because God remains faithful; hence caused His sacrifice to badge Him His Name!

A name above that of every other who has ever and will ever live/exist. He became highly and most exalted. At the mention of His name, all knee is bound to bow, tongues everywhere to confess Him as Lord. What a prize for such price paid with His dear blood. He earned His seat and He has all things under His feet. >> >20)“…seated Him at His right hand in the heavenly places, 21)far above all principality and power and might and dominion, and every name that is named, not only in this age but also in that which is to come. 22)And He put all things under His feet, and gave Him to be head over all things to the church,” [Ephesians 1:20b-22NKJV]▪️

Scripture has been fulfilled, for God will never lie. >“For David himself said by the Holy Spirit: ‘The LORD said to my Lord, “Sit at My right hand, Till I make Your enemies Your footstool.”[Mark 12:36NKJV]▪️

It didn’t just happen, He didn’t merely stumble into it >>> He was deliberate and well calculated about it.

WHAT A SACRIFICE, WHAT A PRICE!

**Worship the Lamb that was slain.

**Pray in the language of heaven for an extended period, [worshiping, thanking, appreciating the One Who paid the price for your eternity space and placement]. 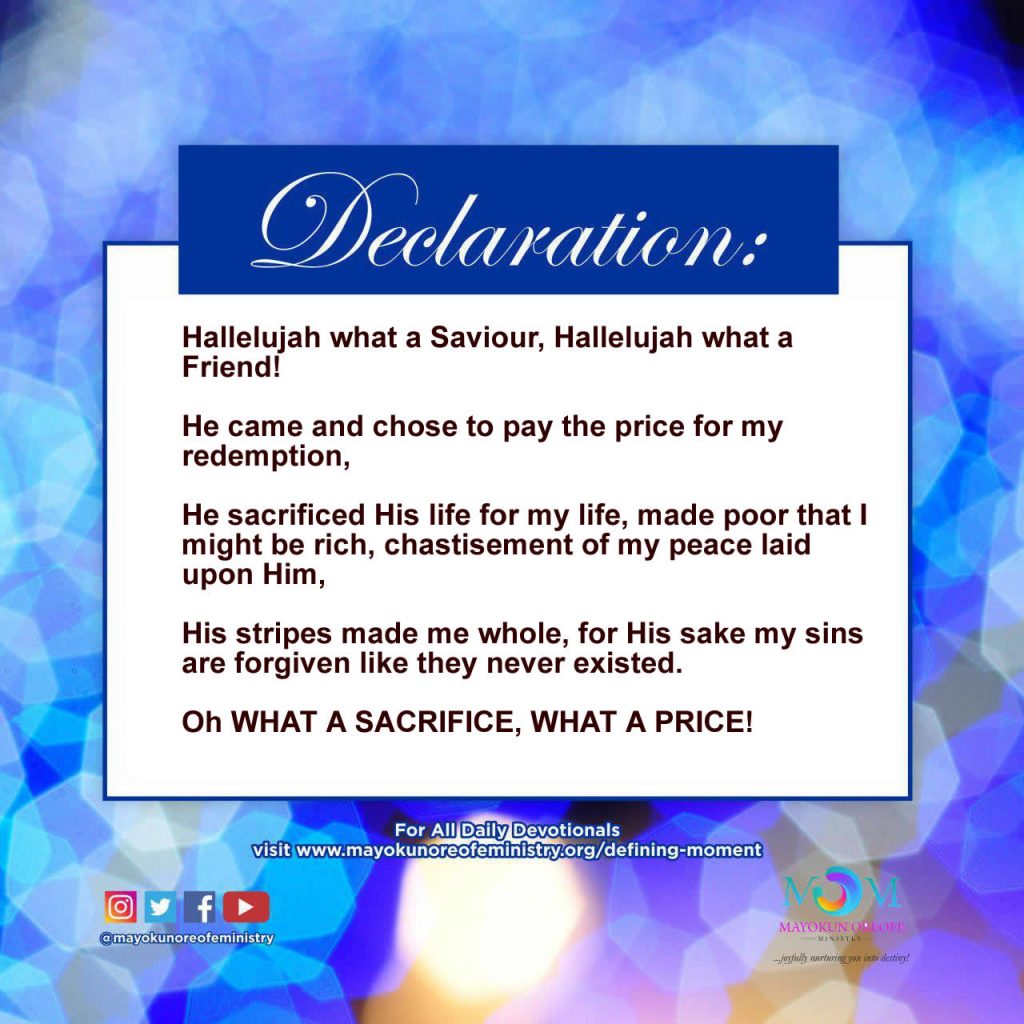