Word Study For Today: The Book Of Psalm Chapter 88.

Devotion: WHAT A WONDERFUL NAME!

God’s Name! It’s a name that carries with it a long standing reputation and authority. A name to be highly revered and honoured.

Talk of the God Who’s names are inexhaustible, that is the God we serve.

His names are not mere appellations, they are not ordinary, they carry power, creative abilities, amongst other things. Different tribes and tongues acknowledge Him in their native tongues, to attest to His mightiness.

No matter the significance and essence that every other name carries, they are nothing compared to HIS NAME.

> For My name shall be great among the nations,” Says the LORD of hosts.”[Malachi 1:11NKJV]▪️

He is God from the beginning, the Creator of all things whom no one created. The world and all that is found in it was at His instance. He is called the Beginning, because truly He is the Beginning of all things; He also is the End [for He alone will last till the very end, though was at the Beginning]. >““I am the Alpha and the Omega, the Beginning and the End,” says the Lord, “who is and who was and who is to come, the Almighty.”[Revelation 1:8NKJV]▪️

He is Ageless, yet Ancient. >“I watched till thrones were put in place, And the Ancient of Days was seated; His garment was white as snow, And the hair of His head was like pure wool. His throne was a fiery flame, Its wheels a burning fire;”[Daniel 7:9 NKJV]▪️

Such as man is called by the name of his offspring, so also God has His name in His children; this I call His covenant name. >“Moreover God said to Moses, “Thus you shall say to the children of Israel: ‘The LORD God of your fathers, the God of Abraham, the God of Isaac, and the God of Jacob, has sent me to you. This is My name forever, and this is My memorial to all generations.’”[Exodus 3:15NKJV]▪️ He is EL Shaddai, >>>> “The Mighty One of Jacob” according to >Genesis 49:24==>“But his bow remained in strength, And the arms of his hands were made strong By the hands of the Mighty God of Jacob (From there is the Shepherd, the Stone of Israel),”▪️ >>>God Almighty (the One with ultimate power over all.>“How he swore to the LORD, And vowed to the Mighty One of Jacob”[Psalms 132:2NKJV]▪️

He alone is the One answer fits all. Solution to every puzzle, Arsenal of possibilities. The Essence. > Exodus 3:14 (NKJV)==>“And God said to Moses, “I AM WHO I AM.” And He said, “Thus you shall say to the children of Israel, ‘I AM has sent me to you.’ ”▪️

The Provider of all times. He is Jehovah Jireh >>> the name memorialized by Abraham when God provided the ram to be sacrificed in place of Isaac. >Genesis 22:14(NKJV)==>“And Abraham called the name of the place, The- LORD -Will-Provide; as it is said to this day, “In the Mount of the LORD it shall be provided.”▪️

In His nature of holiness, He makes His people holy >>> Jehovah Mehkaddesh >>> “The Lord Who Sanctifies, The One Who Makes Holy >Leviticus 20:8 (NLT)==> “Keep all my decrees by putting them into practice, for I am the Lord who makes you holy.”▪️

Entrenched in His name is Peace, He is our Peace ->>> Jehovah Shalom >Judges6:24 (NLT)==>“And Gideon built an altar to the Lord there and named it Yahweh-Shalom (which means “the Lord is peace”). The altar remains in Ophrah in the land of the clan of Abiezer to this day.”▪️>(NJKV)==>“So Gideon built an altar there to the LORD, and called it The- LORD – Is -Peace. To this day it is still in Ophrah of the Abiezrites.”▪️

Can His name ever be exhausted? Even in contemporary times, men have given Him the name Jehovah Over-Do, for He does over and above the expected >“Now to Him who is able to do exceedingly abundantly above all that we ask or think, according to the power that works in us,”[Ephesians 3:20NKJV]▪️

His name is Commander in Chief of the heavenly force  >>> Jehovah Sabaoth >The Lord of Hosts. >Isaiah 1:24NKJV)==> “Therefore the Lord says, The LORD of hosts, the Mighty One of Israel, “Ah, I will rid Myself of My adversaries, And take vengeance on My enemies.”▪️>Psalms 46:7(NKJV)==>“The LORD of hosts is with us; The God of Jacob is our refuge.”▪️

He is EL-Gibbor >>>Mighty God, Mighty Warrior. >“The Lord your God is with you, the Mighty Warrior who saves. He will take great delight in you; in His love He will no longer rebuke you, but will rejoice over you with singing.”[Zephaniah 3:17NIV]▪️

EL-Roi >>>He is the Seeing God. He created the eyes shall He Himself not see? Hagar can answer this experientially, for in her distress the Lord saw her. >Genesis 16:13(NKJV)==>“Then she called the name of the LORD who spoke to her, You-Are-the-God-Who-Sees; for she said, “Have I also here seen Him who sees me?”▪️

Beloved, to you, what’s HIS NAME?

-Sing aloud in praise of the Lord Most High.

-Praise Him in tongues for 15 minutes.

-Call Him by HIS NAME(s) and activate His essence in your life and situation. 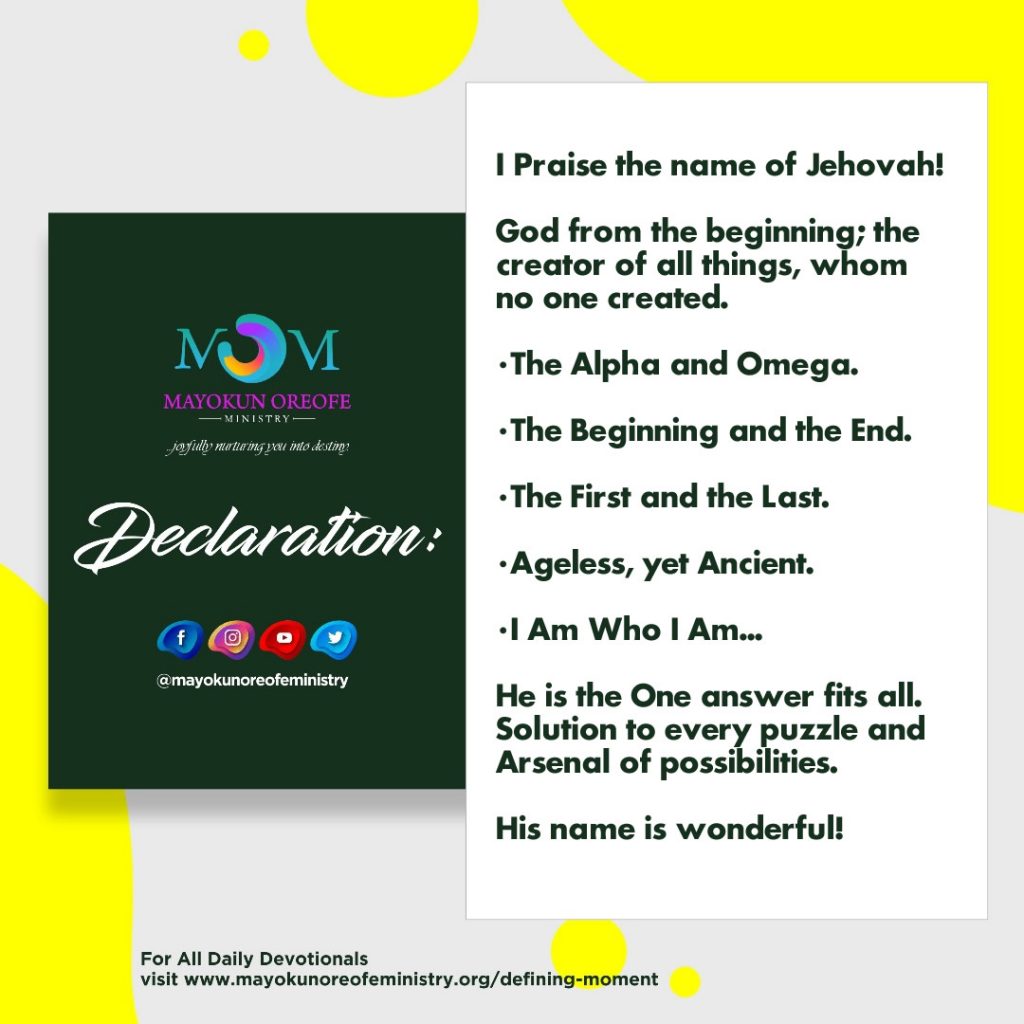