Word Study for Today: The Book of Psalm Chapter 86.

Heard some people say before, “What’s in a name?” And that’s not intended as just a mere or innocent inquiry; it’s loaded with the heavy tone of trivialising the importance or significance of a name. Dictionary says, a name is a word or a combination of words by which a person, place, or thing is designated, called, or known. From that definition, perhaps it can be dismissively asked “What’s in a name?” Thinking deeply however, you would know there is much in a name. In fact, I say ‘a name is everything’.

God the creator of all things, (animal, human, place, and even things) ordained it so; that there’s much, so much in a name.

God brought everything He created to Adam (His creation) to name each one. This is not prompted out of carelessness or insignificance attached by God to names; rather it’s a very crucial thing. As can be seen in > Genesis 2:19-20a(NKJV)==>19) “Out of the ground the LORD God formed every beast of the field and every bird of the air, and brought them to Adam to see what he would call them. And whatever Adam called each living creature, that was its name. 20)So Adam gave names to all cattle, to the birds of the air, and to every beast of the field…▪️

Scripture says, ‘whatever Adam called (named) each creature, that it bore’. Very profound. Adam looked at every creature, saw their composition, mannerism/behavioural pattern and named them. At that instance, each one began to behave and act/function/manifest accordingly; according to the name it bore.

Till date, manufacturers would name a product in accordance with the purpose it was invented/manufactured. Who says there isn’t anything in a name?

Still on Adam, in Genesis 2:22-23(NKJV) > Then the rib which the LORD God had taken from man He made into a woman, and He brought her to the man. And Adam said: “This is now bone of my bones And flesh of my flesh; She shall be called Woman, Because she was taken out of Man.””▪️

He looked at the new creation which was the only creature so far that looked like him, and called her ‘woman’… for he saw everything is same… so basically she wasn’t different, and could have also being called a man, or ‘boneman’, or ‘fleshman’ [since he saw she had his bones and his flesh], but Adam realised a vital feature that is peculiar to this creature and which will inform her operations- the womb, hence he named her woman’.

Who says there’s nothing in a name?

Abram had a name, Sarai also had a name, but when God needed them to function in a particular order, He changed their names. That is such a significant thing and so worthy of note. It implies and affirms that your manifestation/operation/function etc. is coded in your name. Your life and it’s expressions takes root in your name, hence shoots out as fruits of that root. A seed called mango will shoot out as a fruit called mango. >And Abram said in Genesis 15:3 (NIV)==>, “You have given me no children; so a servant in my household will be my heir.”▪️

>1)“Now Sarai, Abram’s wife, had borne him no children. But she had an Egyptian slave named Hagar; 2)so she said to Abram, “The Lord has kept me from having children. Go, sleep with my slave; perhaps I can build a family through her.” Abram agreed to what Sarai said.”[Genesis 16:1-2 NIV]▪️

They (Abram and Sarai) had no children together, (because Abram had Ishmael via Hagar)… their combo did not click as parents. The coding in the two names did not tally. Who says there is nothing in a name?

Is it a coincidence that when God was ready to give them a child, He had to deal with their root so they can have an off shoot. No wonder, Abram and Sarai’s name were changed to Abraham and Sarah and this changed their function/performance/expression/manifestation code. >Genesis 17:1-6, 15-16 (NIV)==>1)“When Abram was ninety-nine years old, the Lord appeared to him and said, “I am God Almighty; walk before me faithfully and be blameless. 2)Then I will make my covenant between me and you and will greatly increase your numbers.” 3)Abram fell facedown, and God said to him, 4)“As for me, this is my covenant with you: You will be the father of many nations. 5)No longer will you be called Abram; your name will be Abraham, for I have made you a father of many nations. 6)I will make you very fruitful; I will make nations of you, and kings will come from you.

15)God also said to Abraham, “As for Sarai your wife, you are no longer to call her Sarai; her name will be Sarah. 16)I will bless her and will surely give you a son by her. I will bless her so that she will be the mother of nations; kings of peoples will come from her.””▪️

Oh Wow! At Ninety-nine? Name change? Why? I thought there wasn’t anything to a name? >1)“Now the Lord was gracious to Sarah as he had said, and the Lord did for Sarah what he had promised. 2)Sarah became pregnant and bore a son to Abraham in his old age, at the very time God had promised him. 5)Abraham was a hundred years old when his son Isaac was born to him.”[Genesis 21:1-2, 5 NIV]▪️

Awesome! Exactly a year after the name change from Abram and Sarai, to Abraham and Sarah, voila- their status/manifestation/operation/disposition/expression changed. What they sobbed about before suddenly turned to laughter.

Perhaps our tears of today is fueled by our root (name), hence our fruit. Scriptures says >“A good name is to be chosen rather than great riches…” [Proverbs 22:1a NKJV]▪️

Who then dare say WHAT’S IN A NAME?

**Worship the Lord whose name is the Almighty.

**Pray for 15minutes in the language that decodes His roots.

**Pray that the Lord will walk through your manifestation/expressions/operations and see if it aligns with His expectation and ordination.

**Ask that the Lord will do a corrective surgery upon your identity- (name) today if need be, just as it was necessary for Abram and Sarai. 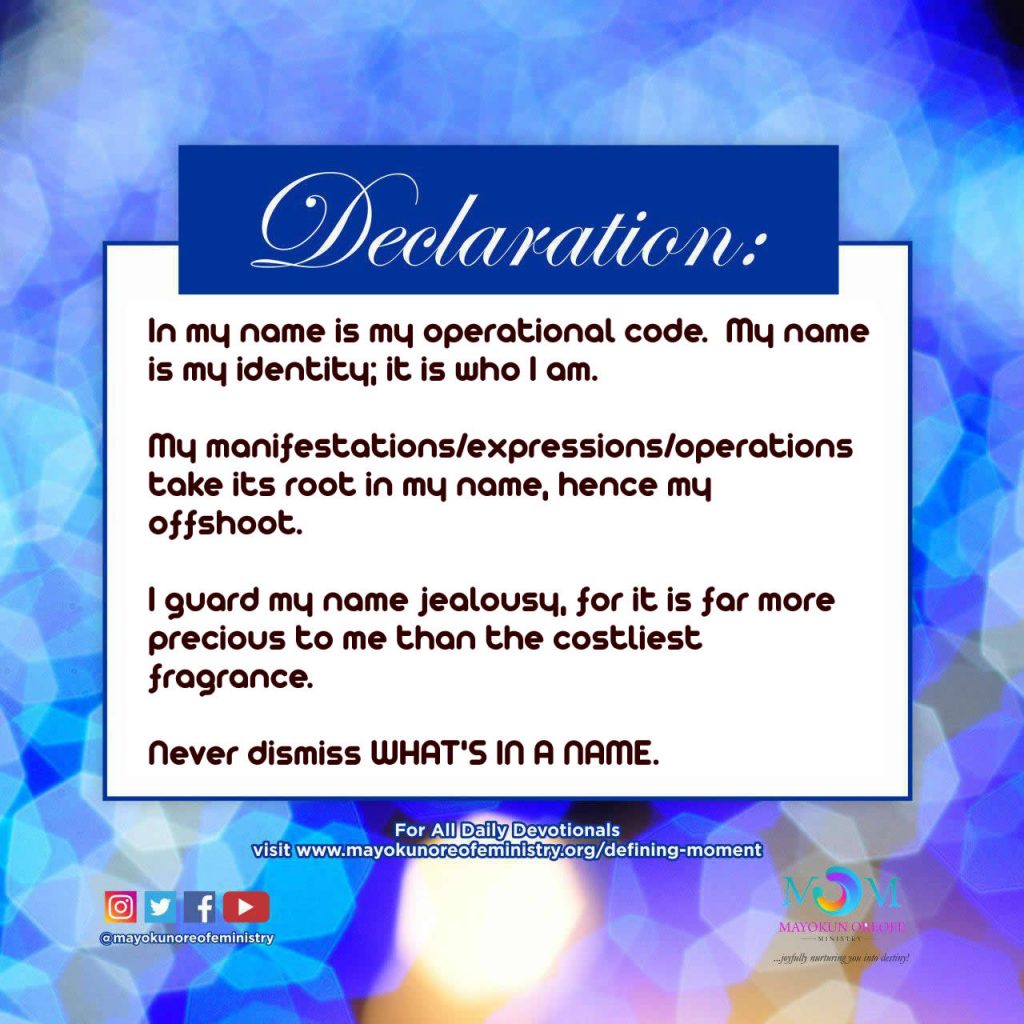