Certainly our God is in the business of making the Crooked Paths Straight. There is a weight of glory that awaits us after all the crookedness of the path we tread. It won’t always be rough, God will smoothen it out, He’s promised. >“Our light affliction, which lasts but for a moment, works for us a far more exceeding and eternal weight of glory,” [2 Corinthians 4:17 MEV]

This glory does not only await us at home-calling, but even on this side of the divide, glory yet awaits us. The bitter waters shall become sweet. >“Tears of joy will stream down their faces, and I will lead them home with great care. They will walk beside quiet streams and on smooth paths where they will not stumble. For I am Israel’s father, and Ephraim is my oldest child.”[Jeremiah 31:9NLT]

No more stumbling (rising and falling); at last stability is assured. You will weep for joy when the Lord arises as He’s purposed to do; He will create a pathway where there seemed to be no way. Water will gush out from the wilderness because He has determined to bring an end to the crookedness of the journey. >“Listen carefully, I am about to do a new thing, Now it will spring forth; Will you not be aware of it? I will even put a road in the wilderness, Rivers in the desert.”[Isaiah 43:19 AMP]

Rivers in the desert? Oh yes, that’s an expression of straightening the Crooked Paths. What didn’t function will begin to function. What was impossible will, become possible. All of these are in His agenda when He said in >Isaiah 40:4-5(NKJV)==>4)“Every valley shall be exalted And every mountain and hill brought low; The crooked places shall be made straight And the rough places smooth; 5)The glory of the LORD shall be revealed, And all flesh shall see it together; For the mouth of the LORD has spoken.”

His mouth has spoken it and without a doubt He is a Doer, so His Hands shall perform it. He will still the storm, quieten the rising ocean, and get His people to walk in peace without the fear of death. Captives will be set free. Beloved, the seemingly ugly will suddenly become beautiful to behold. >“I will return her vineyards to her and transform the Valley of Trouble into a gateway of hope. She will give herself to me there, as she did long ago when she was young, when I freed her from her captivity in Egypt.”[Hosea 2:15 NLT]

All of these daughters of Zion had a very crooked story such that it’s hard to reconcile the ‘twist’ that listed them in Matthew 1, the genealogy of Jesus Christ.

That was CROOKED PATH MADE STRAIGHT, when in wisdom God moved Rahab to hide and help the spies He had sent to spy out the land. Rahab a harlot, was picked by the Hand of the Lord who Straightens up the-‘twisted’ path, and cleanses a messed up life.

>“Joshua son of Nun sent two spies out from Shittim secretly and instructed them: “Find out what you can about the land, especially Jericho.” They stopped at the house of a prostitute named Rahab and spent the night there.”[Joshua 2:1 NET]

>“Yet Joshua spared Rahab the prostitute, her father’s family, and all who belonged to her. She lives in Israel to this very day because she hid the messengers Joshua sent to spy on Jericho.”[Joshua 6:25 NET]

She saved her entire family when she was wise enough, having been graced by God, to simply harbour His people.

>Micah 4:7 NET)==>“I will transform the lame into the nucleus of a new nation, and those far off into a mighty nation. The LORD will reign over them on Mount Zion, from that day forward and forevermore.”

This scripture so well suits the story of Rahab. Prostitution maimed her, but God the Straightener showed up for her, and she became the nucleus(center) of a totally brand new family. She became the hub. The God of Israel became her God. Word palpably became flesh(manifested).

Tamar, yet another amusing story of the CROOKED PATH MADE STRAIGHT. Oh, Tamar’s unauthored path was so so Crooked and very rough. She had been passed (like tennis ball) from one man to another, having no desired result manifest. She didn’t set out planning her life as such, [am sure]; no one really does. Life happens!. It sometimes can be so bleak on the journey of life that ‘no one will expect any good out of Nazareth’.

God the transformer, does work on our crookedness, turning rough roads to smooth highways without bumps nor hitches. >Genesis 38:28-30(AMP)==>28)“And when she was in labor, one [baby] put out his hand, and the midwife took his hand and tied a scarlet thread on it, saying, “This one was born first.” 29)But he pulled back his hand, and his brother was born first. And she said, “What a breach you have made for yourself [to be the firstborn]!” So he was named Perez (breach, break forth). 30)Afterward his brother who had the scarlet [thread] on his hand was born and was named Zerah (brightness).”

How does one explain Bathsheba becoming the mother of Solomon, David’s heir apparent; despite the mess that ensued between herself and David. Solomon was not the first born child of David, but the God Who makes a way where there seems to be no way, chose of all David’s children, Solomon (the son of the adulteress), to be successor of a man after God’s heart (David). Mystery!

>“David sent word and inquired about the woman. Someone said, “Is this not Bathsheba, the daughter of Eliam, the wife of Uriah the Hittite?”[2 Samuel 11:3AMP]

>“David comforted his wife Bathsheba, and went to her and lay with her; and she gave birth to a son, and David named him Solomon. And the LORD loved the child;”[2 Samuel 12:24 AMP]

>“King David answered, “Call Bathsheba to me.” And she came into the king’s presence and stood before him. 29)Then the king swore an oath and said, “As the LORD lives, who has redeemed my soul from all distress, 30)even as I swore to you by the LORD, the God of Israel, saying, ‘Solomon your son shall certainly be king after me, and he shall sit on my throne in my place’; I will indeed do so this very day.”[1 Kings 1:28-30AMP]

And Ruth doubtless had her CROOKED PATH MADE STRAIGHT. Widowhood and hopelessness, turned around by Boaz the kinsman redeemer.

Beloved, a new thing will the Lord do in your life too, even as >Isaiah 43:19 (MEV)says ==>“See, I will do a new thing, now it shall spring forth; shall you not be aware of it? I will even make a way in the wilderness, and rivers in the desert.” It’s your turn to have your CROOKED PATH MADE STRAIGHT!

-Bow down and intensely worship the Lord.

-Pray in the language of the Holy Spirit.

-Pray that the God of Rahab, Tamar, Ruth and Bathsheba will rise to your Crooked Paths, to Straignten it all up as He did theirs.

-Cry, as desperate as you truly are, that the Lord make a way for you where there currently seems to be no way; smoothening out your rough places. 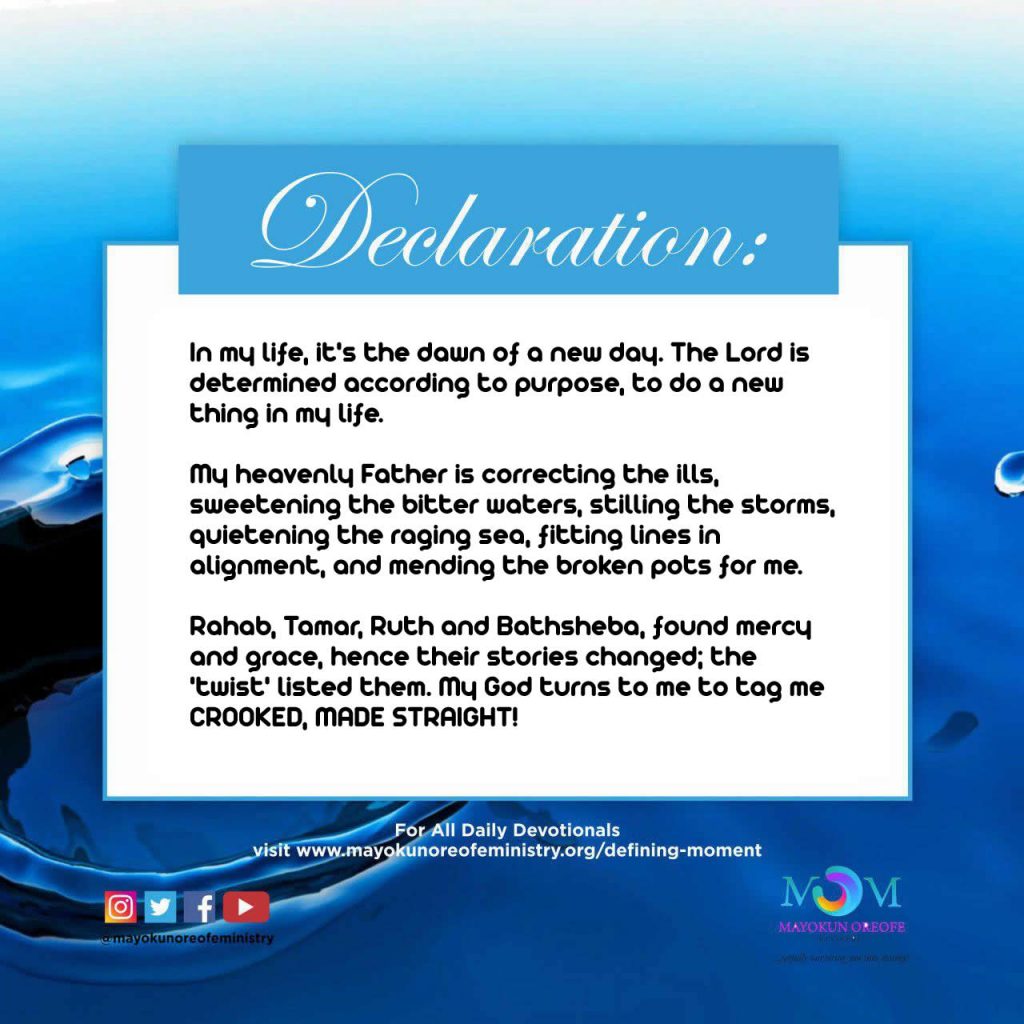